Posted by Christopher A. Brown January 31, 2023
The Value in Customizing a Fatherhood Program
There’s a lot of emphasis these days on implementing fatherhood programs with fidelity. Indeed, many funders of... END_OF_DOCUMENT_TOKEN_TO_BE_REPLACED
Posted by Ave Mulhern January 24, 2023
A Few of My Favorite Things… and they are FREE!
Posted by Christopher A. Brown January 17, 2023
How Father Involvement and Bi-Strategic Parenting Positively Affect Children’s Brain Development

[Free Resources] The Role of Mentoring in Reentry 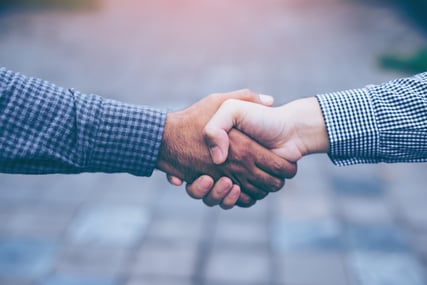 Think about that statement for a moment. What does it mean?

It means you should implement a fatherhood program within a broader array of programs and services that meet fathers’ needs beyond their role as a dad and that, at the same time, help them fulfill that role.

When we train facilitators on National Fatherhood Initiative’s (NFI) programs, we emphasize that best practice. Take the InsideOut Dad® program, for example.

As the PowerPoint® slide below from our training on this program for incarcerated fathers indicates, we encourage facilitators to integrate the program within a larger intervention of cognitive-behavioral programs and other complimentary components. 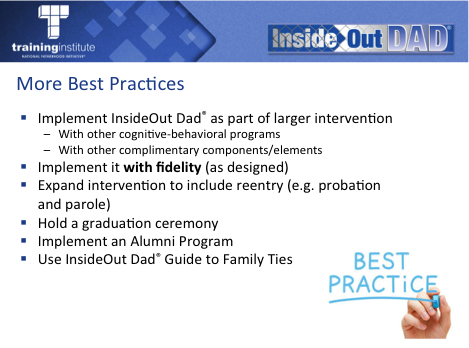 That’s because helping inmates to become better dads is only one aspect of success in reentry.

One of these components is “Mentoring and Community Support.” Incarcerated and formerly incarcerated dads need to create positive connections to family, friends, and others in their community. Those connections create an environment of support that guards against recidivism. The experience of Taos Men (Taos, New Mexico) illustrates the power of mentoring in reentry:

The mission of Taos MEN (Men Engaged in Nonviolence, Inc.) is to inspire, train, and empower men and boys to lead lives of nonviolence. They have found that a key ingredient in working with dads in recovery is helping them practice fathering by getting involved as a mentor. Some of the best mentors are dads who have struggled or encountered roadblocks (legal or otherwise) in connecting with their children. Taos MEN encourages these dads to serve as mentors to dads with similar struggles. Acting as a mentor had the added benefit of helping these mentors continue to regain the confidence and relational skills they need to be there for their children. 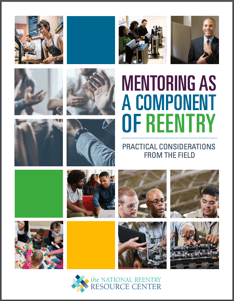 The importance of mentoring in reentry is why I was so pleased to learn recently about a new free guide from the National Reentry Resource Center (NRRC) called Mentoring as a Component of Reentry: Practical Considerations from the Field. (The Council on State Government’s Justice Center runs the NRRC. The Justice Center and NFI have partnered through the years to help organizations create successful reentry programs.) The guide focuses on these five considerations:

It includes examples of some fatherhood programs that have integrated mentoring into their range of reentry services.

If you have a reentry effort, or plan to start one, I recommend you download this free guide to enhance that effort.

Does your organization have or want to help incarcerated and formerly incarcerated dads successfully reenter the lives of their family and community?

If so, have you considered implementing a mentoring component?