Posted by Christopher A. Brown November 29, 2022
How to Advance Equity for Fathers in Human Services
If you’re a regular reader of this blog, you know that there’s a lack of equity in human services. Our nation’s human... END_OF_DOCUMENT_TOKEN_TO_BE_REPLACED
Posted by Erik Vecere November 22, 2022
Learn How A Crucial Partnership Will Open The Door to Reducing Child Abuse and Neglect
Posted by National Fatherhood Initiative November 15, 2022
Equipping Fathers and Organizations to Be More Father-Inclusive with Christopher Brown

How You Can Help Dads Address the Maternal Mortality Crisis 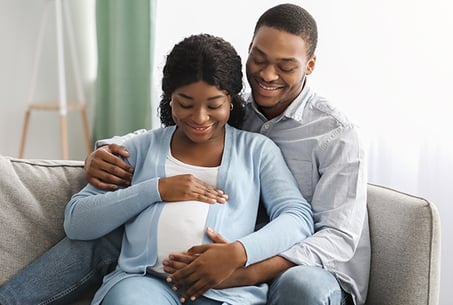 Do you know about America’s maternal mortality crisis?

If you’re like me, you might be aware of it but perhaps not as informed as you should be.

Recently I learned about Bruce McIntyre and Omari Maynard, two dads working to end the maternal mortality crisis, particularly among Black women, after their partners died in or shortly after childbirth. I learned about them during this interview by Robin Roberts of Good Morning America (GMA). Their stories are also featured in Aftershock, a documentary on Hulu that examines the maternal mortality crisis among Black women in the U.S.

The U.S. occupies a dismal place among developed countries when it comes to maternal mortality. In fact, we rank last among 55 similarly wealthy countries with 17.4 deaths per 100,000 live births. The situation for Black women is particularly dire. According to this brief from The Commonwealth Fund, the maternal death ratio for Black women (37.1 per 100,000 pregnancies) is two and one-half times the ratio for white women (14.7) and three times the ratio for Hispanic women (11.8).

This is an important issue for fatherhood practitioners to address. Why? Because it leaves the children of women who die in or shortly after childbirth without a mother and dads without a partner to help raise their children.

So, what’s a fatherhood practitioner to do?

First, educate yourself about this crisis. You’re already on your way having read this post. I encourage you to watch the GMA interview and the Hulu documentary.

For more education about this crisis and ideas on how dads and moms can reduce the risk of maternal mortality, check out the "Hear Her" campaign of the Centers for Disease Control and Prevention. The campaign includes tools to help you educate the dads and moms you serve.

Were you aware of how poorly the U.S. ranks in maternal mortality?

Are you doing anything to educate expectant dads about how they can reduce this risk in their partners?

*Dads’ involvement during pregnancy, such as attending prenatal visits, also lowers the risk of poor birth outcomes for their children, such as pre-term birth and low birth weight.