Posted by Christopher A. Brown June 28, 2022
Teach Dads These 3 Qualities of Successful Fathering
“Habits may be the smallest units of transformation, but they’re also the most fundamental. They are the first... END_OF_DOCUMENT_TOKEN_TO_BE_REPLACED
Posted by Ave Mulhern June 22, 2022
24/7 Dad® - Worth the Wait
Posted by National Fatherhood Initiative June 16, 2022
[Father’s Day Special] The CHI Podcast featuring NFI President Christopher A. Brown: Why Dads Matter

How an Exciting Public Library + Nonprofit Partnership Delivers Fathering in 15™ 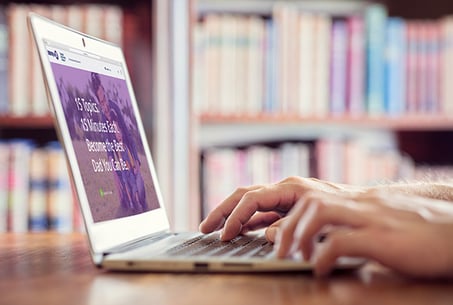 The ubiquity and purpose of public libraries.

The modern public library in the U.S. emerged in the mid-1800s. With funding from the wealth of Andrew Carnegie—the third richest person in the history of the world—public libraries expanded across the country in the late 1800s and early 1900s to well over 3,000.

Today, there are more than 9,000 public libraries in the U.S. The main purpose of a public library is to “provide resources and services in a variety of media to meet the needs of individuals and groups for education, information and personal development.” Public libraries have evolved in recent decades to serve that purpose and remain relevant. They’ve become a community hub by establishing partnerships with direct-service providers to connect citizens to programs and services they need or want.

Those programs and services are sometimes delivered by direct-service providers within the walls of a public library. Such is the case with The Parenting Training Network (PTN). This small nonprofit in the Bronx, New York has partnered with the Tremont Library to deliver Fathering in 15™, the online fatherhood program of National Fatherhood Initiative® that’s used by organizations in 40 states and Washington, D.C.

A few months ago, I had the pleasure to interview founder and CEO Cynthia Shields. I was struck by her passion to help parents, especially dads. We spoke about why they chose to offer their programs—they call them “workshops”—out of a library, how they frame the messaging around what Fathering in 15™ provides, and the dads they serve with it.

Benefits of Using a Public Library

Cynthia shared that because the staff size of PTN is small, she runs the organization part-time, and PTN generates revenue with a fee-for-service model rather than through individual donations or foundation grants, it made sense to create a cost-effective service-delivery model. Cynthia chose the Tremont Library to eliminate the cost of a building, its central location on the Bronx, and because parents see it as a trusted, safe place. Moreover, Cynthia had experience using a public library to serve clients. Before starting PTN, Cynthia worked for an agency that served women. She brought them to a library to conduct research on programs and services that could meet their needs.

Framing the messaging around a fatherhood program is critical to effective recruitment of dads. In addition to calling Fathering in 15™ a workshop—a word that many dads find more attractive than, for example, a “program”—PTN says that it takes only three sessions to complete it. Rather than inundating the dads with all of the content the workshop covers, they tease dads some of the content to make them curious. They tell dads that during the workshop they’ll learn, for example:

When the dads arrive to start the workshop, only then does PTN staff give them an overview of everything they’ll learn.

One of the main barriers to recruitment of dads into a fatherhood program is when dads think it involves too much of a time commitment. In addition to sharing content that makes it relevant for many dads’ needs, this framing makes the workshop seem doable, manageable.

PTN holds the sessions for all their parenting workshops on Saturdays between 10:00 am and 3:00 pm. That’s why they can cover all 15 topics in Fathering in 15™ in only one day. (It takes as little as 15 minutes to complete each topic.) They charge dads a nominal fee of $10 to complete it. (Cynthia remarked that dads don’t balk at the price.)

After dads arrive, PTN staff assigns them a library computer at which to sit and use to go through Fathering in 15™. Staff gives them an overview of it that includes the content, how to navigate it, and how to launch it. Next, staff instruct and show dads how and when to complete and email to staff the pre- and post-surveys that are part of Fathering in 15™.

After a dad finishes, PTN staff quickly compare the pre- and post-survey results and use them as a teaching tool. Specifically, when staff sees that a dad didn’t answer a question correctly, they go over the associated content with him (e.g. take the dad back to the part of the program that covers that content) to ensure he learns it.

After finding success with using Fathering in 15™, PTN re-subscribed to it earlier this year. To make it even more convenient for dads, they now allow for completion of Fathering in 15™ by a dad at his pace and wherever convenient, such as in his home using a computer, tablet, or smartphone. When a dad enrolls for self-paced completion, PTN staff meet with him at the library before he begins to orient him to Fathering in 15™. They also meet with him at the library after he finishes and emails the post-survey to go over the results and provide, if necessary, extra coaching on the content. Cynthia said that offering this self-paced option has increased the number of dads they serve, especially dads who work on weekends and noncustodial dads who can only spend time with their children on the weekends and don’t want to sacrifice that time to complete a workshop.

PTN’s next expansion of Fathering in 15™ will include serving Spanish-speaking dads, now that NFI offers a version of it in Spanish.

Dads Served with Fathering in 15™

That final step—to ensure that dads learn all of the content—is critical because of the dads PTN serves with Fathering in 15™.

PTN serves dads who are mandated by family and criminal courts and a number of direct-service providers (e.g. those that provide foster care and child abuse prevention services) to complete it.* These entities require proof of completion. PTN uses the Certificate of Completion that’s part of Fathering in 15™ as that proof. Cynthia shared that these partners like that PTN staff are present to ensure dads complete Fathering in 15™ and receive, if necessary, extra coaching.

Cynthia noted that these mandated dads are quite diverse in race, ethnicity, income, and custodial status. They include African-American, Hispanic, and White dads, and dads who are African immigrants. Most of the dads work and are low- to lower-middle income. Some dads are also middle- and high-income. Dads mandated to complete Fathering in 15™ come from all walks of life. After all, she said, child neglect and abuse know no bounds.

To learn more about Fathering in 15™ and to watch a short demo, click here. We also encourage you to enter “Fathering in 15” into the search field of The Father Factor blog to read posts about other organizations that have found success with the program.

Have you thought about partnering with your public library to serve dads?

What programs and services of your public library could create a natural partnership for your father-serving effort?

* Cynthia shared that the inclusion of content from NFI’s evidence-based and evidence-informed programs and other resources in Fathering in 15™ encouraged the courts and community-based organizations to mandate that dads complete it.