Posted by Christopher A. Brown January 31, 2023
The Value in Customizing a Fatherhood Program
There’s a lot of emphasis these days on implementing fatherhood programs with fidelity. Indeed, many funders of... END_OF_DOCUMENT_TOKEN_TO_BE_REPLACED
Posted by Ave Mulhern January 24, 2023
A Few of My Favorite Things… and they are FREE!
Posted by Christopher A. Brown January 17, 2023
How Father Involvement and Bi-Strategic Parenting Positively Affect Children’s Brain Development

How Can I Keep My Teen Safe with Their New Smartphone?

If you're a dad or serve dads of teens, they already have a smartphone of their own or have been asking for many months, hoping to join the digital, always connected generation with their own iPhone or Android phone. Kudos to them, but not so fast, because while children eagerly insist that they’re ready for adult responsibilities, they really aren’t, cognitively or emotionally, and that includes the serious responsibility of having a tiny computer in their pocket. 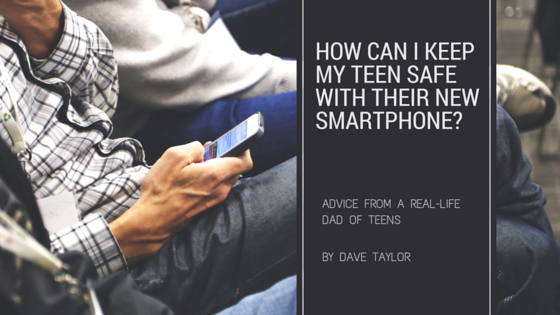 Let's be candid: the Internet is a quite terrifying place in spots and there are quite legitimate risks that they'll face on a daily basis. For boys, it includes being exposed to — or actively seeking out — hardcore pornography that could truly scar him and affect his perception of healthy intimate relationships (there’s some harrowing research just coming out on this subject). There are also hate groups and even terrorist organizations who are learning to master the “grooming” process through online chat groups and social media.

For girls, there's the challenge of a healthy self-image which can be destroyed by the cruel candor of the online world. No girl is skinny enough for the masses and other children (and adults) aren't shy about sharing their opinions in a blunt, vocal fashion. When she posts her first selfie and is told she's ugly, fat and stupid looking, it can permanently scar, a particular form of cyberbullying that's way too common with girls as each tries to find their own identity and come to terms with their physical appearance, both what they can change and what they cannot.

Cyberbullying really is at epidemic level in the modern digital world of the adolescent. This can manifest as your child being the victim of a non-stop stream of hostile, belittling, taunting and vitriol, of course, but it can also come out as your child seeking to be accepted by the “cool kids” and joining in on the harassment and bullying of another child. And this isn't just the hostile teens who act out in this fashion either, because I can hear you saying "not my little angel".

Okay, so that’s some of the down side of them going online with a smartphone. The upside is that mobile phones offer access and safety, whether it’s your child being able to check in with you after school so you know where they are at any point of the day or them being able to call you to say they want to come home from a party that’s starting to get out of hand. I've had my teens do just that more than once, one time with my daughter not even knowing exactly where she was in town and us having to use a mapping program to figure it out. We were both thankful she could reach out and I could come get her.

Smartphones are also really fun. There are a remarkable number of engaging, stimulating and entertaining games available on modern phones, whether your teen wants an iPhone or Android phone. Not enough diversion? There's email. Snapchat. Instagram. Tumblr. Texting. YouTube. Netflix. Social Media. The number of ways that people can connect through smart devices is quite astonishing nowadays, with more social networks and options appearing every week.

Which is, again, one of the dangers. Children really aren't the best at managing their time and moderating influences so that they have a healthy balance of tech and non-tech time in their lives. Homework suffers. Relationships suffer. They become withdrawn and sneaky. Happens again and again, even with the most enlightened and loving families. Girls and boys.

So if you really are going to travel down this path, I suggest that you come up with a behavioral contract before any purchase is made, one that emphasizes that the smartphone is a privilege granted by you parents and that it continues to be available based on your child's ability to use it responsibly and meet the terms of the contract.

I would also suggest having a set amount of time the phone is available each day, that it is powered down each night at a rational time (perhaps 8pm or so, at least an hour before bedtime so its use doesn’t interrupt healthy sleep cycles), and that parents are always aware of any and all passwords set for the phone and individual applications. And occasionally, sit down and go through their phone book with them, text messages and friend lists on social media. Who are these people and why is your child letting them into his or her life? A healthy dose of skepticism is a smart lesson in this digital era.

It really is a tricky world out there. For adolescents and technology, there’s a lot of dangerous territory and it’s up to us parents to be smart and look out for their best interests, not just hand them the device and assume it’s all going to work out for the best. Let them slowly earn their digital freedom, but in measured steps and with you helping ensure their safety along the way...good luck and be careful!

What's one piece of advice you've found helpful when it comes to smartphones and teens?

Dave Taylor has two teen children, an 18yo daughter and 15yo son who both have smartphones. Oh, and an 11yo who is clamoring for a smartphone of her own. You can read about his adventures as a single father on his popular GoFatherhood.com site or find him on Twitter as @DaveTaylor.