Posted by Erik Vecere November 22, 2022
Learn How A Crucial Partnership Will Open The Door to Reducing Child Abuse and Neglect
Imagine my excitement when I received word that an organization called SCAN (Stop Child Abuse and Neglect) wanted to... END_OF_DOCUMENT_TOKEN_TO_BE_REPLACED
Posted by National Fatherhood Initiative November 15, 2022
Equipping Fathers and Organizations to Be More Father-Inclusive with Christopher Brown
Posted by Melissa Byers November 9, 2022
Trauma-Informed Care for Fathers and Families [Training + Free Resource]

How to Build Trust and Rapport with Dads 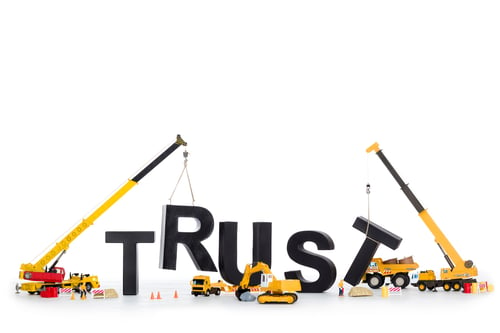 I recently had the pleasure of interviewing Antione Harvis of Dad’s League, a fatherhood program in Opelika, Alabama. Dad’s League partners with the Family Resource Center in Opelika and surrounding communities to serve dads.

When I asked Antione what is the primary job he has to accomplish with dads, he said that it’s to establish trust and rapport. He says that establishing a connection of trust first and then establishing rapport as the foundation of a good relationship with dads is critical to getting them to commit to attend locker room sessions.

Building a relationship with dads before inviting them to attend the locker room sessions is an unusual approach. Most fatherhood programs seek to recruit dads into a program and then build a relationship as the program progresses. While both approaches can be effective, Dad’s League has found success with their approach and in particular with the non-custodial dads they serve.

Dad’s League uses another NFI resource to show non-custodial dads, who are ordered by the courts to attend a fatherhood program, how valuable working with Dad’s League can be—the FatherTopics™ Collection for Non-Custodial Dads. Dad’s league uses this five-session collection to provide these dads with help on:

By providing help in these areas, Dad’s League meets these dads’ critical areas of need. These dads then have, as Antione says, new knowledge “under their belt” when they return to court. As a consequence, they see the value in continuing to work with Dad’s League on a voluntary basis and enroll in the locker room sessions.

When it comes to other dads in the community, Dad’s League employs creative ways to build trust and rapport and a strong referral network to secure a long-term commitment to attend locker room sessions. Antione shared these two tactics, the latter of which also shows the importance of meeting dads’ critical areas of need:

“We partner with organizations that can connect us with dads. In Auburn, for example, we partnered with a ministry called Our House that works with the local housing authority that does, among other things, tutoring of kids. We connected with them to reach out to the dads of the kids by doing a Super Bowl party to get some of the dads to come out. That's where we connected. It was an opportunity to meet and hang out with them in an easy environment. That opened them to committing to a long-term program.

In lot of cases, we have fathers who are short sighted because of crises they face. Being connected with the Family Resource Center helps us connect the dads to resources that meet their needs. We’re fortunate in that our community has a lot of assets, such as a community college that offers free GED classes and workforce training. We also have a resource that helps dads with utility payments. So when we first contact a dad and these issues come up, we connect them to those resources to ‘put the fire out,’ which then opens them to committing to locker room sessions.”

The job of building trust and rapport is a never-ending one. It starts with the little things, such as:

And includes always having a perspective with aspects that aren’t always easy to maintain, such as:

The importance of building trust and rapport is why NFI included the tips above and others in the affordable, online, on-demand Effective Facilitation Certificate™ training. This popular training—completed by facilitators in more than 60 organizations across the country—will make you an even better facilitator of any fatherhood program. Click here to learn more and to register.

In what ways do you build trust and rapport with dads?

Do those ways include meeting dads’ critical areas of need?