Posted by Ave Mulhern January 24, 2023
A Few of My Favorite Things… and they are FREE!
You may know that National Fatherhood Initiative® (NFI) is the nation's leading provider of fatherhood research,... END_OF_DOCUMENT_TOKEN_TO_BE_REPLACED
Posted by Christopher A. Brown January 17, 2023
How Father Involvement and Bi-Strategic Parenting Positively Affect Children’s Brain Development
Posted by Erik Vecere January 10, 2023
One-On-One Delivery of NFI Programs – So Simple, So Effective!

How to Leverage a Deadly Sin to Help Dads 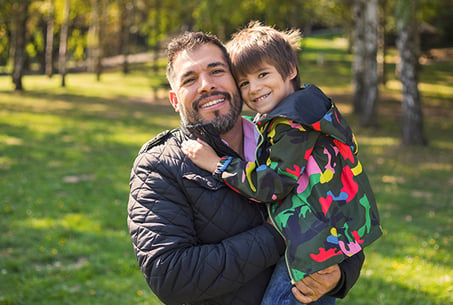 Can you name the seven deadly sins?

Go ahead. Grab a piece of paper and, before you continue to read this post, write them down.

Did you list “pride” as one of them? If you didn’t, that was a huge miss. It is, after all, the sin from which all others arise.

Seriously, though. Is pride really sinful? To answer that question, let’s unpack the meaning of pride.

There are two kinds of pride or, if you prefer, sinful and virtuous kinds. On the one hand, to have pride means that a person is full of themselves, prideful. They overestimate themselves—their awareness, knowledge, skills, and accomplishments. They’re filled with hubris. They’re likely boastful. This kind of pride often masks low self-worth.

On the other hand, to have pride means that a person is content with themselves. They don’t overestimate themselves. They’re humble. Their pride arises from praise by others. While they recognize and cherish the awareness, knowledge, and skills they’ve acquired, as well as, their accomplishments, they realize they still have a lot to learn. This kind of pride often reflects high self-worth.

Creating experiences in which dads feel this latter kind of pride is how you can leverage pride in your work with dads. These experiences are another kind of “defining moment.”

This post is the latest in a series of posts about defining moments as described in the book Power of Moments by the brothers Chip and Dan Heath. The primary focus of the book is on how to create meaningful, memorable experiences in the lives of individuals—others’ and even your own. The Heath’s research points to four ways—what I like to call “levers”—to create defining moments:

Moments of pride, in the words of the Heaths:

“…capture us at our best—showing courage, earning recognition, conquering challenges.”

You can create these moments for dads by employing any or all of the following three tactics:

This is the easiest of the three tactics to employ. Simply recognize dads’ accomplishments as they become better dads. One of the most common ways fatherhood programs employ this tactic, for example, is to hold a graduation ceremony for dads who complete a program. Dads might receive praise from staff, community leaders, and their own families for this accomplishment. I highlighted this graduation ceremony in my post about elevation. One of the great things about a single defining moment is that it can leverage one, two, three, or all four levers—they’re not mutually exclusive but reinforcing.

You can also recognize dads at the start of a program by holding, for example, an event for the entire family that praises dads for their commitment to become a better dad. This is an increasingly common way that fatherhood programs employ this tactic.

You don’t need to limit recognition to the start or end of a program. Indeed, you shouldn’t limit use of this tactic in those ways. You should recognize dads’ accomplishments along their journey through the program. And that leads me to the second tactic.

To leverage this tactic, start by identifying the clear and potential markers of dads’ success—the milestones—along the path to completing their work with you. To identify them, the Heaths recommend you ask questions like:

Depending on the work you do with dads, there might be just a few or a lot of them. If you run a group-based fatherhood program, for example, milestones could include coming to the second session, completing one-half of the program, and completing the entire program. If you provide one-on-one case management that involves helping dads obtain a job, milestones might include completing a resume, securing a first job interview, and securing a job.

After you identify your milestones, pick enough of them so that they have a multiplying effect. They should create enough “small wins” so that each milestone builds on the one before it in a way that deepens the sense of accomplishment. Dads should be able to hit the milestones frequently enough to keep them motivated to continue on their journey with you.

And that—increased motivation—is the key to the effectiveness of this tactic. One way the Heaths recommend thinking about multiplying milestones so that they increase motivation, and increase excitement about hitting the next one, is to “level up.” This approach involves increasing the effort it takes to hit the next milestone. The Heaths use the example of learning to speak Spanish:

If you help dads to read more often with their children, for example, you could level up milestones as follows:

You need to ensure, of course, that there aren’t any barriers beyond dads’ control that will affect the milestones you use (e.g. limited access to their children), but in multiplying milestones, you can, the Heaths say:

“…transform a long amorphous race into one with many intermediate ‘finish lines.” As [dads] push through each one, [they] experience a burst of pride as well as a jolt of energy to charge toward the next one.”

Have you ever stood up for someone when no one else did? Have you ever risked your safety—perhaps even your life—to prevent someone harm? If you have, then you've exhibited courage and experienced the accompanying swell in pride. Even if you haven’t, you can certainly imagine the swell in pride you’d have experienced.

This final tactic is the most challenging of the three to employ, but it can be powerful one. That’s because of the depths of pride created when someone practices courage. The Heaths note that the difficulty in creating moments of courage is that those moments often come unexpectedly. You can’t manufacture them. But you can practice them so that when they arrive, you’ll be ready.

This practice is the foundation of “exposure therapy” for people who fear something that they shouldn't fear or fear to the degree that they do, such as snakes, heights, and crossing the street alone. The goal of this form of therapy is to help people manage their fear so that it’s not debilitating and can even be eliminated. Therapists use a level up approach to expose patients to what they fear. As patients hit each level—each milestone—their fear is reduced.

One of the techniques that exposure therapy relies on, depending on the fear, is role-play. That’s because therapists not only want their patients to manage their fear. They also want them to learn how to act in the moment.

In using the fatherhood programs of National Fatherhood Initiative®, one of the fears that facilitators help dads who have poor relationships with the mothers of their children to manage is encounters with the mothers. (Despite what some of these dads might say, some do indeed fear these interactions.) To help these dads learn how to act in those encounters—those moments—facilitators use role-plays that help dads learn how to communicate effectively with mothers in a calm manner and to know when to step away, if necessary, and come back at a later time to resolve an issue between them.

To employ this tactic, identify what the dads you work with fear. Then identify ways that you can help them practice courage to face those fears. One of the ways in which I’ve seen fatherhood programs employ this tactic is to help dads navigate systems that many dads fear, such as the court and child welfare systems. Programs use techniques, including role-plays, to increase dads’ knowledge about how to navigate those systems successfully and how to act appropriately and effectively when they’re immersed in those systems (e.g. court hearings and home visits with child welfare/protection staff).

I’m confident that you can create moments of pride for the dads you serve! Look for my final post on how to use defining moments in your work with dads.

How do you use moments of pride in your work with dads?

Do you use any of the three tactics in this post—recognize dads’ accomplishments, multiply dads’ milestones, or create moments in which dads can practice courage?