Posted by Christopher A. Brown August 9, 2022
Have Americans’ Attitudes About Stay-at-Home Dads Truly Changed?
What’s your attitude toward stay-at-home dads? Do you view them positively or negatively? No matter your attitude,... END_OF_DOCUMENT_TOKEN_TO_BE_REPLACED
Posted by National Fatherhood Initiative August 2, 2022
Parenting Styles – Which One is Best?
Posted by Melissa Byers July 26, 2022
New Data Finds the “Success Sequence” Effective Across Every Demographic

How to Raise a Resilient Child

The discussion today around parenting often centers on "helicopter parents," those parents who hover over every aspect of their children's lives to such an extent that they organize and monitor every minute of their children's lives. As a result, their children have little or no space to explore the world on their own and learn how to effectively navigate life's challenges from one of life's great teachers -- learning from failure. 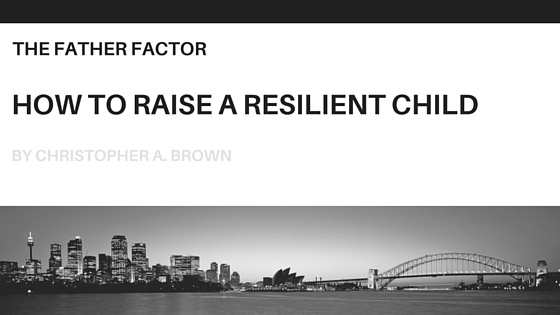 The fact is that no matter how closely parents try to manage their children's lives they can't possibly protect them from life's trials and tribulations. Indeed, parents shouldn't protect their children from those things. Parents should guide their children instead in how to effectively manage the challenges they'll face on their own. Even then children need the resilience to bounce back from those challenges because, inevitably, they will fail. They will make mistakes. They will get knocked down and, in some cases, knocked out. Although counterintuitive, the sooner parents live with and embrace that their children will fail, the more effective parents become.

One of the greatest gifts parents can bestow on their children is to build their children's resilience. The authors of Stronger: Develop the Resilience You Need to Succeed, one of them a former Navy SEAL, identify five factors that help people become more resilient. Although written as a self-help book for adults, parents can use this knowledge to focus the coaching of their children on building those factors. (After all, a good parent is a good coach.)

Here are five factors that resilient people possess and parents should build in their children:

I would also add a sixth factor: resilient people lack a victim mentality. There are legitimate situations in which people are victims, a perfect example of which is the recent murders of more than 125 people in France from multiple, coordinated acts of terrorism. But a victim mentality is a state of mind, a trait that someone acquires and leads to blaming external factors (e.g. people) for failures even when no clear evidence exists that external factors played a role. The lack of a victim mentality doesn't mean that someone is never a victim. It means resilient people don't seek to blame someone or something else or for their failures -- even when someone or something else might have contributed to a failure. They accept responsibility for their part and the lack of control they have over external contributing factors. They get up and move on.