Posted by Christopher A. Brown January 31, 2023
The Value in Customizing a Fatherhood Program
There’s a lot of emphasis these days on implementing fatherhood programs with fidelity. Indeed, many funders of... END_OF_DOCUMENT_TOKEN_TO_BE_REPLACED
Posted by Ave Mulhern January 24, 2023
A Few of My Favorite Things… and they are FREE!
Posted by Christopher A. Brown January 17, 2023
How Father Involvement and Bi-Strategic Parenting Positively Affect Children’s Brain Development

The Real and Raw Impact of Out of the Ashes

National Fatherhood Initiative's recently released Out of the Ashes: Where a Seed Finds Life DVD and Discussion Guide is having a big impact across the nation.

I recently interviewed several staff in organizations that use Out of the Ashes with diverse groups of dads who are currently or formerly incarcerated. Every person I spoke with said the film resonates with dads at a deep emotional level regardless of dads' race or ethnicity. They also said it's an excellent compliment to NFI and other fatherhood programs because it enhances their impact.

Here is how three organizations use this outstanding resource. 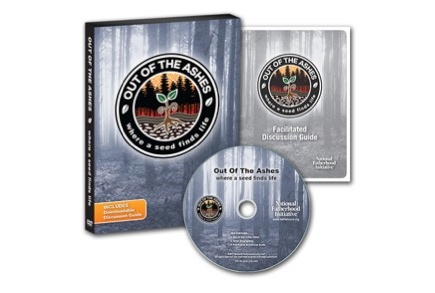 Timmy Smith, Coordinator of the Fathers Matter Program, reports that he uses Out of the Ashes with two groups of dads. One group includes dads reentering Muskegon County after their release from the county jail. (Some of these dads transitioned from state prison to the county jail before their release.) Timmy says that the film reminds them of the relationships they didn't have with their children. It showed these dads some of the things that might transpire as they reunite with their children.

The other group, which Timmy refers to as the "community group," includes dads referred to Fathers Matter by staff of the Wisconsin Department of Human Services, including staff of Child Protective Services. It is with this second group of dads that Timmy uses Out of the Ashes to compliment a fatherhood program. He's found that many of the dads in the community group were once incarcerated, so it's had a meaningful impact on them. For the dads who haven't been incarcerated, Timmy says he hopes it serves as a deterrent by giving them a preview of what would likely happen to the relationship with their children should they go down the wrong path.

He says that even though the film focuses on two African-Americans it resonates with dads of all races and ethnicities because they experience the same family dynamics caused by incarceration. One of the most powerful messages it sends to any incarcerated or formerly incarcerated father, for example, is that the choices and decisions a man makes early in life will impact him and his children for years to come and might, in fact, impact his children for their entire life.

Abdur-Rahim Ali, Imam of the Northeast Denver Islamic Center, also uses Out of the Ashes with currently and formerly incarcerated dads. Imam Ali uses it to compliment NFI's evidence-based InsideOut Dad® program that he facilitates with dads in the Jefferson County Jail. He also uses it with dads who have already reentered the community after their release from prison. He said that you can hear a pin drop when the dads watch the film. It makes dads think deeply because they can see themselves in the film. It makes them think about the broad impact of being incarcerated (e.g. on their children) and that dads should take their life seriously. It sends a message that dads must set an example for their children and grandchildren by exhibiting healthy behavior.

He also reports that the film resonates with dads of all races and ethnicities. And that's vital for Imam Ali because most of the fathers he works with are White or Hispanic.

Steve Longenecker, Director of Programs for Sav-a-Life Pregnancy Resource Center, also uses Out of the Ashes with two groups of dads. In this case, however, both groups include formerly incarcerated dads. One of the groups includes dads who live in a halfway house having just been released from prison. The dads in the other group returned to the community some time ago and participate in a program the center calls "Converge Dads." Steve says the film starts a conversation about reconciliation and, specifically, the realities around dads reconciling with their children. He and the other staff who use the film like that it doesn't look at the dynamics around reconciliation through rose-colored glasses. As he says, it's "real and raw."

If you've thought about using Out of the Ashes but haven't yet made the decision to acquire it, rest assured that it will help your organization or program have an even greater positive impact on currently and formerly incarcerated dads, their children, and their families. Don't hesitate to use this real and raw resource!

Do you work with dads in prison or who have been released from prison?

Could your work with incarcerated or formerly incarcerated dads use a boost from a powerful film that includes a tool to generate meaningful discussion about the impact of incarceration on dads, their children, and their families?