Posted by Christopher A. Brown January 31, 2023
The Value in Customizing a Fatherhood Program
There’s a lot of emphasis these days on implementing fatherhood programs with fidelity. Indeed, many funders of... END_OF_DOCUMENT_TOKEN_TO_BE_REPLACED
Posted by Ave Mulhern January 24, 2023
A Few of My Favorite Things… and they are FREE!
Posted by Christopher A. Brown January 17, 2023
How Father Involvement and Bi-Strategic Parenting Positively Affect Children’s Brain Development

Stand Out, Look Out, Shout Out: How Baby U Created a Program Dads Can Get Behind 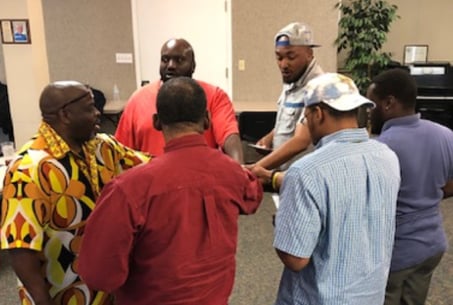 When I think of standouts, one organization comes to mind: Baby University (also known as Baby U), one of 7 funded programs with the Signal Centers of Chattanooga, TN. Funded through a partnership between the City of Chattanooga, Blue Cross Blue Shield of Tennessee, and Signal Centers, Baby U provides intensive case management services to expectant mothers.

Baby U observed that more than 50% of their clients were involved with the dad of their child and they wanted to be intentional at including and working with the fathers specifically. So, Baby U put together a dynamic fatherhood team: Director, Elizabeth Cotellese and Fatherhood Specialist, Brandon Cooper.

Ironically, Brandon’s first day on the job with Baby U was on Father’s Day, 2017 when an event was held with fun family activities including a trip to a minor league baseball game, the Chattanooga Lookouts. The event was called Pops Lookout and included a speaker named Willy Richardson, author of the book, Game Over. Willy spoke about the importance of fathers in the lives of their daughters.

Right from that inspirational start, Brandon, saw his new role as a “Fatherhood Specialist” not as an expert—but as a dad himself—always on the lookout for opportunities to learn and grow as a father, and find ways to better serve Baby U dads.

When Baby U was on the lookout for an opportunity for dads, they saw one with the 24/7 Dad® Expansion Project with National Fatherhood Initiative® (NFI) which would allow them to establish a foundation for their work with fathers. The grant included NFI’s online training course for a Father Engagement Certificate and Effective Facilitation Certificate, a 2-day training institute for NFI’s 24/7 Dad® program, and other NFI resources and technical assistance. They applied for and received the grant in October 2018.

Their first 24/7 Dad® class had 15 dads voluntarily attend. Week by week, the group became more comfortable sharing, and participation increased. A major factor in that success according to Brandon was “the power” in the group process. Once the dads realized they were not alone in their fatherhood walk and struggles, it allowed them to be more engaged and committed to the group. The dads began to consistently look out for each other, and when the group ended, the dads exchanged contact information and are still in touch today!

Specifically, there are two things that Brandon does with consistency to help create a successful group:

When the dads come together the next week, they go over what they did, celebrate successes, and challenge each other. But most of all, they hold each other accountable. They now look out for each other.

Research shows that the use of checklists increases individuals’ ability to ingrain pro-social habits through deliberate practice. In the 3rd edition of NFI’s 24/7 Dad® the My 24/7 Dad® Checklist is a powerful tool that is integrated into each session that helps dads develop the habits of an involved, responsible, and committed father. This checklist encourages dads to identify actions, based on what they learn during each session, that they can take on a periodic basis (i.e. daily, monthly, and one time) to increase their engagement with their children. There is a hard copy, and mobile version (for iPhone or Android) for use during the program and after it ends. This practice, along with face to face meetings, increases the success of the program.

One Baby U dad has a child with his partner, and she also has a child from a previous relationship. He shared with the group that he realized he was treating the 2 children differently, not equally. The group came up with homework for him to do on his checklist: small daily goals to let each child know how much he loved them. The dad saw this as a necessary revelation to himself and he took the steps to change.

Another dad declined a better paying job offer because it was shift work and would conflict with time he could spend with his younger child. He recognized lost time with an older child due to work schedules, and did not want to repeat the same mistake. The group fully supported him in his decision.

Brandon also has the group (and himself included) recite the 24/7 Dad® Pledge at the end of each session. This practice, shouting out this pledge, is an oath to each other and to their family. For a moving illustration of the group practicing the pledge click here or on the video below. 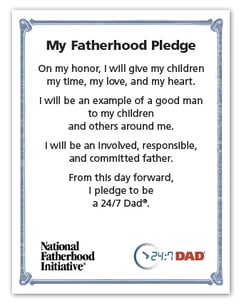 Baby U is currently hosting their sixth 24/7 Dad® class! Elizabeth and Brandon agree that the checklist and the 24/7 Dad® Pledge are impactful components to the success of the program. They’re currently working on a reunion with the dads and the challenge will be for these 24/7 Dads® to become 24/7 Dad® Ambassadors. In fact, Baby U has expanded beyond the center and into a local detention center and Brandon has a vision for working with teens in the high school – before they become fathers.

I will sure be on the look out for what happens next with Baby U!