Posted by Ave Mulhern January 24, 2023
A Few of My Favorite Things… and they are FREE!
You may know that National Fatherhood Initiative® (NFI) is the nation's leading provider of fatherhood research,... END_OF_DOCUMENT_TOKEN_TO_BE_REPLACED
Posted by Christopher A. Brown January 17, 2023
How Father Involvement and Bi-Strategic Parenting Positively Affect Children’s Brain Development
Posted by Erik Vecere January 10, 2023
One-On-One Delivery of NFI Programs – So Simple, So Effective!

These Fathers are Unseen and Unsupported 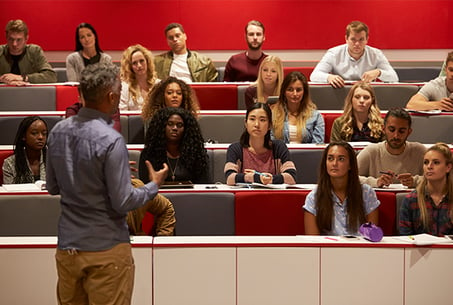 Unless you’ve been hiding under a rock recently, you’re aware of the sea change between men and women entering and graduating college. Consider these facts from the Pew Research Center:

Nearly 6 in 10 enrolled in college are women.

The cost of college explains why so many Americans don’t enroll in or graduate. About 40% say that’s why. That factor and others lead to a majority of all Americans, 6 in 10, who don’t have a four-year college degree.

Still, there are a sizable number of Americans who cite other reasons for not attending college, and that’s where we see an interesting dichotomy between men and women that centers on choice. Nearly 30% of Americans say they just didn’t want to attend college with 34% of men versus 25% of women saying so.

The result? We live in a nation of undereducated men with a host of implications for them and our country.

The good news, for men at least, is a growing sense that college might not be all it’s cracked up to be. New analyses have started to question the value of a college degree leading, for example, to a future in the middle class. The payoff of not going to college could be even greater if this country ever gets its act together and establishes a strong apprenticeship infrastructure as a pathway to economic success for Americans who don’t want to attend or can’t afford college. (But I digress. That’s one of my soapboxes.)

Dads Dropping Out of College

When I think about fatherhood, as I often do, I wonder how men are faring in college who are already dads. After all, parenting in college brings unique challenges to graduating.

Unfortunately, the picture isn’t pretty. We see huge dropout rates among dads enrolled in college, which contributes to fewer men getting college degrees. While mothers make up about 70% of the nearly 4 million parents in college, there are more than 1 million fathers enrolled. There’s a large difference in dropout rates with 61% of dads dropping out compared to 48% of moms.

Fortunately, many campuses have programs that help parents stay in college and graduate. But even when campuses have such efforts, dads are often unseen and unsupported. That’s not a surprise given that our human service culture in America focuses on serving moms and kids, which creates a lack of incentive to support and serve dads.

At least one college has created a program that intentionally and proactively supports and serves dads, the City University of New York’s CUNY Fatherhood Academy. This program works with dads before they enroll in college to ensure they succeed. For dads who didn’t graduate high school, it helps them earn a GED. It provides college and career readiness training, parenting workshops, job preparation, and more.

The Hidden Opportunity for Fatherhood Programs

Herein lies a hidden opportunity. Given the dearth of programs that support student dads, what if well-established fatherhood programs that have colleges and universities in or near their communities were to reach out to student dads and offer at least some support and services? After all, many fatherhood programs provide the same services as the CUNY Fatherhood Academy. Adding their local college or university as a referral partner could lead student dads to the support and services they desperately need to stay enrolled and graduate.

Are you aware of the huge dropout rates among dads enrolled in college?

Does your fatherhood program reach out to dads on campus to offer support and services?