Posted by Christopher A. Brown January 31, 2023
The Value in Customizing a Fatherhood Program
There’s a lot of emphasis these days on implementing fatherhood programs with fidelity. Indeed, many funders of... END_OF_DOCUMENT_TOKEN_TO_BE_REPLACED
Posted by Ave Mulhern January 24, 2023
A Few of My Favorite Things… and they are FREE!
Posted by Christopher A. Brown January 17, 2023
How Father Involvement and Bi-Strategic Parenting Positively Affect Children’s Brain Development

This Dad Energizes Halloween for Kids in Wheelchairs

Some dads are, in a word, awesome! And then there are some dads who take awesome to another level. 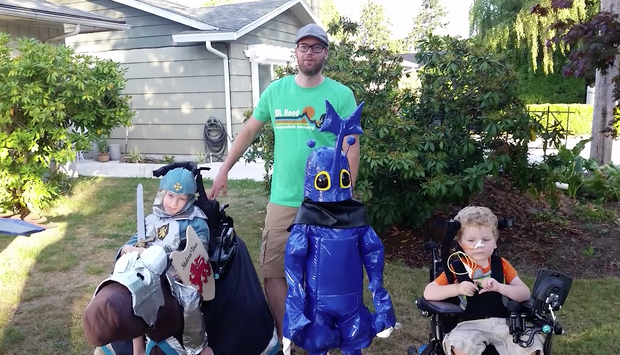 I saw a story on the news the other day about Magic Wheelchair and was blown away. The costumes--which are amazing to behold--incorporate the wheelchairs. A costume surrounds a wheelchair and the child as if the costume had been an integral part of the wheelchair all along. But what really blew me away is how Ryan, with help from his wife Lana, used his considerable design and engineering talent to turn a life-altering event into an opportunity to help children. The life-altering event was the birth of Ryan and Lana's son Keaton who was diagnosed with a rare form of muscular dystrophy called spinal muscular atrophy, or SMA. (Their younger son, Bryce, also has SMA, and they lost a daughter with the condition shortly before she turned 3. Another son died at birth.)

You can read more about the genesis of Magic Wheelchair in this Today.com story, but the long and short of it is Ryan started to experiment with ways to make Halloween special for Keaton. Through trial and error, he learned how to create the costumes. Keaton loved them, and Ryan realized that other children like his son would love them, too. So he launched a Kickstarter campaign to raise money to start Magic Wheelchair. And the rest, as they say, is history--a wonderful history, in this case.

To learn more about Magic Wheelchair, including how to submit a request for a costume or to support the organization, visit their website.