Posted by Christopher A. Brown November 29, 2022
How to Advance Equity for Fathers in Human Services
If you’re a regular reader of this blog, you know that there’s a lack of equity in human services. Our nation’s human... END_OF_DOCUMENT_TOKEN_TO_BE_REPLACED
Posted by Erik Vecere November 22, 2022
Learn How A Crucial Partnership Will Open The Door to Reducing Child Abuse and Neglect
Posted by National Fatherhood Initiative November 15, 2022
Equipping Fathers and Organizations to Be More Father-Inclusive with Christopher Brown

We are Leaving Fathers Out of This Important Discussion 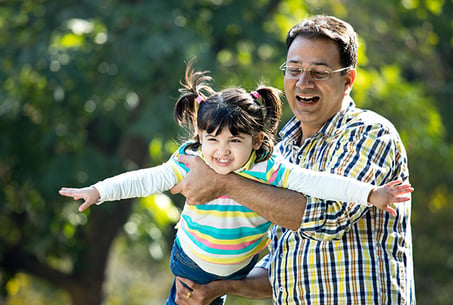 This article is written by Jessica Seinfeld and originally appeared at CNN.com. The article is republished here with permission from the author.

The recently-expanded child tax credit provision in the American Rescue Plan and the proposals in the American Families Plan are helpful and necessary steps to address child poverty, which has grown during the Covid-19 pandemic after years of decline. But to get at the root causes of child poverty, we need to address a key gap in our systems and policies and look at interventions that engage dads and support co-parenting for unmarried mothers and fathers. And I make that assertion from experience.

Twenty years ago, I started Good+ Foundation, aimed at helping kids and families in need, initially in New York, and eventually nationally. At first, we focused on mothers, who overwhelmingly bear the brunt of child care. But as we grew in communities across the country, we learned that to be successful in achieving our mission, we needed to engage and involve fathers. Simply put, where they're included in social programs, policies and legislation, we see better outcomes for kids -- and for mothers.

Researchers have long known that when children grow up in communities without fathers, they tend to face worse outcomes, including in particular much greater incidences of poverty. A 2018 study by researchers from Harvard, Stanford and the US Census showed that children who grow up in communities where fathers are present have higher incomes, lower incarceration rates, and better job opportunities than similarly-situated children in communities with fewer fathers. Family structure matters less than the general level of fatherly engagement. Even if a father is not living with his children, his presence and engagement has a measurably positive effect on child poverty.

Despite this, too often traditional approaches to child poverty not only ignore fathers but even put obstacles in the way of their involvement. In my work through the Good+ Foundation, I constantly hear about fathers who are socially and psychologically isolated. In conversations with social workers who work in family services, I have learned about their distrust of fathers -- stemming from societal myths, historical stereotypes and personal biases they and many of us absorb. As a result, they often believe it is not worth their time to engage with fathers. So often we are also told by social workers that any attention to fathers is misplaced, that time and resources should be focused on single mothers, and that disengaged fathers are "deadbeat dads."

Nothing could be further from the truth. In fact, our fatherhood focus work -- a three-pronged approach that includes providing goods (diapers, strollers, etc), financial grants to programs that intentionally engage fathers (along with mothers) and technical training and support to programs on how to engage fathers -- grew out of engagement with single mothers. It is precisely in order to give single mothers additional support that fathers need to be brought back into the picture. As Joe Jones, president of the Center for Urban Families in Baltimore and a leader in advocating for fathers as a tool for fighting child poverty, has observed, "These dads aren't deadbeat, they're 'dead-broke.'" They are themselves often the victims of incredible intergenerational traumas, including poverty.

Incredibly, we have even seen children go into the foster care system because no one bothered to even engage or locate the child's father.

Policies, too, are often enacted in a way that keeps fathers out. For example, in New York City Public Housing, a mother who accepts financial help from a father risks losing housing eligibility for her and her children. This presents an awkward choice for unmarried parents, leaving mothers to choose between assistance from the government or accepting money from a father who cannot fully cover expenses through his low-wage job.

Reflecting this focus on mothers, the federal government invests billions of dollars annually on thousands of programs across the country aimed at mothers and children and yet, a tiny fraction of that amount is spent on about only 60 funded, fatherhood programs. For example, the federal government spends over $5 billion a year on the federal Women Infant Children Program (WIC), just one of many programs that focuses on mother and child, but spends .2% of this amount on the only federal fatherhood initiative, Responsible Fatherhood.

The solution is straightforward: develop programs and policies that support and include fathers. In my foundation's work, we have identified three key barriers to greater engagement by fathers. First, we need to overcome ingrained and unexamined anti-father biases by training social-service workers about father engagement. Second, we need to reform our child support system. A recent nine-month investigative study in the Baltimore Sun demonstrates how a well-meaning system intended to help children and families can actually do the opposite. Through our partnership with the Aspen Institute's Ascend group and Vicki Turetsky, a former federal child support commissioner, we have determined that reforming child support must start with setting "right-size payment orders" that assess each dad's actual income or employment status more frequently. This, coupled with co-parenting, fatherhood, and employment support, will make it possible for non-custodial fathers to continue to have meaningful engagement in their families and communities. Finally, fathers are not getting the mental health support they need. Many of the fathers enrolled in our programs are struggling with the physical and emotional impact of trauma, which are barriers to effective parenting. We must provide greater support to them.

President Joe Biden's administration has an opportunity to move child poverty policy in a new direction by taking an approach that has proven successful at the local level and bringing it to scale. Biden has personal experience on the centrality of fathers to making strong families and communities. In this moment, where other approaches to fighting child poverty have proven ineffective, the administration could embrace fatherhood and embed support for it in national policy. The President's recent executive order on advancing racial equity offers an opening for a good first step: auditing federal agencies to learn how they are engaging with and including fathers in their family- and child-poverty services.

For a successful model, Biden need look no further than the city of Baltimore, with Jones' Center for Urban Families, which helps non-custodial dads build their fatherhood skills and gives low-income individuals job training and assists with job placement, but many other successful models exist, on both sides of the aisle, including the Ohio Commission on Fatherhood, former New York City Mayor Michael Bloomberg's fatherhood initiatives, or the work of Good+ Foundation.

It's time for new solutions. Successfully addressing poverty is going to require a different approach. With bipartisan support and by embedding fatherhood programming in the administration's child poverty strategy, Biden can score an early, easy, unifying victory and help take decisive action towards ending the scourge of child poverty.

Jessica Seinfeld is an author and Founder of the social services philanthropy Good+ Foundation, a nonprofit that works to dismantle multi-generational poverty by pairing tangible goods with innovative services for low-income fathers, mothers and caregivers. She lives with her family in New York.