Posted by Melissa Byers August 16, 2022
[Free Resources] Share the Success Sequence With Families You Serve
A few weeks ago, I posted a blog that highlighted the most recent findings on how the success sequence is effective for... END_OF_DOCUMENT_TOKEN_TO_BE_REPLACED
Posted by Christopher A. Brown August 9, 2022
Have Americans’ Attitudes About Stay-at-Home Dads Truly Changed?
Posted by National Fatherhood Initiative August 2, 2022
Parenting Styles – Which One is Best?

What Parents Should Really Fear

In my last post in this blog, I asked parents to identify the top three things they most fear and to rate their level of fear for each one. I then described a study of parents that identified the top 10 fears that most parents have for their children and asked parents how their fears mapped to those top fears. 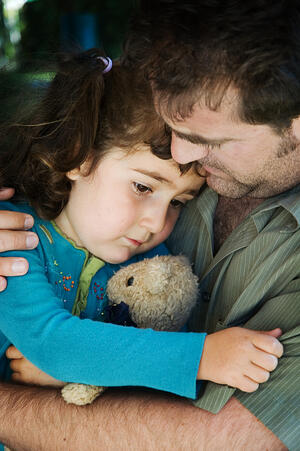 I made the point that many fears of parents are unfounded. I then laid out six steps that help parents determine whether the fears they identified are ones they should be worried about. Central to these steps is taking the time to examine the evidence for the prevalence of poor outcomes for children related to parents' fears. If a parent fears, for example, that his or her child will drown, the parent should locate data on the prevalence of drowning for children of his or her child's age. I pointed parents to several excellent sources for data on children's health that they could use to examine the evidence.

One of these sources for evidence is the non-profit Child Trends. As luck would have it, Natalia Pane, a Child Trends research scientist and statistician, read my post and sent me an email to draw my attention to a book she's written called The Worry Clock: A Parent's Guide to Worrying Smarter about The Real Dangers to Your Child

. I checked it out and realized what a great resource it is for parents. So I asked Natalia whether I could write a follow-up post to draw wider attention to the book, and she gave me her blessing.

I really appreciate when really smart scientists make their research easy to understand using stories, concepts, and analogies. Natalia uses the concept of the Worry Clock to illustrate how much parents should worry about dangers to their children. Specifically, she focuses on the ultimate fear for a parent -- his or her child's death. She uses the Worry Clock to present the data on the leading causes of death for children in different age groups. As a result, there is a Worry Clock for each age group. As Natalia describes it, the Worry Clocks are:

Sixty-minute clocks that present the most common causes of death and their relative importance, based on frequency of death. The idea is that if you are going to worry for one hour, the clock presents the amount of time you might spend on each cause of death, if you were to follow the actual data. For example, if car accidents account for half of all possible ways children die, then the Worry Clock would suggest spending half of the hour -- thirty minutes -- worrying about car accidents.

If you have an infant, for example, you should worry most about suffocation and strangulation (27 minutes). Your next most significant worry should be about homicide (14 minutes). Other causes of death shouldn't worry you much as no other cause represents more than six minutes in the Worry Clock for Infants.

I highly encourage you to read the book. It provides great insights, including:

Perhaps most importantly, Natalia provides practical advice, based on evidence and common sense, for how parents can protect their children from the leading causes of death in each age group. That's another thing I really appreciate -- when scientists help people apply research in practical ways. Bravo, Natalia!