Posted by Erik Vecere November 22, 2022
Learn How A Crucial Partnership Will Open The Door to Reducing Child Abuse and Neglect
Imagine my excitement when I received word that an organization called SCAN (Stop Child Abuse and Neglect) wanted to... END_OF_DOCUMENT_TOKEN_TO_BE_REPLACED
Posted by National Fatherhood Initiative November 15, 2022
Equipping Fathers and Organizations to Be More Father-Inclusive with Christopher Brown
Posted by Melissa Byers November 9, 2022
Trauma-Informed Care for Fathers and Families [Training + Free Resource]

With the focus during this presidential race on Obamacare, immigration reform, terrorism, and the economy, it's not surprising that the leading Republican and Democratic candidates have had little to say about what they would do to support strong families. Moreover, the media haven't been particularly interested in what the candidates would do once elected to build and maintain what is arguably the most important institution in American culture. 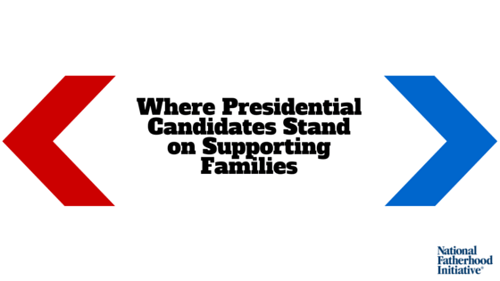 Given my role as president of National Fatherhood Initiative, you might not be surprised that I'm concerned by this lack of attention. I became further concerned as I watched the results roll in during the Iowa caucus. That's because Ted Cruz' win on the Republican side was helped greatly by Iowa Republicans' desire to vote for a candidate who shares their values. There's no doubt that Iowans -- Republicans and Democrats -- have long-shared the value of promoting strong families. The issue -- which was certainly more prominent in the last election cycle -- has been lost on pretty much everyone except, of course, the people who matter most -- voters.

To be fair, I'm convinced that each of the leading candidates believes in the importance of supporting families. But the proof is in the pudding, as they say. And I have no doubt they'd go about supporting families a bit differently. So I decided to conduct a review of the five leading candidates' stands on promoting strong families and, most importantly, how they would help build and maintain strong families if elected. I not only wanted to know for myself where they stand. I wanted to help you and others who care about this issue to be better informed when deciding who will get your vote.

To conduct my review, I went straight to today's political version of the horse's mouth -- the candidates' "for president" websites. While acknowledging that some positions each of the candidates has articulated might indirectly strengthen families -- such as policies to get more Americans working -- I looked for policy positions that directly address strengthening families.

Depending on whether you tend to look at the proverbial glass as half full or half empty, you might be encouraged that three of the leading candidates would seek to implement reforms that would directly strengthen families. On the other hand, you might be discouraged that two of them have chosen not to address this important institution with specific reforms. Either way, I hope this post has given you a little more information to chew on as you decide which candidate to support. And maybe, just maybe, the candidates will have more to say on this issue as the campaign moves on to New Hampshire and beyond.