Posted by National Fatherhood Initiative May 24, 2022
The State of Moms and Dads in America (2022)
This article is written by Mike P. Taylor and was originally published at the Dad Well Done. It is republished here... END_OF_DOCUMENT_TOKEN_TO_BE_REPLACED
Posted by Christopher A. Brown May 17, 2022
Here’s What We Know About the Work of Federal Fatherhood Grantees
Posted by Ave Mulhern May 10, 2022
3 Ways to Keep Fatherhood Program Group Sessions Focused and on Track

Where’s Your Dad? Spokane’s Response to A Community Crisis 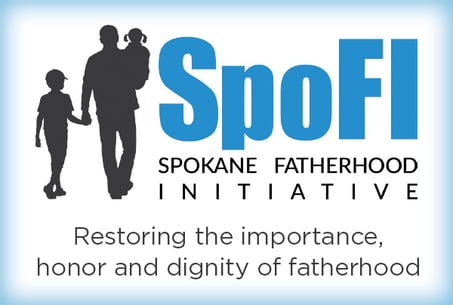 While listening to the police scanner, Spokane County Sheriff Ozzie Knezovich heard the chilling report “a man with a gun” and “shots have been fired.” Sheriff Knezovich immediately jumped into action assisting his deputies in the intense man hunt. Cautiously tracking the suspect through the snow, they finally spotted the suspect crouched behind a tree. Huddled in the snow they found the terrified eyes of what looked like a 10 year old boy (he turned out to be 13) clutching a BB gun staring up at him. At that moment, Sheriff Knezovich stopped being a sheriff and started being a dad.

“Get over here son. Where’s your mom?”

The Need for Fathers

Ron Hauenstein had been volunteering and working to solve community issues and problems for over 10 years. He worked with foster care and adoption agencies and volunteered in a women’s homeless shelter. Over the years, Ron kept seeing the despair in the unending flow of women coming to the mission and the rising rate of children in foster care. The women and children coming from failed relationships, violence, substance abuse, poverty, neglect, and domestic abuse. It was a list of reasons that seemed endless, but the result was always the same, women in desperate situations and neglected children. For Ron, the common denominator to both these issues was fatherlessness. Ron knew he couldn’t solve this problem alone. Although he always prayed for the many women and children affected by fatherlessness, even to feel despair himself, he began to pray for guidance.

But it wasn’t until 2016 that the movement gained real traction.

In January of 2016, Ron attended a City Impact Roundtable meeting organized by the Greater Spokane Evangelical Association. At the community wide forum they discussed ways the church could address and help solve the problems the city was facing. Along with church leaders, they invited representatives from Homeless Shelters, Crisis Pregnancy Centers, local business leaders and elected officials. During a break out session, they asked participants to work in groups to identify one (and only one) issue that was the primary problem facing their community.

Without hesitation or coordination, table after table declared that the number one issue facing Spokane was fatherlessness.

The City Impact Roundtable sparked the formation of a steering committee that crafted the name Spokane Fatherhood Initiative, or SpoFI (pronounced SPOF-eye). SpoFi was founded with three objectives:

Work for SpoFi began straight away. As an organization, they held weekly prayer and meeting sessions, and began Spokane127, a sub-ministry focused on foster care and adoption support services. In July of 2017, SpoFi was officially incorporated and received IRS non-profit status. The next steps were soon to unfold and Ron, a gifted connector of people and resources set out to ignite awareness and move SpoFi into action. But what action?

In September of 2018, with a small donation, SpoFi launched their first 24/7 Dad® program with great interest and success. 13 dads enrolled in the 24/7 Dad® program which is designed for men of all backgrounds, young and old; men that have faced incarceration, men from broken families, who have seen abuse, or had no positive male/father role models, and young men or new fathers that have questions on what it means to be a “good father.” The24/7 Dad® program addresses all 3 of SpoFi’s objectives! The 12 dads that completed the program showed a great thirst for making a difference in their and their children’s lives! One dad says “It’s really made me rethink the whole way that I perceive of being a father and having kids.” To watch some great testimonies from those dads- and to also see SpoFi’s impact on foster care, an incarcerated dad, and even the impact some “Donuts With Dad” had in a school—click here.

A little over a year in existence, SpoFi is committed to recognizing and facing the challenges dads and families face in today’s world. They have recognized that the problems in their community start with the dads in the community and those problems trickle down through to the next generation. The work that The Spokane Fatherhood Initiative is doing continues to evolve and grow. The SpoFi Board of Directors consists of people with experience in drug and alcohol rehab, reentry after prison, homeless shelters and family services, and people, with in-depth knowledge of the issues and stigmas facing fathers from different walks of life.

Just as NFI recommends in our free eBook, How to Mobilize Your City, County, or State Around Responsible Fatherhood leaders gathered from all the community sectors need to move in the same direction for the good of the community even while they continue to pursue their unique directions and priorities. Not content to sit on the sidelines and watch as families are torn apart and face day-to-day challenges due to fatherlessness, SpoFi is touching the lives of these families and inspiring change.

It’s no wonder that in the city where the first Father’s Day was celebrated over 108 years ago that such an impactful fatherhood organization now exists!