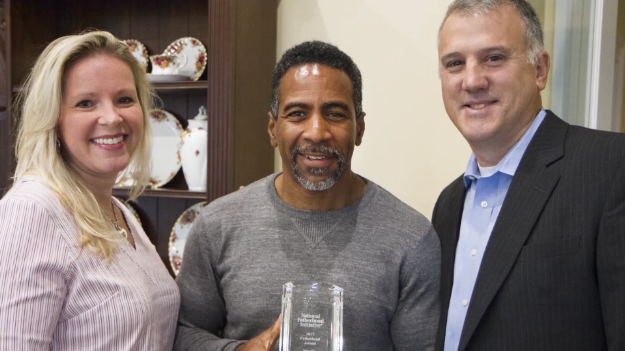 In a presentation very fitting for the man who pioneered the award, Andy Schoka, former NFI Board Chairman (pictured right), and Melissa Steward, NFI Vice President of Marketing (pictured left) gathered at Care Net in Ashburn, VA to present Roland Warren (center) with a 2017 Fatherhood Award, on behalf of National Fatherhood Initiative's Staff and Board of Directors.

NFI's fatherhood award is presented to individuals and organizations whose work goes above and beyond in supporting responsible fatherhood. To this day, Roland carries the torch for increased father involvement for children everywhere.

In the presentation video below, former NFI Board Chairman Andy Schoka shares, "Roland served National Fatherhood Initiative for many years, most recently as Board member, and before that as President."

Andy continued, "From time to time we take a few moments to recognize individuals who have made significant contributions to the organization [and for fatherhood]. On behalf of the NFI Board and Staff, I'm pleased to present to Roland our Fatherhood Award. It's a recognition that very few people have received over the years. [This award is] in recognition of Roland, his contributions to the organization, and his work in advancing the cause of combating father absence, and the impact that it has on children and families in society today."

As you can see at the close of the video, Roland was most certainly surprised and honored.