Posted by Melissa Steward January 19, 2022
Give this One Thing to New Dads to Bring Them in Right from the Start
Oh, the joys of being a new dad. There are all of immediate things parents must learn like feeding, changing, and... END_OF_DOCUMENT_TOKEN_TO_BE_REPLACED
Posted by National Fatherhood Initiative January 11, 2022
How Effective Are Programs Supporting Unmarried, Nonresidential Fathers?
Posted by Ave Mulhern January 4, 2022
Start Where You Are to Change the Ending

25 Years of NFI: A Mirror, A Window, and a Telescope: David Cozart, Lexington Leadership Foundation 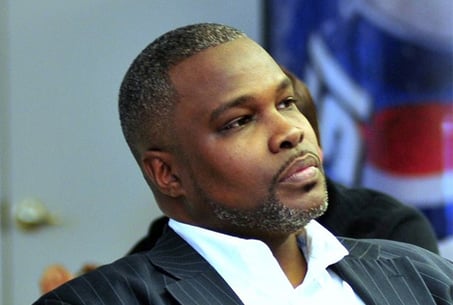 As we continue to celebrate fatherhood champions doing excellent work in honor of NFI’s 25th Anniversary, we turn our focus to David Cozart of Lexington Leadership Foundation located in Lexington, Kentucky.

Lexington Leadership Foundation (LLF) is an umbrella organization serving families through serving children within In-School and After-School programs, Athletics, the AMACHI program, mentoring, summer enhancement and Urban Impact. LLF does this through a 3-prong approach: Engaging people of faith and good will to address issues, building capacity in others, and developing joint initiatives.

I recently met with David to learn about his role with LLF, what brought him into this position, and to hear some of the most inspirational father stories and successes he’s had working with dads. David is one inspirational leader—he was even honored on the Today Show!

Let’s begin with telling me about your current role at Lexington Leadership Foundation.

"My role at LLF as Fatherhood Initiative Director is to enlist our 3-prong method to address fathers in order to restore, equip, and deploy men back into the family and into the community at large. I provide oversight to many volunteers and with 2 staff; an administrator and a Fatherhood Initiative Coordinator, Lee Shephard. Lee delivers curriculum around responsible fatherhood throughout the community. I have been here in this role for 7 years, but have spent a total of 20 years in fatherhood implanting fatherhood into other spaces. I work with the state agencies, officials, and service providers to increase the capacity for fatherhood programming and awareness raising across the Commonwealth of Kentucky, statewide. We are currently drafting a statewide strategic plan for Kentucky Fatherhood."

How did you come to be in your position at LLF?

"Life circumstances are parallel to my vocation. After my undergrad, as a young single man, I became a counselor at Job Corps working with young men. Then, while still single, I came to Lexington as Assistant Director for a home for unwed mothers. During that time, I became a father (out of wedlock) to two sons, with different mothers, who were born in the same year. Although these circumstances were disappointing and less than desirable, my children certainly were not. I was determined to be present and positive in their lives."

"Later down the road I become a Certified Community Organizer while working with grassroots community agencies. I later served at the Lexington Urban League. I took fatherhood to each place I worked. There was a deficiency of male role models, so if you got me - you got fatherhood. Before working at LLF I was on their board, and they applied for, and received a Federal Responsible Fatherhood Grant. It was then that they invited me to oversee the grant and I accepted the role as Director. While we don’t have that particular grant at this time, our fatherhood work continues."

What did your life look like growing up, and did that play a role in the work you do today?

"I always had my father in the home, and we were a blended family. Both my dad and mom were hard working and they were always there. Both are deceased now but I saw how he worked and modeled his faith. We had 6 in the family, 4 were older and 1 younger sibling, all step siblings but we never felt like step children. Our home was a refuge, and in retrospect, I knew kids who grew up without a father in the home, or were disconnected, and they were very attracted to our family. We always threw on some more food at dinner, etc. Those elements of growing up with openness of both father and mother were a big influence on my life." 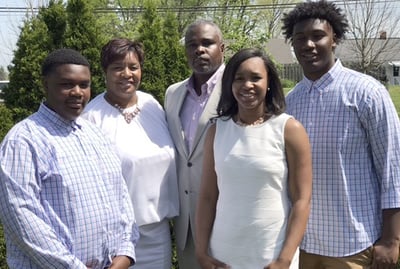 "If you watch the piece about me on the Today Show, you will learn that I had 2 children out of wedlock on May 23 and 26 the same year. My mother and father walked with me through that. I acknowledged that I was going to be a father, and I fared well out of all that. I was both custodial and non-custodial, have been in child support court, dealt with meeting obligations, tension of my marriage and other kids, explaining to my children… you name it! There is no scenario I have not walked through, so it makes for good connections with my cohorts."

What’s the most important thing for fathers to understand when it comes to being involved in their children’s lives?

"It would be for fathers to understand the absolute critical role the father pays in his child’s life in spite of the narrative society gives. NFI is excellent at messaging this. We are intentional at making the dads, cohorts, staff, facilitators, etc., aware of the father absence and involvement statistics. When you share those with the dads, they become aware of the importance of their role. I ask them in the end, ‘If your absence causes all this, then you are one important component when you add up all the stats. But if you flip it, how important are you if you being there reduced those negative stats?’ They see the positive IMPACT of being there and that is encouraging."

I understand that you use NFI’s 24/7 Dad® and Inside Out Dad® programs. What do you like most about them?

"I enjoy making BBQ and a good slab of ribs, starts with good meat. And a good roux is necessary for starting a gumbo. NFI programs are like good, raw meat, and good roux. Strong foundations are what I like most about it. The programs have a clear trajectory and a clear facilitator guide which is a great complement to the program, and it is set up perfectly to coincide with the fathering handbooks."

"I also like the way in which curriculum is laid out.  I’m a firm believer that an internal check should be done first – so the dad looks internally in one of the first few 24/7 Dad® sessions at ‘What is a man?’ It also allows the dads to ask themselves, ‘what’s your story?’. It provokes them introspectively, and then progresses outward.  It is a masterful layout. As a dad, you begin by looking in the mirror (at yourself, your history) then you look out the window (at your relationships). And finally, you look out through a telescope to envision and see what could be."

What’s the most inspirational “father story” you have experienced?

"A dad in the Inside Out Dad® program. Early on, we always gave out the certificates, on nice card stock with nice printing. When this dad completed the program and received his certificate at the graduation, he teared up. I wondered, ‘What’s going on?’ He said ‘This is the first thing I have ever completed’. I may as well have given him a robe, a cap, and a PhD."

"Another man, Andy (in the Today Show video) became like a brother to me. He started with 24/7 Dad® 7 years ago. As a cohort, trying to see his daughter, he did every single thing we offered. He got clean & sober, got a steady job, home, and he now has holidays with his daughter. He is a “resume” fatherhood story."

"I would say to start by getting access to the materials and resources NFI offer on their website. Then begin with collaborations! Start with the things that don’t need major infrastructure and make sure the people you are working with are equipped to understand the importance of responsible fatherhood. At LLF we say, ‘If you’re doing it long, you’re doing it wrong.’"

"There are also lots of 'agents' in the community that are, or could be, doing this work. I make it a practice to always ask, “What about the father?” I challenge everyone on that. CEO’s, Bankers, Human Services, Schools, health care providers… ‘When you’re doing your strategic plans, what about the fathers? When I am looking at the productivity in my factory, what about the fathers?' Challenge practitioners to carry that banner. It is the root cause of dysfunction that routes through our society and impacts every part. If we all see that, we can turn this ship around."