How to Deliver a Fatherhood Program in a Housing Authority 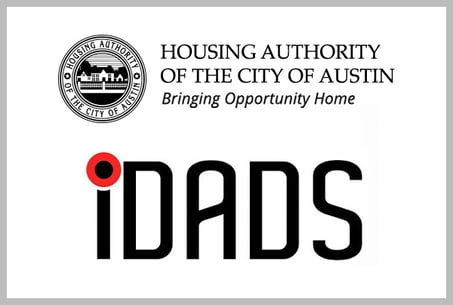 “About 6 years ago, some of our Housing Authority employees noticed that there were a lot of single moms at the properties we manage and that many of them were pregnant. So, they decided to start [a fatherhood] program for dads. The challenge initially in getting dads into the program was the policy that if someone living in an apartment is not on the lease—as was the case with some dads—they can’t stay in the unit. Therefore, dads not on a lease didn’t want to ‘show themselves.’ To overcome that barrier, the Housing Authority decided that if a dad participated in the program and wasn’t on the lease that the Housing Authority wouldn’t consider it a lease violation. The property managers then communicated that to their residents. That helped to recruit dads early on.”

After I heard Joshua speak during the Sixth Annual Texas Fatherhood Summit about the wildly successful fatherhood program he leads for the Housing Authority of the City of Austin (HACA), I realized I had to interview him about running a fatherhood program in this unique setting.

Involved Dads of Action, Developing and Succeeding (I-DADS) strengthens families by serving dads in the 18 properties in the greater Austin, Texas area managed by HACA. Dads who also live in any of the more than 100 properties in the Austin area that accept vouchers from the federal government’s Section 8 Housing Choice Voucher program that provides rental assistance to millions of renters across the country can also participate in I-DADS.

The Housing Authority launched I-DADS in partnership with The Man in Me, an Austin nonprofit that’s served dads for many years with the evidence-based 24/7 Dad® program of National Fatherhood Initiative® (NFI). The Man in Me continues to facilitate I-DADS groups to this day.

The Housing Authority hired Joshua as its first full-time I-DADS coordinator in 2017 using funds from a private foundation. The Housing Authority now uses funds from the Texas Department of Protective Service’s Prevention and Early Intervention (PEI) Programs to offer I-DADS. (PEI also funds other organizations across the state that deliver 24/7 Dad®. Click here to learn more about the incredible impact of the program run by those organizations.) Joshua started to facilitate 24/7 Dad® and subsequently received training on it from NFI. To meet demand for 24/7 Dad® groups, the Housing Authority also added Safe Alliance as a partner, another Austin nonprofit experienced in facilitating the program.

After realizing the importance of allowing dads who weren’t on a lease to participate in I-DADS—a brilliant recruitment tactic—the Housing Authority spread the word about the program and that families wouldn’t be penalized if a dad participated who wasn't on the lease. I-DADS built on that tactic with a combination of innovative and tried-and-true recruitment and retention tactics.

“We recruit by knocking on doors in our properties and give residents a flyer on the program—moms are often our primary recruitment tool because we see more of them as dads might be at work—and talk about the program. We also stand outside properties and talk about the program as people walk by. We also recruit through family members, such as children, who come by the Community Center [where we facilitate groups]. We also work through the property managers who know a lot about the situation in specific apartments who can share that if dad enrolls in the program that the Housing Authority won’t penalize the tenant if a dad is in apartment but not on the lease.”

Food always works as a recruitment tool—it’s a universal language for relaxing and setting a safe, non-threatening environment. In a Housing Authority, people talk with each other, so word-of-mouth is huge. As a service provider, my job is to make everyone as comfortable as possible. When I can make them feel comfortable—no matter their background—it makes a difference. Food helps break the ice. When you can create a space where someone feels comfortable, it makes everything easier including program retention. When dads start the program, they’re often apprehensive but when they get into a comfortable environment it helps them engage right away and they want to come back. They’ll also bring their friends who are dads and their wives and partners tell me how much they love the program.”

To recruit dads and spread the word about I-DADS Joshua joins:

“…every coalition in the city. I introduce myself and get on mailing lists. That lets other service providers know we have a fatherhood program that they can refer to. I cast a wide net. I’ve learned that a lot of people served by those providers are connected in some way to our properties—they often know someone in one of our properties and they share that we have a fatherhood program.”

I-DADS also uses incentives to retain dads. Shortly after launching the program, the Housing Authority partnered with Austin Community College to give refurbished computers to program graduates. Since then, I-DADS has used a variety of other donated incentives that serve as gifts for dads who attend a specific number of sessions. But the most successful recruitment tactic, Joshua said, is the safe, comfortable environment they create and the relationships the facilitators develop with the dads. When staff ask dads why they stayed in the program, dads point to that environment and the positive relationships with facilitators.

Like many of NFI’s partners across the country, I-DADS had to start delivering 24/7 Dad® virtually with the onset of the COVID-19 pandemic. (Click here to download our free tip sheet on how to deliver NFI’s programs virtually.) Fortunately, I-DADS had a head start of sorts because they had experimented with and offered virtual sessions before the pandemic to dads who couldn’t attend group sessions.

“Pre-pandemic we found there were some dads who wanted to attend in-person but had barriers, such as transportation, work, and child care. That’s when we started to experiment with video to work with dads one-on-one and to integrate them into in-person groups virtually. When the pandemic hit, we were already doing a hybrid model in which groups included dads participating in-person and virtually, but the pandemic required us do all-virtual groups. We trained a couple of volunteer dads we serve who were tech savvy on Zoom to reach out to other dads and recruit them into virtual groups and to get those dads up to speed on how to use Zoom. We call them our ‘in-house Geek Squad.’ I bought some Zoom training sessions for the volunteer dads so they could help other dads to use it.”

“For dads who are technologically savvy, participating in virtual groups wasn’t an issue in terms of how to use Zoom, but many dads we serve aren’t that savvy. So, we sent texts to their phones so we could have tech-savvy dads train those dads on how to use Zoom to participate. We started to use Uber Eats as an incentive—if you attend, we will deliver a meal to your family. We had dads open their Uber Eats package on camera. So, bridging the technology gap was a big deal as well as keeping dads engaged during virtual delivery.”

Challenges Wrought by the Pandemic

What I didn’t expect to hear Joshua say about their pivot was that, unlike most NFI partners we’ve spoken with, they initially had a more difficult time recruiting dads for virtual sessions rather than an easier time. The reason their initial efforts to recruit dads into virtual sessions stank, as Joshua characterized them, was they could no longer rely on their most effective recruitment tools. Their pre-pandemic recruiting relied on a lot of face-to-face interaction with tenants and staff of referral agencies and the word-of-mouth that resulted.

Moreover, they lost the value of the in-person atmosphere for retention. That loss placed an even greater burden on facilitators to engage dads and keep them coming back. As Joshua said:

Advantages Brought by the Pandemic

As so many of NFI’s partners have experienced, virtual delivery has had its advantages. Dads have been able to log in from anywhere to participate in 24/7 Dad® sessions. As long as they’re available at the time sessions are offered by I-DADS, from 7-8 PM in the evening, it’s been easy for dads to participate.

Joshua has also seen an advantage for dads’ mental health. Because the pandemic has caused people to become isolated, it’s had a negative effect on mental health. The virtual sessions have been a “life-saver” that’s helped dads connect and stay connected.

I-DADS recently returned to in-person program delivery but with a greater reliance on the hybrid model they instituted before the pandemic. Dads can participate in-person and virtually as part of the same group. They can come to any session in-person or they can participate virtually. I-DADS invested in equipment that makes their model easier to implement, such as a high-definition camera, projector, and screen so that dads can see each other whether in-person or virtual. They also offer all of their groups in a large community center. (Pre-pandemic I-DADS rotated holding groups in rooms at different HACA properties.) The center has the space and other standard equipment that can make 24/7 Dad® easier to facilitate, such as markers, a whiteboard, and a large monitor to show videos.

I told Joshua that their hybrid model is rare. I shared that the hybrid model now in use by many other NFI partners—at least among those I’ve spoken with—involves dads participating in groups that are in-person only or virtual-only. I asked whether they had or would eventually consider that other model. He said:

“I have considered doing in-person only and virtual-only groups. But my goal is to ensure that the program is available to as many dads as I can get to attend. I don’t want to close the door to any dads who want to participate. So, I’m not planning on experimenting with that other hybrid approach and sticking with the type of hybrid model we’re using.”

Hard to argue with that reasoning. Whatever works!

Now that’s a retention tactic that fits with any hybrid model!

Do you work with or partner with a Housing Authority in your community to run a fatherhood program?

What hybrid model, if any, have you considered using with the return to in-person program delivery?