Posted by Christopher A. Brown January 25, 2022
How to Help Dads to Help Their Kids Avoid ACEs
Have you heard the term “adverse childhood experience?” An adverse childhood experience (ACE) is an experience in... END_OF_DOCUMENT_TOKEN_TO_BE_REPLACED
Posted by Melissa Steward January 19, 2022
Give this One Thing to New Dads to Bring Them in Right from the Start
Posted by National Fatherhood Initiative January 11, 2022
How Effective Are Programs Supporting Unmarried, Nonresidential Fathers?

Lowe's, LG & Dove Men+Care: One of These Messages is Not Like the Other

Christopher Brown explains in The Huffington Post what's wrong with Lowe's and LG's new commercials and what they get wrong about fathers.

As you not-doubt know by reading our blog, from writing about work and family balance to relationships, we take fatherhood seriously. It's worth noting, especially given it's Father's Day week, that as you prepare to celebrate the dad in your life, be sure you understand how culture often portrays dads.

As Brown writes about the two new commercials by Lowe's and LG, these commercials, "...show that our culture still has a long, long way to go in portraying dads as competent parents." 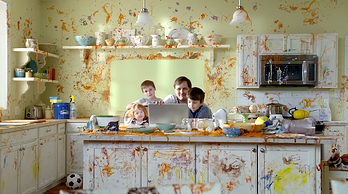 You can read Brown's full post here, but the Lowe's commercial called "Valspar Reserve: Video Call" is worth talking about in more detail.

Brown writes, "I've seen a lot of commercials in my nearly 15 years with NFI that have used humor to portray fathers in less than a positive light. But this Lowe's commercial is one of the worst I've seen. I don't find it humorous -- not one bit."

As you watch the video, ask yourself, is this really what we want to think of the dad in our life? Note some of Brown's concerns of this Valspar Reserve Paints commercials' portrayal of dad:

Sadly, the LG commercial "Just Like Magic" is just as bad in its portrayal of dads. Brown points out, "it's typical of the portrayal of dads by consumer brands as unintelligent parents who are, at best, caring but incompetent."

I appreciate Brown's point here, aside from him being my boss, he makes a great point:

What these commercials have in common, beyond the obvious, is that they reflect the double standard that too many consumer brands apply when portraying women and men as parents. (Notable exceptions include Dove Men+Care and Home Depot -- sorry Lowe's.) They attempt to empower women (the clear targets of the commercials) by demeaning men. 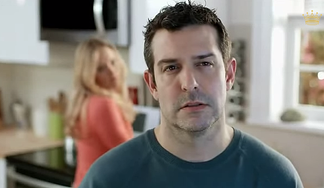 Reminder for brands: Father's Day is Sunday. Use all the humor you want in your commercials. Do comical stuff using dads and kids and your products, it's fine, really. But please, learn what "celebrating dad" looks like.

Dove Men+Care has not sponsored this post, but just as an example worth noting, watch this commerical and note the contrast in portrayal of fatherhood:

Between Lowe's, LG, and Dove Men+Care, which commercial do you prefer watching? Why?