Posted by Christopher A. Brown January 31, 2023
The Value in Customizing a Fatherhood Program
There’s a lot of emphasis these days on implementing fatherhood programs with fidelity. Indeed, many funders of... END_OF_DOCUMENT_TOKEN_TO_BE_REPLACED
Posted by Ave Mulhern January 24, 2023
A Few of My Favorite Things… and they are FREE!
Posted by Christopher A. Brown January 17, 2023
How Father Involvement and Bi-Strategic Parenting Positively Affect Children’s Brain Development

What Dads Can Learn From the Santa Barbara Killing Spree

I’ve blogged many times over the years about the disturbing “father factor” I’ve seen in virtually every shooting spree or mass murder that has made the news. In nearly every case, the shooter grew up in a fatherless home. 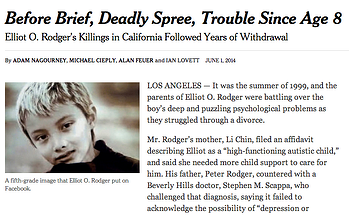 Following in the wake of the D.C. sniper, Sandy Hook, Aurora, Tucson, Chardon High School, and the Norway terrorist, the Santa Barbara case in the news today appears to be no different: a murder spree carried out by a lonely, angry, disturbed young man with a troubling family background.

At this stage, we don’t have a lot of detail about the “inner workings” of Elliot Rodger’s family life, but we do know that his parents divorced in 1999, and he, according to an article in The New York Times, seemed to be at odds with his family throughout his teenage years. And reports have shown that Rodger’s parents gave him lots of “things”: therapy, medicine, an expensive BMW. But did they give themselves?

I am not suggesting that his family life caused his violent behavior, but it is becoming more and more clear as these horrific incidents occur that a family life defined by instability and turmoil is a significant factor that must be considered as we figure out how to make such incidents less common.

But given Elliot Rodger’s clear hatred for women (and everyone else for that matter), there is another “father factor” that is important to consider here as well: the positive role that good dads can play in helping their daughters and sons navigate the world of dating.

Rodger, in his last video before he carried out his murders, suggested that he was doing what he did due to being rejected too often by the women he desired. It is understandable that such an act could cause young women to fear what the consequences may be when they turn aside unwanted advances from young men. How can fathers help their daughters get their heads around this?

For starters, it is important to note that Rodger said in his video that he thought he would be rejected if he asked a woman out. This was a young man who felt rejected; he was seemingly never rejected by an actual woman. So, young women and their dads should take heart that Rodger’s actions were those of a severely disturbed individual, not the result of a run-of-the-mill rejection by an actual woman.

That aside, it is the role of good dads to help their daughters find their prince without kissing all the toads.

Here is how dads can help:

So, when it comes to the question of how to “safely reject” a guy, it can be as simple as following the same basic rules you follow in all other human interactions. Be respectful. Don’t humiliate people. And, if dads are following the above steps, it is likely that their daughters are confident, assertive young women who are surrounded by good friends and supportive parents. These are notoriously good insulators against violence.

Finally, it is critical that dads work with their sons to help them navigate the world of dating, too. It is clear that Elliot Rodger had no idea how to interact with members of the opposite sex. Good dads ensure that their sons are confident, respectful, and hold the best interests of others above their own. They teach their sons that girls are worthy of love, not lust, and model this behavior in their own lives.

When all you have is a hammer, everything looks like a nail. As someone who works in “fatherhood,” it would seem I see fatherhood everywhere in the case of the Santa Barbara murders. But it appears that in every aspect of this horrible incident, there are lessons good dads can take away to ensure that they are raising sons and daughters who will be less likely to be the perpetrators or victims of such crimes.

We dads certainly can’t control everything, but we can give our children what they need the most: ourselves.

What's one thing you're teaching your son or daughter about dating?