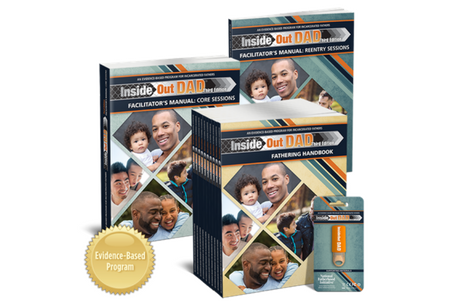 I’m excited to announce the release of the third edition of National Fatherhood Initiative’s InsideOut Dad® program! The first new edition of the program since 2012, it reflects our continued commitment to provide the highest quality, effective fatherhood programs and resources for use by organizations and other institutions that serve fathers and families.

The most widely used evidence-based parenting program designed specifically for incarcerated fathers, InsideOut Dad® is used in federal, state, and local corrections and corrections-related facilities (e.g. halfway houses) across the U.S. and in several other countries. Since releasing the first edition of the program in 2005, National Fatherhood Initiative (NFI) has trained 1,935 individuals to facilitate the program. These individuals represent staff from nearly 800 corrections facilities and community-based organizations that partner with corrections facilities and systems to deliver the program.

This first part of a two-part post focuses on the process we used to create the third edition and the reasons behind issuing it. It also provides a broad overview of the improvements to the program. The second post will provide details on exactly how we improved it.

The Process
The third edition integrates feedback from facilitators and from fathers who have participated in the program. NFI gathered this feedback for five years. Why so long a period of time? Because determining whether to issue a new edition requires:


By now you might have wondered what’s a “significant” change? A change that requires, for example:

We also don’t issue a new edition for its own sake or because “it’s time.” If a program that works doesn’t need to change, why change it? In this case, however, the feedback and evidence from the use of the second edition revealed that we needed to make enough of these kinds of changes to warrant the third edition.

There’s another vital reason we take care in issuing a new edition: the cost to upgrade to it. We’re very aware that many corrections facilities and systems and community-based organizations run a fatherhood program on a shoestring budget. We’re also aware that the use of funds to acquire a program and training on it can happen only during certain parts of a grant cycle (e.g. a startup phase) or specific times of the fiscal year. That’s why we include the following offers when we issue a new edition of any program. We:

The Improvements
I’m so pumped about this new edition. In part two of this post, I’ll share all of the ways we improved the program. Here’s a taste.

Now, if you just can’t wait until we publish the second part of this post next week, click here to download the information sheet to see exactly “What’s New!” And if you’re ready to order the third edition with pre-sale pricing, click here to get started!

Are you ready to implement a new, improved edition of InsideOut Dad®? There’s no better, more affordable time to upgrade.

Have you thought about acquiring InsideOut Dad®? There’s no better, more affordable time to start it.