Posted by Christopher A. Brown November 29, 2022
How to Advance Equity for Fathers in Human Services
If you’re a regular reader of this blog, you know that there’s a lack of equity in human services. Our nation’s human... END_OF_DOCUMENT_TOKEN_TO_BE_REPLACED
Posted by Erik Vecere November 22, 2022
Learn How A Crucial Partnership Will Open The Door to Reducing Child Abuse and Neglect
Posted by National Fatherhood Initiative November 15, 2022
Equipping Fathers and Organizations to Be More Father-Inclusive with Christopher Brown

Simple Advice You Can Give to Dads of Adolescents 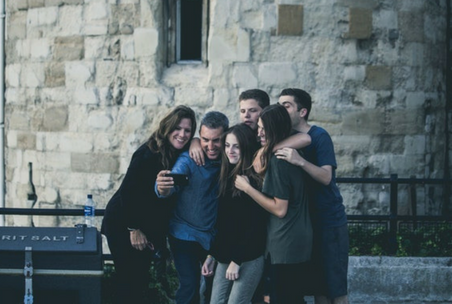 Fathering teens can be a challenge. There are unspoken rules (sometimes created by the teens themselves!), and as kids change and grow, some dads aren't sure where they "fit" into their teen's lives.

I came across a recent article entitled "Ask Mr. Dad: What adolescents need from their fathers". It had awesome, simple advice for dads of adolescents that I have Mr. Dad's permission to share.

Interestingly, his first suggestion to dads of adolescents is: Be There. Whoa. Sound familiar? That's the campaign message in our 'Be There" Marketing Kit you can use to recruit dads into your fatherhood program. But I digress...

Read on to hear what Mr. Dad says about fathering adolescents.

Dear Mr. Dad. I'm the dad of 12-year old boy-girl twins. I’ve already noticed that my relationship with them has changed, but I want to make sure I’m doing everything I can to stay involved as they enter the teen years. What do they need most from me and how can I gently steer them in the right direction?

A: Great question! There are all sorts of things that have an influence on your teen’s behavior: you, his friends, the media, his teachers, and himself. Unfortunately, you have control over only one: yourself. Fortunately, though, how you treat and raise your children will have an influence over how much credence they give to the other things in their life. Even though your teens will never admit it, they need you now more than ever. Boys are looking at you to show them what it means to be a man, what men do in our society, and how they treat women. Girls are looking at you to model the way they should expect to be treated by the men in their lives. Here’s what you need to do to be the most involved father you can be, as well as to reduce the chances that your teens will engage in risky or dangerous behavior:

Be There. As much as you can, as often as you can. Teens want to know that their dads care about them, and your physical presence is incredibly important. Having regular family dinners is a major sign of involvement. Be there when they come home from school if you can. Kids (including teens) who are left alone after school are more likely to drink or do drugs than kids who have adult supervision. Be there in spirit too. Turn off the TV during dinner, check your email and read the paper later.

Hugs. Your teens still want reassurance that you love them — even if they’re too embarrassed to ask for it. Don’t be shy about hugging your son; just respect his feelings and don’t do it in front of his friends. And don’t be afraid to hug your daughter. When their daughters start going through puberty, some dads back away from almost any physical contact, fearing that someone will think they’re behaving inappropriately. But those daughters — many of whom are confused and worried about their changing bodies and the way they look — interpret the lack of hugs from the most important man in their life as a sign that you don’t like the way they look, and that everyone else will feel the same way too.

Expectations. Having high-yet-reasonable expectations for grades, music practice, extracurricular activities, homework, etc., this lets kids know that you care and that you want them to succeed.

Monitor. Do you know how much time they’re spending watching TV? On social media? Do you know what kind of music they’re listening to? How they’re doing in school? The names of their friends? I’m not suggesting that you sneak around and shove your nose into everything, just pay attention. Dads who stay actively involved in their teens’ lives have children who are less likely to drop out of school, abuse drugs or alcohol, or become teen parents.

Reduce Temptation. Model the behavior you expect from them — your drinking, smoking, or doing drugs increases the chance that your children will. Seventy percent of teens say their parents have a lot of influence, compared to only 26 percent who say their boyfriend or girlfriend does.

Be sure to share this with the dads you serve who have teens or pre-teens. I'm hopeful that this will give them some insight into being the best dads they can be - even during an age when kids can be complicated.