Posted by Christopher A. Brown May 4, 2021
A Must-Read Book on Fatherhood Programming
If you’ve subscribed to this blog for a while, you know that I’ve blogged often about the fantastic research sponsored... END_OF_DOCUMENT_TOKEN_TO_BE_REPLACED
Posted by Ave Mulhern April 27, 2021
Paving the Way for a Powerful Fatherhood Pledge
Posted by Erik Vecere April 20, 2021
How to Facilitate a Fatherhood Program in a Virtual World: Part 2

Reminder to Mom and Dad: 18 Years Go By Fast

This summer our family has been on a journey. Although it is a positive one with so much to look forward to, I've finally realized that this journey also feels a little too much like a death. For whether the person goes swiftly and easily or slowly and laboriously, in the end, they are gone and it all feels like it went by far too fast.

Thus far I think I've handled things pretty well. I held it together through the rites and passages that have defined this past year:

All of it I've taken in stride. Until now. 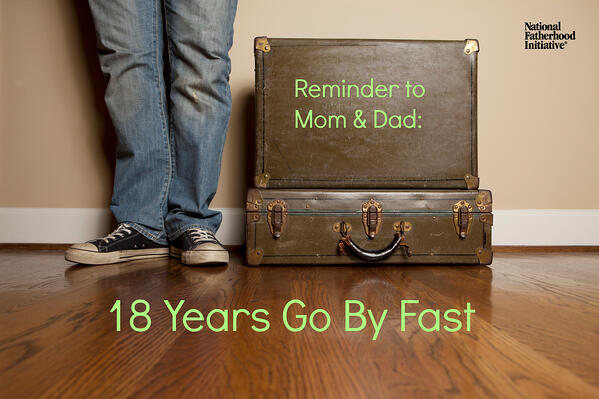 We are now on the eve of our son's departure and I'm beginning to lose it. His already early arrival at college for soccer tryouts has become even earlier by pre-tryout two -a-day workouts hosted by the captains of the team. "What?! Are you kidding me?!" was my rational response to the suggestion. Surely soccer does not trump a mother's final wish for a few more moments with her first born son. But apparently it does and the very thing that has caused so much maturity, growth and focus in my son's life, once again robs our family of a few more dinners together, a few more moments of laughter, a few more very precious memories.

I assumed we would be making the 12-hour trek to his new school together. Instead, a Megabus will snatch my son away and my husband and I will travel with all his stuff a week later. No son to converse with, simply his new bedding and towels, his clothes and, in his words, a drug store full of medicine (ibuprofen and cold medicine to be precise). Instead of a few final conversations on the trip, we will merely act as taxi driver for his belongings.

Regardless of the unusual method of transport, however, we planned it this way. From the moment he's been born we have been in a determined effort to equip him well enough for this journey. The years of admonishing him to brush his teeth, get dressed, go to school, go to church, put his dishes in the dishwasher, eat healthy, go to bed at a decent hour; it was all very purposeful. And then there were the years of lessons: how to read, write and study; how to clean a toilet and mow a lawn; how to say thank you and converse with adults. It was all with a purpose in mind. He is ready to achieve its purpose and it is good.

But even though it is all so good, he's leaving all the same. The grief is palpable and the world in which one family resides under one roof is left behind. I grieve for the younger siblings. I grieve for my husband who has invested so much time and effort to raise a hard-working man and I grieve for me, his mother. I'm so glad he has the privilege of going away to college and of playing soccer but in the end he'll still be gone and whether it be a few months or a few days, it's time for him to leave and there is simply no easy way to say goodbye. It just went by far too fast.

Experienced parents: what's one tip you would give younger parents to help them cherish the moments they have with their children?

Not ready for school to start? Try these previous posts: