Posted by Erik Vecere January 21, 2021
13 Lessons and Takeaways to Engage Your Stepdads
If I had a time machine, I would travel back to May 3, 2018, the day before I became a stepdad to four wonderful girls.... END_OF_DOCUMENT_TOKEN_TO_BE_REPLACED
Posted by National Fatherhood Initiative January 12, 2021
Showing Up for Fatherhood [An Awesome Podcast featuring NFI President Christopher Brown]
Posted by National Fatherhood Initiative January 6, 2021
Wyoming Pregnancy Help Center Sees Stronger Father Involvement Thanks to Technology

National Fatherhood Initiative and The Moms partner for a special New York City screening of Columbia Pictures' upcoming film Paul Blart: Mall Cop 2 with Paul Blart himself, Kevin James, on Monday, April 13th. The film releases in theaters nationwide Friday, April 17th, but don't miss out on the chance to see the new movie before anyone.

After six years of keeping our malls safe, Paul Blart has earned a well-deserved vacation, or has he? Sony's Paul Blart: Mall Cop 2 arrives in theaters Friday, April 17th. Vegas may have a new high roller, but not before that high roller visits NYC!

After six years of keeping our malls safe, Paul Blart has earned a well-deserved vacation, or has he? In this sequel, Paul Blart heads to Vegas for the annual Security Guard Expo with his teenage daughter Maya (Raini Rodriguez) before she leaves for college. While at the convention, he inadvertently discovers a heist – and it’s up to Blart to apprehend the criminals. Safety never takes a holiday and when duty calls, Blart answers.

Here's your invitation to the special event...RSVP if you can make it to NYC! 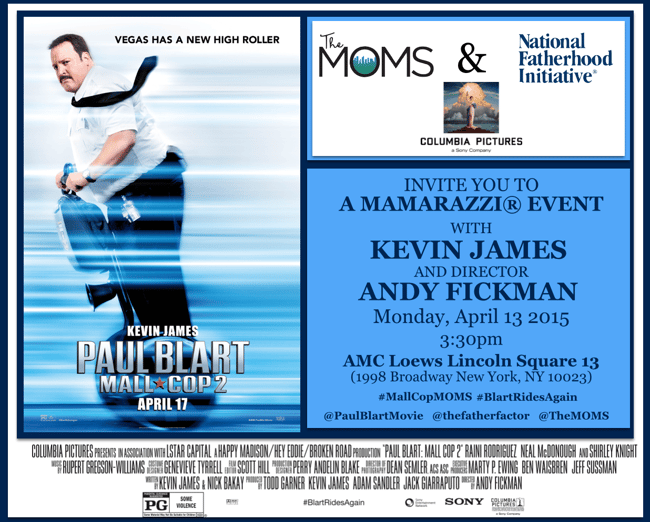 The Moms and National Fatherhood Intiative invite you to this special event:

A Mamarazzi® Event
with Kevin James
and Director Andy Fickman

RSVP here for the NYC screening > Click here to RSVP.

Can't attend the screening? Get the sneak peak of the official trailer here: