Posted by Christopher A. Brown January 31, 2023
The Value in Customizing a Fatherhood Program
There’s a lot of emphasis these days on implementing fatherhood programs with fidelity. Indeed, many funders of... END_OF_DOCUMENT_TOKEN_TO_BE_REPLACED
Posted by Ave Mulhern January 24, 2023
A Few of My Favorite Things… and they are FREE!
Posted by Christopher A. Brown January 17, 2023
How Father Involvement and Bi-Strategic Parenting Positively Affect Children’s Brain Development

What are the primary challenges of fathers who participate in responsible fatherhood programs? The Fatherhood Research and Practice Network (FRPN) recently released a brief that attempts to answer that question. (I sit on the FRPN's advisory committee.) Answering that question is critical because these challenges may be, as the brief notes, strongly associated with lower levels of father involvement in children's lives and lower quality coparenting relationships. 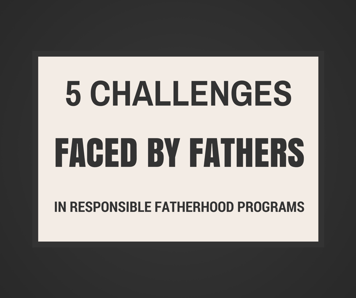 The top 5 challenges they mentioned in descending order of frequency were:

These challenges underscore one of the most vital pieces of guidance National Fatherhood Initiative (NFI) has provided to organizations through the years: the importance of helping fathers meet their most immediate, pressing needs as part of or even before enrolling them in a responsible fatherhood program. Meeting these needs is often the hook that encourages fathers to enroll in a responsible fatherhood program and to maintain their participation rather than learning how to be a better father and parent (e.g. through increased knowledge of child development, child discipline, etc.). Indeed, helping fathers overcome these challenges should be a component of a responsible fatherhood program either through the provision of services (often called "wrap-around services") by the organization running the program or the organization's partners.

The FRPN's findings are similar to the results of research that I conducted with Dr. Keith Cherry, a long-time colleague and friend, when NFI was part of the National Quality Improvement Center on Non-Resident Fathers and the Child Welfare System (QIC-NRF), a 5-year project (2006-2011) funded by the Children's Bureau in the U.S. Department of Health and Human Services through a contract with the American Humane Association. That research involved interviews with low-income, non-resident fathers involved in the child welfare system in four communities supplemented by interviews with fatherhood program practitioners who worked with these and other child-welfare involved fathers.

Like the fathers interviewed by the FRPN researchers, the fathers Keith and I interviewed also mentioned financial challenges as their most pressing needs. Our research (published in the journal Protecting Children) also involved delving deeper into the impact of these fathers' challenges on the fathers and their perceptions so that child welfare workers and fatherhood practitioners within and who work with the child welfare system could better understand these fathers and, as a result, work more effectively with them and develop better strategies to encourage enrollment in fatherhood programs offered by child welfare agencies.

We recorded, transcribed, and conducted an in-depth content analysis of the interviews. We identified the following themes in the lives of these fathers:

This deep understanding of these fathers' lives is so critical to effective program delivery. Staff of responsible fatherhood programs must look not only at fathers' needs but how those needs affect fathers. It is those affects that drive fathers' behavior. Indeed, the most successful of the programs we studied during our participation in the QIC-NRF were those seen by fathers to meet fathers' needs and care about fathers' welfare.

What are you doing to understand and solve the most pressing problems of fathers?

What are you doing to better understand the impact of father absence on the fathers you serve?