Posted by National Fatherhood Initiative September 20, 2022
Mass Shootings: Three Causes, Three Solutions
"We live in a country where mass shootings have become common place. A mass shooting is defined by the Gun Violence... END_OF_DOCUMENT_TOKEN_TO_BE_REPLACED
Posted by Ave Mulhern September 13, 2022
How to Bring Dads Back to School
Posted by Christopher A. Brown September 6, 2022
How You Can Help Dads Address the Maternal Mortality Crisis

The 5 Factors that Predict a Lack of Dad's Involvement

Last week I wrote about research that shows how important dad's presence is at the birth of his child.

Specifically, his presence increases the likelihood his child will be a healthy newborn. It also means mom is likely to be healthier.

On the other hand, when dad is absent, baby and mom are less likely to be healthy.

But what happens after the birth? How involved is dad at the earliest stage of his child's life? Those are two vital questions because, as we know, a child with an involved dad is more likely to grow up healthy physically, emotionally, and socially. 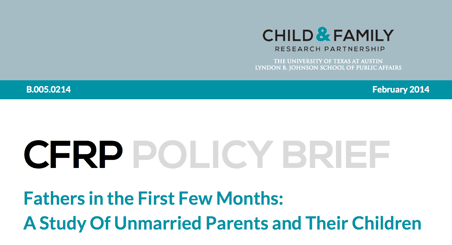 Another excellent research brief from the Child & Family Research Partnership at the University of Texas at Austin reveals the proportion of dads who are involved and not involved. It also reveals the factors that predict a lack of involvement.

Analyzing data from the same sample of 800 unmarried Texas moms that pointed to the importance of dad's presence at birth, researchers found that 27% of unmarried dads were completely uninvolved in their child's life a mere three months after their child's birth. (For details on how the researchers defined and measured involvement, read the research brief.) The good news, of course, is that nearly three quarters of the unmarried dads were involved.

Nevertheless, that's more than 200 children with an absent dad.

The researchers discovered that the following five factors led to a lack of involvement:

How can you use these findings?

What are you doing to spot and serve the dads at highest risk for a lack involvement after their child is born?

What programs and services can you provide or refer dads to that address the factors that predict a lack of involvement in the earliest stage of a child's life?