Posted by Christopher A. Brown January 31, 2023
The Value in Customizing a Fatherhood Program
There’s a lot of emphasis these days on implementing fatherhood programs with fidelity. Indeed, many funders of... END_OF_DOCUMENT_TOKEN_TO_BE_REPLACED
Posted by Ave Mulhern January 24, 2023
A Few of My Favorite Things… and they are FREE!
Posted by Christopher A. Brown January 17, 2023
How Father Involvement and Bi-Strategic Parenting Positively Affect Children’s Brain Development

The Hunger Games... Or, Trying to Get a Two-Year-Old to Eat 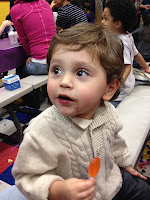 I have a two-year-old. Which means I spend most of the day worried that he is suffering from malnutrition as a result of eating nothing but ketchup for the last two days. I feel like part of being a great dad is making sure my kid eats healthy.

Apparently, two-year-olds are notoriously picky eaters. According to this article, "being a picky eater is part of what it means to be a toddler." That makes me feel a little bit better about my son's desire to eat pancake syrup, but not pancakes.

In all seriousness (too late!), it is a challenge and a stressor for my wife and I to make sure our son is getting the nutrition he needs. We have tried several of the tips in the above article, and some of them have worked. However, some have created comical results.

For example, the notion of using "dips" to hide "undesirable" foods like vegetables usually results in Little Vinny dipping his vegatables in ketchup and then licking the ketchup off the vegetables. At least tomatoes are good for you...

We have also tried to place his food on "fun," colorful plates with things like pictures of Elmo on them. The only result this often achieves is that when he angrily tosses his plate to the floor, it looks nicer as it soars through the air than if we had used a boring plate.

But not all hope is lost. He is certainly not losing weight, nor does he lack energy or brain power. He likes carrots, rice, and some chicken. And when desperate, we can always get him to eat corn chips, peanuts, or Nutella on wheat bread (maybe we should try Nutella on corn chips). And he has no problem drinking milk, water, and fruit/veggie juice. I guess I would just like to see him sitting at the dinner table with an elegant napkin tucked into his shirt eating a chicken cutlet and a mixed greens salad with fancy silver cutlery. He would also be wearing a tuxedo.

Then I remember he is just a toddler, and there is more to his life than eating. There is pooing and sleeping, which are two things he is also terrible at. I guess I will have to blog about those next week...