Posted by Christopher A. Brown January 31, 2023
The Value in Customizing a Fatherhood Program
There’s a lot of emphasis these days on implementing fatherhood programs with fidelity. Indeed, many funders of... END_OF_DOCUMENT_TOKEN_TO_BE_REPLACED
Posted by Ave Mulhern January 24, 2023
A Few of My Favorite Things… and they are FREE!
Posted by Christopher A. Brown January 17, 2023
How Father Involvement and Bi-Strategic Parenting Positively Affect Children’s Brain Development

Ryan O'Neal Not Alone as a "Lost" Father 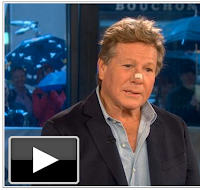 In a depressing interview on The Today Show yesterday, actor Ryan O'Neal spilled his guts about the multitude of problems he's had with his children and with his romantic partner of many years, Farrah Fawcett.

In the interview, Matt Lauer listed the various problems O'Neal's four, now grown, children have had, and then the conversation went like this:

Lauer: "Were you a bad parent?"

Lauer: "Why did you fail as a parent?"

First, I can't imagine how difficult it would be as a man in my later years (O'Neal is now 71) to have to face the fact that I was a failure as a father. After all, being a dad is the most important role a man will ever have (along with being a husband). If you fail at that, then, in many ways, your life is a failure. At least that is how I think I would feel.

So, I felt a mix of pity, pride, and anger at O'Neal as I watched him make this admission. Part of me felt terrible for the guy; what a tough thing to face. Part of me was "proud" of him for having the courage to make this admission publicly; it is a hard thing for a man to admit he failed at something, especially in public. But another part of me was screaming, "Why didn't you realize this 40 years ago when your kids were young and you still had a chance! It's too late now, you jerk!"

Second, there is much wisdom, but also an omission in Lauer's statement that "nobody's trained" to be a good father. While this is true (our own research shows that about half of men do not feel prepared to become fathers), it is also true that many sons learn how to be good fathers by watching their own dads. I don't know anything about O'Neal's father, but it would appear that O'Neal did not feel like he learned anything from him. He may not have been trained, but wasn't there the possibility he could have learned by watching? Apparently not...

That said, O'Neal's experience should be a lesson to our culture -- we need to make sure we are doing more to prepare men to be good dads, especially in an era of mass father absence. One in three kids grows up without his or her father in the home. And they are not being "trained." What kinds of fathers do we expect boys to become? It's hard to be what you don't see. And what kinds of fathers will our girls decide they need to have for their children?

From that perspective, it is hard to be mad at the Ryan O'Neals of the world who grow up in a culture that de-emphasizes the importance of dads and then expects them to be good fathers. While he should certainly be held accountable for not being as responsible as he should have been, there is at least an explanation that provides context.

What did you feel when you watched O'Neal's interview?