Posted by Christopher A. Brown January 31, 2023
The Value in Customizing a Fatherhood Program
There’s a lot of emphasis these days on implementing fatherhood programs with fidelity. Indeed, many funders of... END_OF_DOCUMENT_TOKEN_TO_BE_REPLACED
Posted by Ave Mulhern January 24, 2023
A Few of My Favorite Things… and they are FREE!
Posted by Christopher A. Brown January 17, 2023
How Father Involvement and Bi-Strategic Parenting Positively Affect Children’s Brain Development

The Difference Between a Man and a Boy

You know the guy. He’s a friend of yours. Everyone knows the guy who’d rather play video games 24/7 and live in his parents’ basement.

You know, the guy who takes the storyline behind his favorite board game a wee bit too seriously. Yeah, you know the guy, as do I. I think I’ve figured out what makes this guy different from the one not living in his parents’ basement. 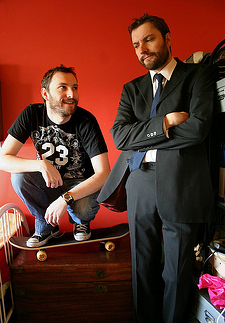 This difference is explored in Philip G. Zimbardo’s new research and book The Demise of Guys, which reveals things we’ve thought for years, but just haven’t talked about - that guys are “flaming out.”

Zimbardo’s most recent article in Psychology Today and his TedTalksay much about this generation of boys. Zimbardo uses vocabulary like “undermotivated” and “emotional disturbances” and points out the guy we all know, the guy who doesn’t play well with others, has no girlfriend or very little friends at all. This is tragic for sure. Guys who aren’t doing well in school and are socially inept probably aren’t on the fast track to success.

So what’s behind this research? Zimbardo says in his talk he doesn’t have the answers; he’s simply done the research and can now reserves the right to complain about this phenomenon. However, in Zimbardo’s complaining, he brings great insight into the core issue.

Zimbardo says we’re not asking the right questions when it comes to these young men and their motivations. The fact is, it’s not that these young men aren’t motivated at all, they’re just not “motivated the same way guys used to be,” says Zimbardo. He says society wants guys to be “upstanding, proactive citizens who take responsibility for themselves, who work with others to improve their communities and nation as a whole.”

Commenting on his own research, Zimbardo continues, “The irony is that society is not giving the support, means or places for these young men to even be motivated or interested in aspiring to these things.” He says media and education and society at large are the problems. Society is the “major contributor to this demise because [it is] inhibiting guys’ intellectual, creative and social abilities right from the start.” The result is young men with a lack of purpose, basic social skills, who live off of their parents.

Once a man finds a mate, problems really start. Many young men who manage to find a spouse carry entitlement issues and add little value to the relationship. Zimbardo rightly points to Hollywood films to describe these boys. Films like Failure to Launch, Hall Pass and Role Models (I added Role Models, Zimbardo hasn’t seen that movie yet!) present men as “living only for mindless fun and intricate but never-realized plans to get laid,” says Zimbardo.

While I think Zimbardo’s research does well to reveal the problem, the solution isn’t adapting some societal strategy to make men out of boys by retraining society to not inhibit them. Society has its issues, of course. But the problem, in my eyes, lies with the boy. There’s a difference between a boy and a man. Always has been, always will be. If you have no plan to leave your parents’ house, you’re a boy. If you don’t relate to women as equals, you’re a boy. If you aren’t emotionally able to cherish your wife, you’re a boy. If you play video games 24/7 and you’re not actually designing the games, you’re just a boy without a purpose.

Boys learn the kinds of behaviors Zimbardo talks about from their fathers. We live in an age of mass father absence. According to the U.S. Census Bureau, 24 million children in America -- one out of three -- live in biological father-absent homes. Two in three African American children live in father-absent homes. Consequently, there is a "father factor" in nearly all of the social issues facing America today. From poverty, maternal and child health, incarceration, crime, teen pregnancy, child abuse, drug and alcohol abuse, education, and childhood obesity – fatherhood changes these issues, for good or ill.

The difference, though, today is that fewer and fewer boys have the stabilizing presence of an involved, responsible, and committed father in their lives to help them navigate a world of temptations and make the transition from self-centeredness to other-centeredness – the transition from boyhood to manhood. The “demise of guys” is really, at its root, the absence of fathers.

What would your dad say was the difference between a man and a boy?