Posted by Ave Mulhern January 24, 2023
A Few of My Favorite Things… and they are FREE!
You may know that National Fatherhood Initiative® (NFI) is the nation's leading provider of fatherhood research,... END_OF_DOCUMENT_TOKEN_TO_BE_REPLACED
Posted by Christopher A. Brown January 17, 2023
How Father Involvement and Bi-Strategic Parenting Positively Affect Children’s Brain Development
Posted by Erik Vecere January 10, 2023
One-On-One Delivery of NFI Programs – So Simple, So Effective!

Kids Need Their Fathers: For Health, For Growth, For Life 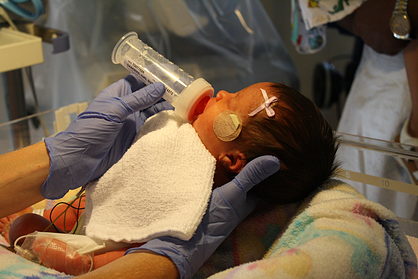 I’ll never forget the beeps. It’s been five years since first hearing the beeps from inside the Neonatal Intensive Care Unit (NICU) where my first daughter stayed two weeks due to pre-term labor.

She weighed four pounds, and I was scared to hold her with the wires coming from all directions. But the NICU nurses assured my wife and I that we would do no harm by holding and talking to her. She needed to hear the same two voices she heard throughout pregnancy. She needed to feel our presence in that cold, steel medical room.

According to the U.S. Census Bureau, 24 million children in America — one out of three — live in homes without fathers. Kids need their fathers.

Kids Need Their fathers…For Health
The same “NICU baby” from above recently proclaimed from the back of the car, “I want coffee, like Daddy!” as I ordered my favorite coffee from the Starbucks drive-thru. As I ordered a short cup of water to mimic my coffee, I realized something big — that for good or ill, the choices I make affect my children. As dad goes, so go the children. With Father’s Day in our rearview mirrors, we must be vigilant about impacting our children positively with the choices we make as dads.

Studies show that men who take care of their health with a good diet, regular exercise, and preventive screenings serve as role models for their kids’ health habits and are more likely to be around for all those important moments like graduations, birthdays and weddings. But more than being around, fathers model behavior for their kids, for good or ill.

Kids Need Their Fathers…For Growth
New research reveals that the love of a father is one of the single greatest influences on the personality development of a child. Results from the journal of Personality and Social Psychology Review showed that kids rejected in childhood felt more anxious and insecure as well as hostile and aggressive as adults.

Professor Rohner who conducted the research says, “children who feel unloved tend to become anxious and insecure, and this can make them needy. Anger and resentment can lead to them closing themselves off emotionally in an attempt to protect themselves from further hurt.”

The same is true for all children regardless of race, culture, and gender – the feeling and effects of rejection are universal.

Professor Rohner adds that the “same parts of the brain are activated when people feel rejected as when they suffer physical pain.” He continues, but ‘Unlike physical pain, however, people can psychologically relive the emotional pain of rejection over and over for years.’ His research shows a father’s input is particularly important for behavior and influences whether a child later abuses drugs or suffers mental health problems.

Kids Need Their Fathers…For Life
The National Center for Health Statistics reports that infant mortality rates are almost twice as much for infants of unmarried mothers than for married mothers.

Children whose fathers are stable and involved are better off on almost every cognitive, social and emotional measure developed by researchers.

How we start is usually a good indicator of how we finish. Of course we can make course corrections along the way. But giving kids a chance to start life in a healthy way matters. Involved fathers help infant mortality rates decrease and infant health increase. Being present and involved ensures children will grow and develop into mature, well-adjusted adults.

Dads matter–for good or ill. As dads go, so go the children. And as go children, so goes our society.

That is why National Fatherhood Initiative provides skill-building resources to help fathers increase their health literacy and get involved right from the start. Our Doctor Dad series of workshops help fathers learn about the well child, the sick child, the injured child, and the safe child. And our new Dad’s Pocket Guide contains practical tips on how dads can get involved with their newborns.

Parents, what was your most difficult adjustment after having a baby?

This post was originally written by Ryan Sanders for the National Healthy Start Association (NHSA). NHSA's mission is to be our nation's voice in providing leadership and advocacy for health equity services and interventions that improve birth outcomes and family wellbeing.