Posted by Christopher A. Brown January 31, 2023
The Value in Customizing a Fatherhood Program
There’s a lot of emphasis these days on implementing fatherhood programs with fidelity. Indeed, many funders of... END_OF_DOCUMENT_TOKEN_TO_BE_REPLACED
Posted by Ave Mulhern January 24, 2023
A Few of My Favorite Things… and they are FREE!
Posted by Christopher A. Brown January 17, 2023
How Father Involvement and Bi-Strategic Parenting Positively Affect Children’s Brain Development

UPDATE: A generous donor has offered to match dollar-for-dollar all donations given to our “Give a Second Chance” campaign through September 30, the end of our fiscal year. Your donation will now have double impact!

And don’t forget – anyone who donates $100 or more this month will receive a copy of Choosing Fatherhood: America’s Second Chance, an inspiring book of photography and stories of dads who have been impacted by National Fatherhood Initiative’s fatherhood programs in their local communities – and by your support that makes our work possible!

One of those dads is Shawn Kennedy, of Mobile, Alabama. NFI’s programs for new dads helped him get the right start in his fatherhood journey and connect heart-to-heart with his brand new baby daughter. Shawn told Lewis Kostiner, author and photographer of Choosing Fatherhood, about what he learned from NFI’s fatherhood program. 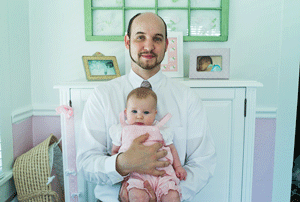 Shawn Kennedy […] and his wife lived in a small and lovely vintage South-style bungalow in Mobile. I had spent a few days with his father-in-law, who was taking Milt Scott from National Fatherhood Initiative and me around to meet the fathers in the area. Shawn has this beautiful baby girl in his arms, whom he carried with him all over the house. He even wore a shirt and tie for the picture. After I took the picture, I sat with him at his dining room table, and we talked. He said he was always open to learning how to become a better father. He told me [he] had taken some classes with NFI and learned a great deal about small things about fatherhood he never thought about. He was very clear with me: his family’s faith in the Lord gave him the strength to be a good and loving dad. I imagined he would be, always.

Because of the financial support of friends like you, we are able to help dads like Shawn be involved with their children and build their fathering skills no matter what stage of parenting they are in. Sometimes, the support and inspiration these dads find through our programs is the second chance they and their families need.

Your financial support is crucial to reach more families like Shawn’s. Will you make a donation before September 30? We have almost crossed the finish line for this fiscal year and your donation will be the final push we need to end strong and get started on our plans to help more dads next year.