Posted by Christopher A. Brown January 31, 2023
The Value in Customizing a Fatherhood Program
There’s a lot of emphasis these days on implementing fatherhood programs with fidelity. Indeed, many funders of... END_OF_DOCUMENT_TOKEN_TO_BE_REPLACED
Posted by Ave Mulhern January 24, 2023
A Few of My Favorite Things… and they are FREE!
Posted by Christopher A. Brown January 17, 2023
How Father Involvement and Bi-Strategic Parenting Positively Affect Children’s Brain Development

The Director's Guidance on "Parental Guidance" — Interview with Andy Fickman 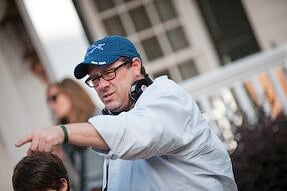 Just before Christmas, we had the pleasure of speaking with Andy Fickman, director of the new film Parental Guidance, in theaters now, starring Billy Crystal, Bette Midler, Marisa Tomei, and Tom Everett Scott. Crystal and Midler play Tomei’s character’s parents, and are grandparents to her and her husband’s three children. Mom and dad have to go away for the weekend, and they struggle with leaving the kids with their grandparents. Much intergenerational hilarity ensues, driven by the great comedic acting of Crystal and Midler.

The film does a great job of exploring issues around parenting, grandparents, and marriage. Take a look at what the film’s director had to say about it. We are hopeful his wisdom, insights, and humor will inspire you to go see the film this weekend!

On if this film was personal:

Andy Fickman: I’m a father, I have a 15-year-old son, and I think every day on the set you are bringing your personal life into it... It became a very personal journey for me…

On if he was going in trying to make a “fatherhood film”:

AF: Billy and I spoke so much in development about fathers… we are a little bit in this weird position because, look what the mother lovingly does. The mother helps carry the child in her womb, she goes through all the physical changes while we sit on the couch, she goes through labor, breastfeeds and has that maternal bond that is so beautiful and so specific that every dad knows the look on a child’s face when the child sees the mother. Every dad knows that moment of lighting up, you know, “The nurturer is coming!” So for dads, we have that weird pace, which is, am I the dad who comes home from my 9 to 5 job, and I’ve got my one hour of story time? So entering [into the movie we wanted to explore] what are [dads] hoping to pass on to our children, and what are they learning that they are then going to pass down to their children? 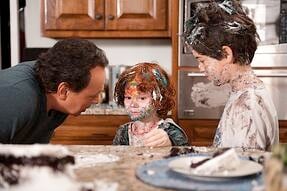 On how his relationship with his dad affected the themes of the film:

AF: My father passed away when I was 16 and I was very lucky that I had an uncle who became a surrogate, and I have three older brothers who became surrogates. But to this day my brothers and I talk about how lucky we were that our father provided such a role model for us, from education to social issues. So our challenge to us is we always feel like our responsibility is we have to pass down to our children what our father probably would have continued passing down to his grandchildren.

On the struggles grandparents sometimes face:

AF: Especially with the stuff in the movie where Billy is really struggling, he has some incredibly personal moments. The hardest thing to admit to anybody is that “I am not comfortable around my grandchildren” or “I don’t know how to talk to them.” I think those are very real things, and what we found throughout promoting the movie how many grandparent or parents have said that just because you have the title of parent or grandparent certainly does not mean you are comfortable with that title or that your relationship with your offspring is always a healthy one.

AF: That helicopter style of parenting is a very different world. There are whole stores dedicated to just early development of your child, and it’s great. But you also think about the classic line, “I was pretty sure I was just happy with a cardboard box.”

On if things really are better today for parents and kids:

AF: I remember we were talking on set one day about how great people are these days with health. True, I said, but make no mistake, all throughout history and all over the world, there are still kids born in a grass hut… So I definitely feel like it’s hard not to look a little like the marketing sham sometimes in modern society, where if we can come up with something, like the Snuggies commercial. “If putting on a bathrobe is too difficult for you, you need a Snuggies!” They’ll show commercial for things for children, where they’ll be like, “Tired of your child constantly falling off the bed? You need the new Bed Guard 2000!” That’s where we’ve gotten as a society, so when you put those generations together, it’s easy for them to Clint Eastwood squint their eyes at you and wonder, “Really, is that what you need?”

On the importance of strong marriages:

AF: From the very beginning, what we wanted to deal with was reality, and anybody’s who’s in a relationship knows that children can pose challenges. And what the husband and wife are dealing with is, I think, so universal. “What do I do for an hour of intimacy?” One of my favorite moments in the movie is when Tom grabs Marisa and takes her out on the patio and the kids are going crazy in the kitchen and he gives her a kiss, and she says, “Oh, that’s like a mini-date!”

Even his grandparents are talking and it’s very real. You don't get the impression that these are couples on the verge of divorce lawyers and dealing with the nastiness. You get the impression that these are two couples who are dealing with life and not always making great decisions, and just because I’m your spouse doesn’t mean I have to support you, and yet I am supporting you.

On the central importance of the relationship between mom and dad for the well being of kids:

AF: Bette has a line that a lot of people have really responded to when Marisa says to her, “You always take dad’s side.” And Bette says, “Yes, because children leave, and I’m gonna be left with him. You hit college and you said goodbye and your father stayed.” And I think that is so relatable to people.

Bette also says to Marisa, “You need to go and show your husband that you support him and believe in him and you want to be with him.” And Marisa’s character is coming up with so many excuses, the children being the entire excuse – the children, the children, the children. And Bette and Billy are saying, you aren’t even giving us a chance; you are assuming we are going to fail with your kids… In those moments, Bette’s trying to point out, especially in a marriage, that the one night away or those two nights away… you really need it.  Two people are in love, they are human and sometimes it’s nice to be in that hotel where the phone’s not ringing, the kids aren’t screaming, and I think that’s important for those relationships, because as we all know, happy parents returning home are only going to be that much better for the kids.

AF: The three grandchildren are so raised to be a certain way that when they see the behavioral attitude changes that their grandparents bring to the house, it’s confusing for them because then, are they going to get in trouble with mom and dad for eating the cake. I think that’s what a lot of people deal with because there’s always the sense of, when you’re a kid, you always want to be around your grandparents, because they’re like, “Here's $10.” And you’re like, “Yay!”

On what he wants today’s dads to take away from the film:

AF: It’s twofold. One is a reminder to dads that we do play a part, we do have a role, and that role never changes. It’s easy to say, let your mom handle that, but it’s important that we’re handling that as well.

And I think it’s also that we have different experiences that we are bringing to the table, and a child lucky enough to have both a mother and father can give them different pieces of wisdom. There’s that great moment in the movie where Billy’s watching baseball with his daughter and it’s a really sweet scene because you can imagine what it was like when she was 11 years old and he says, and then you got all girly on me… So hopefully that’s the sort of thing that we can not escape but continue in trying to learn their world as much as ours.

Get tickets to the very family-friendly and funny, Parental Guidance, rated PG.