Posted by Christopher A. Brown January 31, 2023
The Value in Customizing a Fatherhood Program
There’s a lot of emphasis these days on implementing fatherhood programs with fidelity. Indeed, many funders of... END_OF_DOCUMENT_TOKEN_TO_BE_REPLACED
Posted by Ave Mulhern January 24, 2023
A Few of My Favorite Things… and they are FREE!
Posted by Christopher A. Brown January 17, 2023
How Father Involvement and Bi-Strategic Parenting Positively Affect Children’s Brain Development

Do Fathers Have a Role in Gun Control?

This is a guest post by Jason Bruce. If you are interested in writing for us, send an email. 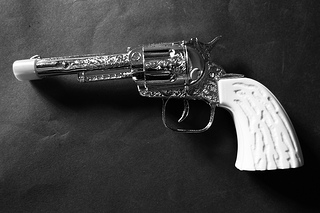 I grew up without toy weapons at home. My solution was to make my own weapons. I made cardboard machine guns and grenade launchers like a young Sylvester Stallone in Rambo. I made Samurai swords out of tree branches and any L-shape object became a hand gun including my baby sister’s Barbie dolls.

Many parents forbid their children from playing with toys guns. Many view toy weapons as corruptors of children, exposing them to aggressive and violent behaviors and reinforcing gender stereotypes.

The tragic event in Newtown, CT put the debate on gun control in the spotlight again and many parents followed suit imposing their own toy gun control and zero-tolerance policies in their households. But is this the right response to the issue of violence? Should parents keep their sons away from toy weapons and impose a weapon-free zone at home? Should zero-tolerance policies be extended to playgrounds, schools and other public venues?

Boys naturally gravitate toward weaponry not because of their desire to kill or hurt another human being but because of their desire to be heroes. Boys have a natural willingness to do great things, be adventurous and to be rescuers. They need to feel like heroic warriors and toy weapons help bring out their imagination and act out their fantasies. It is one way boys are molded to be mature courageous men.

Play is play and violence is violence. What’s essential is that fathers educate their sons to understand and differentiate the two in their playtime. Their make-believe games are opportunities to teach boys to distinguish between what’s right and wrong and what’s good and evil. Penny Holland, author of "We Don't Play with Guns Here," says toy weapons were "part of...making sense of the world (imitating) timeless themes of the struggle between good and evil."

Parents should recognize and respect what young boys are dreaming to be and experiencing in their play. Fathers were once young boys too and played fierce battles with evil monsters and alien invaders. We usually grow up wanting to be heroes.

Sometimes I wish my son would simply pretend he’s a magician or a race car driver; but right now he wants to be a gun-trotting Pirate and Captain America. All a weapons-tolerant dad like me can do is to play along with my imaginary laser gun and light saber and model to him the right and honorable way to save the day.

Do you let your child play with toy weapons? Why or why not?

Jason is a blogger and social media specialist for the Colson Center. He lives in Northern Virginia with his wife and two kids. Follow him on Twitter (@JasonBruce) and visit his blog The Living Rice.