Posted by Ave Mulhern January 24, 2023
A Few of My Favorite Things… and they are FREE!
You may know that National Fatherhood Initiative® (NFI) is the nation's leading provider of fatherhood research,... END_OF_DOCUMENT_TOKEN_TO_BE_REPLACED
Posted by Christopher A. Brown January 17, 2023
How Father Involvement and Bi-Strategic Parenting Positively Affect Children’s Brain Development
Posted by Erik Vecere January 10, 2023
One-On-One Delivery of NFI Programs – So Simple, So Effective!

Family Structure Can Be a Life or Death Matter

A little over a year ago, I wrote on this blog about how the Sandy Hook shooting may have been another crime of fatherlessness.

In a recent interview in The New Yorker about the shootings, Peter Lanza, the father of shooter Adam Lanza, makes remarks that confirm our worst fears about Adam’s life and the sad reality facing far too many of our nation’s children.

The part of the story that struck me the most was this:

Peter hadn’t seen his son for two years at the time of the Sandy Hook killings, and, even with hindsight, he doesn’t think that the catastrophe could have been predicted. But he constantly thinks about what he could have done differently and wishes he had pushed harder to see Adam. “Any variation on what I did and how my relationship was had to be good, because no outcome could be worse,” he said. Another time, he said, “You can’t get any more evil,” and added, “How much do I beat up on myself about the fact that he’s my son? A lot.” (emphasis mine)

At a time when forces in our culture are trying to discount the importance of family structure for the well being of children, Lanza’s remarks are another tragic but important reminder of the unfortunate reality facing children in father-absent homes: they usually have limited or no contact with their dads. 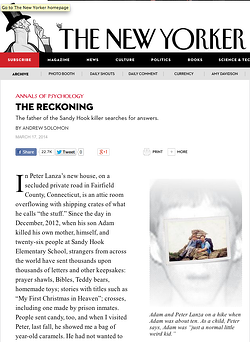 The fact that Peter -- who had divorced Adam’s mother, moved out, and remarried in 2009 -- had not seen his son in two years should not be a surprise to anyone familiar with the research on father absence. That research tells us that one-third of children in father-absent homes have not had any contact with their dads in the last year, and another third have contact once per month or less.

Why does it work out this way? Human nature, and the nature of how men think about family. Men tend to think of their families as a “package” – the wife and kids. What is the age-old question that every guy asks every other guy? “How are the wife and kids?” So, when a father’s relationship with his wife fails, his relationship with his children too often fails with it, especially when he starts another family – a new “package” – elsewhere, just like Peter Lanza did.

There were no legal barriers preventing Peter Lanza from being involved in his son’s life, yet he chose not to be involved. And again, the research confirms that fathers not living in the same homes as their children become distant and disconnected over time.

But despite the evidence, there are too many powerful forces in our country running away from the data on the importance of family structure. “Family revisionists” want to convince us that “any family structure will do” when it comes to raising children. This is insane – it doesn’t square with ANY research I’ve ever seen and doesn’t jibe with that we know about human nature.

When will we learn? It seems even when yet another boy from a fatherless home strikes out in rage and murders people, we still aren’t jarred enough to focus our energy on strengthening two-parent families, marriage, and father involvement. I am always mesmerized by how we are so willing to settle for second best when it comes to our children’s well being, especially when decades of research have made it clear what the best actually is – for a child to be raised by his/her married, biological (or adoptive) parents.

Of course there are exceptions to the rule. Not every child raised in a single-parent home becomes a murderer or drops out of school. But that doesn’t mean we can ignore the research.

Here’s an analogy to make it clearer.

We have tons of data on the harmful effects of smoking. We know that, on average, people who smoke are at greater risk for heart disease and certain forms of cancer. However, not everyone who smokes dies from smoking, and you probably know someone who smoked his whole life and lived to a ripe old age! So, does that mean we should ignore the research on smoking and conclude that, because of the exceptions, that smoking is not unhealthy.

So, why should it be any different with the data on family structure? Sure, there are always exceptions to every rule, but it does not make three plus decades of social science research disappear. Even more, we now have good evidence that father absence causes the problems it’s associated with, such as poverty and crime.

In other words, father absence is not just correlated with problems for children – it is a cause of those problems.

Adam Lanza’s case may have been extreme, but our nation’s prisons are filled with boys – and increasingly girls – who grew up in fatherless homes. So, the next time you are tempted to discount the critical role that family structure plays in determining the level and quality of a father’s involvement with his children, take a look at the research, think about smoking, and do whatever you can in your life to celebrate and encourage the formation and maintenance of two-parent families and strong marriages.

After all, our children deserve the best, don’t they?