Posted by Christopher A. Brown June 28, 2022
Teach Dads These 3 Qualities of Successful Fathering
“Habits may be the smallest units of transformation, but they’re also the most fundamental. They are the first... END_OF_DOCUMENT_TOKEN_TO_BE_REPLACED
Posted by Ave Mulhern June 22, 2022
24/7 Dad® - Worth the Wait
Posted by National Fatherhood Initiative June 16, 2022
[Father’s Day Special] The CHI Podcast featuring NFI President Christopher A. Brown: Why Dads Matter

Fathers Struggling to Connect with Their Kids? Have Them do This to Fix Things. 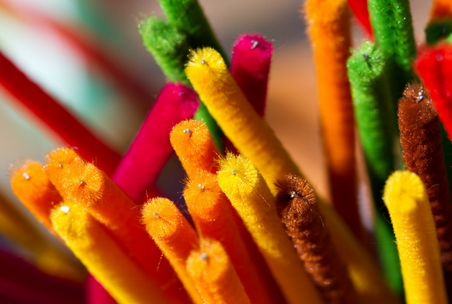 Recently, I started facilitating a men’s class for a group of fathers in a homeless shelter’s residential treatment program. I am using National Fatherhood Initiative’s evidence-based program called 24/7 Dad®, which is designed to help men develop the skills they need to be involved, responsible and committed fathers. This is much needed by the guys in my class because years of substance abuse and addiction have frayed their connections to their children.

As a class icebreaker, I gave each father a pipe cleaner and asked him to form it into something that represents his relationship with his father. Then, each man was given an opportunity to tell why he made what he did. Indeed, this was a powerful and revealing exercise. For example, one man formed a dollar sign and told how his father abused him as a young boy. However, at some point, his dad realized his behavior was wrong and began to shower his son with money to make amends. But, by this time, this man had found a new “relationship” with drugs. So, his dad’s money just hastened a spiral down into a destructive addiction.

But what I found most interesting was that about half of the fathers formed their pipe cleaners into a simple circle. When I asked why, they told me that their fathers were just “zeros” in their lives because they abandoned them early in life. So much so, that these men got nothing from their fathers and knew nothing about their fathers. Indeed, a child spells love T-I-M-E and has a “hole in his soul” in the shape of his dad. So, when a father is unwilling or unable to fill this hole, it can leave a deep wound that is not easily healed. In this case, these men tried, unsuccessfully, to fill that hole and heal that wound with drugs.

In any case, when the last man finished his explanation, I asked a question that caused an uncomfortable silence. It was this: If I gave your children a pipe cleaner today, what do you think they would make to represent their relationship with you? You see, in that moment, and probably for the first time, these men realized that, as fathers, they had created for their children the thing that they hated as children–an absent father. Alas, they were passing on to their children a painful legacy they had inherited from their own fathers. In fact, one of the fathers who made a zero acknowledged that his children would likely make the same thing he did, but he wanted them to make a heart instead.

But, it’s not impossible…

Several years ago, I wrote a book called, Bad Dads of the Bible: 8 Mistakes Every Good Dad Can Avoid. The chapter I wrote about the mistake of abandoning a child is instructive for these fathers and others. You see, if you have abandoned a child—physically, emotionally, spiritually, or all three—figuring out how to make things right can be challenging. After all, it’s likely that a child would be hurt and/or angry. Plus, a child may have a difficult time putting emotions into words. That’s why, as a father, one must be proactive and take the initiative to rebuild the relationship. Accordingly, I have found that focusing on the 3RSs (Repent, Reconcile, and Restore) works very well in these situations.

Let’s say that you had an antique chair in your home that had been passed down through your family for generations. In fact, this chair was so precious that no one was allowed to sit in it. Imagine that I came to your home, sat on the chair and broke it. You would probably be pretty angry, right? Now, what if I started grabbing the pieces to try and put it back together. It’s likely in your anger you would say not to touch anything.

However, if I immediately started to apologize profusely (i.e., repent) for my carelessness and I promised to be more careful in the future, chances are your heart would soften. In other words, my apology would significantly change your attitude. Why? Repentance is a sign of remorse and contrition.

And therein lies a powerful lesson that prodigal fathers often forget. Because men are doers by nature and because saying that you’re sorry takes true humility, too many fathers make the mistake of trying to reconcile before they repent. Remember, Proverbs 15:1 says that a soft word turns away wrath. An apology is the soft word that a child needs from an absent father.

So, after I have repented, we can start to put the chair back together. The word reconcile means “to settle or resolve.” Seeking a child’s forgiveness will enable a father to settle and resolve the break in the relationship. The “superglue” called commitment is critical for reconciliation in order to bind a father and child heart-to-heart. Of, note this will not be an easy process and it will take time. So, an absent father will need to be patient.

Once the pieces have been put back together, it will start to look like a chair again. But, whenever something is broken, there will always be a few pieces you can’t find. So, you will need to add some wood putty to fill in the gaps. You will need to sand it to smooth out the rough spots. And you will need to varnish it to make it as much as possible like it was before. To restore means “to reestablish, recover, and rejuvenate.” From a relationship perspective, this means to establish trust, which, once broken, can only be proven by testing over time and passing the test. After all, the only way that you know if a chair has been truly restored is to sit on it! So, prodigal fathers should expect to be tested by their child. They must patiently endure these tests and be steadfast in keeping their promise to change in the future.

Finally, it is critical for a father in this situation to bear in mind that he may need to go through the “3R” process with his wife or his child’s mother. It’s safe to assume that she will have a fair amount of resentment against him too. Mothers are very sensitive to the pain that their children experience. Therefore, regaining the mother’s trust is on the critical path to regaining the child’s trust. No doubt, again, this may be difficult. But it’s necessary if a father wants his child’s real—not just pipe cleaner—heart.

This article was reposted with permission from the author. To view the original article, click here.