Posted by Christopher A. Brown January 31, 2023
The Value in Customizing a Fatherhood Program
There’s a lot of emphasis these days on implementing fatherhood programs with fidelity. Indeed, many funders of... END_OF_DOCUMENT_TOKEN_TO_BE_REPLACED
Posted by Ave Mulhern January 24, 2023
A Few of My Favorite Things… and they are FREE!
Posted by Christopher A. Brown January 17, 2023
How Father Involvement and Bi-Strategic Parenting Positively Affect Children’s Brain Development

Recently, Catholic Charities’ Asylum Hill Family Center was featured in the Catholic Transcript Online - the Newspaper of the Roman Catholic Archdiocese of Hartford Connecticut. And guess what? They've used NFI's 24/7 Dad® group-based program to reach over 600 dads that have come through their doors over the last 2 years.

But they don't just offer the 24/7 Dad® fathering program - they offer other "wrap around" services to residents such as parenting skills, advocacy/empowerment, job training and support, homeownership training, money management/budgeting classes, and more.

You see, 24/7 Dad® and wrap around services are so happy together (are you humming The Turtles song yet?)

According to NFI's Director of Program Support Services, Michael Yudt, "The 24/7 Dad® program is an ideal compliment to wrap around services such as job training, support, and financial literacy because the program speaks to WHY men do what they do. Fatherhood can provide men with a greater context and purpose for life, and when you tap into that, you can make significant in-roads in the other service areas as well."

Michael continues, "Motivating men to care more about their children is a great way to capture the heart of a man, and 24/7 Dad® does just that." 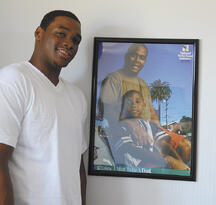 Speaking of motivation, the Catholic Transcript article features Kyle Parrish (pictured right) not yet 21 years old, in a relationship, and father to a son who's just barely a year old. Due to an injury on the job, bills and stress mounted as he waited on a Workmen’s Compensation settlement. One day, he walked into a store in the same building as the Asylum Hill Family Center, and began talking with one of the center's Pathways to Responsible Fatherhood program representatives. A year later, Parrish had participated in the center's 24/7 Dad® program, and other services, and says he feels like a new man.

Lois Nesci, CEO of Catholic Charities, said the program began about two years ago because fathers were an underserved segment of the population. "As they’ve [fathers] developed the skills for employment, their self-confidence increases," she said.

"Although they were somewhat involved in the lives of their children, they recognized, and we recognized, that they needed to learn better parenting skills," Ms. Nesci said. "They needed to learn ways to be more engaged with their children and their families and to develop the resources in order to become more self-sufficient. In addition to parenting skills, we also provide them with classes in financial literacy and also help them build their employment skills."

And that's great news because according to Mr. Parrish, the 24/7 Dad® fatherhood program has helped him:

Fathers can learn all this and and more through the 24/7 Dad® program. In fact, NFI Staff has worked with thousands of community based organizations who provide services to their neighbors in the community, and include 24/7 Dad®. Some common organizational implementations are:
Sound Off: How is your organization incorporating 24/7 Dad® into its wrap-around services? Why does it work for you?