Posted by Christopher A. Brown January 31, 2023
The Value in Customizing a Fatherhood Program
There’s a lot of emphasis these days on implementing fatherhood programs with fidelity. Indeed, many funders of... END_OF_DOCUMENT_TOKEN_TO_BE_REPLACED
Posted by Ave Mulhern January 24, 2023
A Few of My Favorite Things… and they are FREE!
Posted by Christopher A. Brown January 17, 2023
How Father Involvement and Bi-Strategic Parenting Positively Affect Children’s Brain Development

Have Dads Stepped Up During the Pandemic? 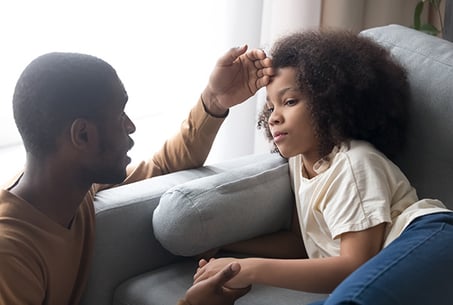 The pandemic has brought numerous challenges to parents from keeping their families safe from the virus to adjusting to work from home to helping their children with virtual learning.

Fortunately, research has helped me—and it can help you—begin to understand those effects.

I wrote in this blog last August, a study by researchers at Harvard University showed the pandemic has had positive effects on the relationship between dads and their children. The researchers found that found that dads are:

Since then, other researchers have commented on these and other positive effects, including the benefits for children’s development.

Less researched has been the effects of the pandemic on dads’ and moms’ care of children and the home.

As you undoubtedly know, despite the increase in recent decades in the proportion of childcare and housework performed by American dads compared to moms, dads continue to lag behind moms in performing those tasks. (This trend exists in many other countries as well.) But with the pandemic forcing so many dads to spend more time at home, the question I started to ask was…

Have dads stepped up to do even more of these tasks than normal?

The answer depends on when during the pandemic I asked that question.

Research conducted with 1,234 Canadian couples found that dads stepped up early in the pandemic. Specifically, during Canada’s first nationwide lockdown, dads performed a greater proportion of childcare and housework than before the pandemic. Dads’ help in meal preparation, for example, increased from 46 percent pre-pandemic to 50 percent post-pandemic. Couples reported similar small increases in cleaning up after meals and in cleaning the house, and a larger increase in grocery shopping.

Couples reported the largest gain in dads organizing and planning their children’s activities—46 percent pre-pandemic to 57 percent post-pandemic. They reported smaller increases in dads’ physical care of their children, as well as, reading to/with, monitoring of, and talking with/listening to their children.

But what about American dads? Did they step up early in the pandemic?

A study of 1,025 American parents that measured equal share between parents in domestic labor found that dads’ share of childcare and housework had indeed increased. Specifically:

So, if dads stepped up early in the pandemic, have they continued to step up?

According to a study of 1,375 Australian and American parents, the answer to that question isn’t a good one. While researchers also found both countries’ dads stepped up early in the pandemic, particularly with housework, those researchers noticed a divergence with Australian dads continuing to step up even more with childcare and housework as the pandemic continued while American dads stepped back.

As an American dad, when I learned of this research, I became disheartened. And my reaction was exacerbated by the fact that each of these studies noted that moms increased their contribution to domestic labor even more during the pandemic than before it began. Moms’ plates were even more full than normal. (The pandemic also had a disproportionate effect on mothers losing their jobs, especially early on.1)

So, I began to wonder whether American dads are somehow different than dads in other countries. Do we not have the mettle to continue to step up?

As with all research, the answer to such questions alludes us until more research starts to paint a clear picture. One study does not make a body of research upon which to hang our hats.

Nevertheless, as the researchers who conducted the study of Australian and American parents found, American dads fell back on their role as breadwinners.

One explanation is that American dads don’t contribute as much to domestic labor as dads in countries with a more egalitarian division of that labor. Moreover, we have a culture of “overwork.” We work more than dads in other developed countries. American dads have probably struggled more with the stress and anxiety caused by the increase in domestic responsibilities wrought by the pandemic. We're simply not as well-equipped experientially and emotionally to handle such a sudden increase in the level of that responsibility.

But there are certainly other factors than cultural norms at play, most notably countries’ varying responses to the pandemic. The U.S. was much slower to move than many other countries to respond with lockdowns, and those lockdowns occurred piecemeal and inconsistently at the state level compared to the national level response in other countries that affected all parents at the same time. That difference resulted in a disproportionate effect of the pandemic on American dads based on where they live. And that difference could have affected the sample the researchers used, thus affecting their results.

So, as I said, we need more research to know whether American dads have continued to step up during the pandemic

Having just passed the one-year anniversary of the start of America’s reaction to the pandemic, we have the unfortunate opportunity to build upon this research. As a keen observer of and advocate for dads’ involvement in the lives of their children, this is an area of research I would have preferred to not write about.

But here we are.

What do you think? Have dads stepped up during the pandemic?

If you’re a dad, have you stepped up?

What about the dads you know or serve? Have they stepped up?

1 While the percentage of moms actively working outside the home decreased more than dads—in large part because moms worked in the types of jobs hit hardest by the pandemic (e.g. service industries)—the pandemic still hit dads hard. According to the U.S. Census Bureau, in April 2020 the percentage of working dads dropped 14.7 points compared to a 21.1-point drop for moms. By January 2021, the employment of moms compared to dads had nearly returned to pre-pandemic patterns.