Posted by National Fatherhood Initiative May 24, 2022
The State of Moms and Dads in America (2022)
This article is written by Mike P. Taylor and was originally published at the Dad Well Done. It is republished here... END_OF_DOCUMENT_TOKEN_TO_BE_REPLACED
Posted by Christopher A. Brown May 17, 2022
Here’s What We Know About the Work of Federal Fatherhood Grantees
Posted by Ave Mulhern May 10, 2022
3 Ways to Keep Fatherhood Program Group Sessions Focused and on Track

How to Help Dads with Depression 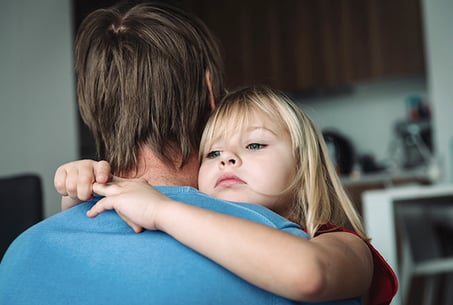 Do you work with dads who have experienced depression?

If so, some exciting research has emerged on how the development of self-efficacy around being a good father can mitigate the effects of depression in dads. That mitigation is vital because it can improve the relationships between dads and their children.

The researchers concluded that:.

“HS/EHS services or early childhood services that aim to promote positive parenting practices and develop healthy parent-child relationships among low-income fathers should give attention to strengthening PSE in fathers.”

So, if you run or want to start a program for dads with children in Head Start, Early Head Start, or any other setting, then using an evidence-based program like the 24/7 Dad® program of National Fatherhood Initiative® can help the dads you serve develop the parenting and fathering self-efficacy that’s vital to healthy relationships between dads and their children. 24/7 Dad® has been found to increase the parenting and fathering awareness, knowledge, and self-efficacy dads need to be the best dads possible.

NFI partners with many HS and EHS programs across the country to run 24/7 Dad® and our other programs and to use our other fatherhood skill-building materials. Take Dads in Action, for example. It’s a program of the Monterey County (CA) Office of Education’s Head Start Program. Dads in Action uses 24/7 Dad® to serve Head Start dads and dads in the larger community. The 24/7 Dad® facilitators appreciate several aspects of the program’s curriculum. As Dads in Action coordinator Alvaro Suarez once told me:

“[The curriculum] definitely provides dads with information developed with fathers’ perspectives in mind. It’s a bridge between fathers and mothers, such as with co-parenting. It lets fathers know about their role in their child’s life and the importance of fathers being present. The curriculum facilitates conversations that are difficult to have. It’s unique in that it opens dialogue with fathers. The thing it does best is it definitely gives fathers a unique voice—the content voices a lot of concerns dads think about but might not say or be comfortable talking about—like co-parenting and domestic violence—by facilitating conversations.”

Are you interested in exploring the range of NFI’s evidence- and research-based programs that can help you build dads’ parenting and fathering self-efficacy? Click here to learn more.

Are you interested in exploring NFI’s online, on-demand program Fathering in 15™ that dads can access anywhere, anytime, and on any device? Click here to learn more.