Posted by Melissa Byers August 16, 2022
[Free Resources] Share the Success Sequence With Families You Serve
A few weeks ago, I posted a blog that highlighted the most recent findings on how the success sequence is effective for... END_OF_DOCUMENT_TOKEN_TO_BE_REPLACED
Posted by Christopher A. Brown August 9, 2022
Have Americans’ Attitudes About Stay-at-Home Dads Truly Changed?
Posted by National Fatherhood Initiative August 2, 2022
Parenting Styles – Which One is Best?

How Many Children Won’t Buy a Gift for Dad?

As Father’s Day 2016 approaches, it’s time to take stock of how many children won’t experience the joy of giving their dad a gift and the smile, hug and kiss that follows.

Perhaps you wonder whether the number is still bleak when considering that so many children today live in blended or adoptive families. It’s still bleak. More than 20 million children, slightly more than 1 in 4, grow up without a biological, step or adoptive father.

Nevertheless, there is some good news in the battle against father absence as reflected in the chart below. 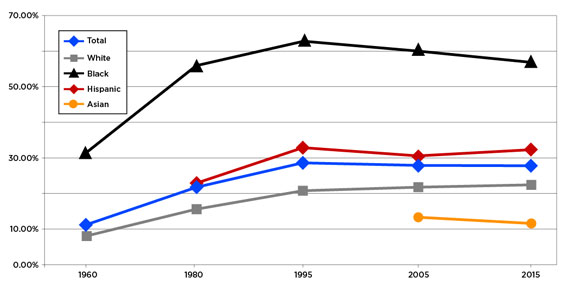 According to the U.S. Census Bureau, the percentage of children in the U.S. living without a dad began to soar in 1960. It rose unabated until 1995 when it suddenly hit the skids—sort of. For every five-year period from 1960 to 1995, the percentage rose. Since then, it has fallen and risen like clockwork. The result is a hold-steady pattern of 27.5 percent.

The good news is that the percentage of Black and Hispanic children living without a dad has fallen in the past 25 years. The drop for Black children from 62.8 to 56.9 percent is heartening because these are the children most likely to live without a dad. The drop for Hispanic children—ever so slight from 32.9 to 31.9 percent—is encouraging nonetheless. Even more good news is the percentage of Asian children living without a dad—tracked by the Census Bureau since 2005—has also fallen from 12.8 to 11.5 percent.

Now, you might wonder which children account for holding the overall percentage steady. It’s White children. Although less affected as a group by father absence than are Black and Hispanic children, a greater percentage of White children today (22 percent) live without a dad than in 1995 (20.8 percent).

Father absence is an enemy that wages a color-blind battle. It affects children of every race and ethnicity. It affects children in urban and rural areas. It affects every state and community. It wages a battle everywhere that leaves in its wake a range of poor outcomes for children, families and communities that include poverty, drug and alcohol abuse, poor academic performance, criminal behavior and suicide.

While we have held the line for the past quarter century, we must now push father absence back from whence it came.