Posted by Christopher A. Brown November 29, 2022
How to Advance Equity for Fathers in Human Services
If you’re a regular reader of this blog, you know that there’s a lack of equity in human services. Our nation’s human... END_OF_DOCUMENT_TOKEN_TO_BE_REPLACED
Posted by Erik Vecere November 22, 2022
Learn How A Crucial Partnership Will Open The Door to Reducing Child Abuse and Neglect
Posted by National Fatherhood Initiative November 15, 2022
Equipping Fathers and Organizations to Be More Father-Inclusive with Christopher Brown

How Your Vote in November Could Harm or Help Children

As we approach the culmination in November of yet another election cycle, I decided to stake stock of what so many people these days are voting against -- marriage. 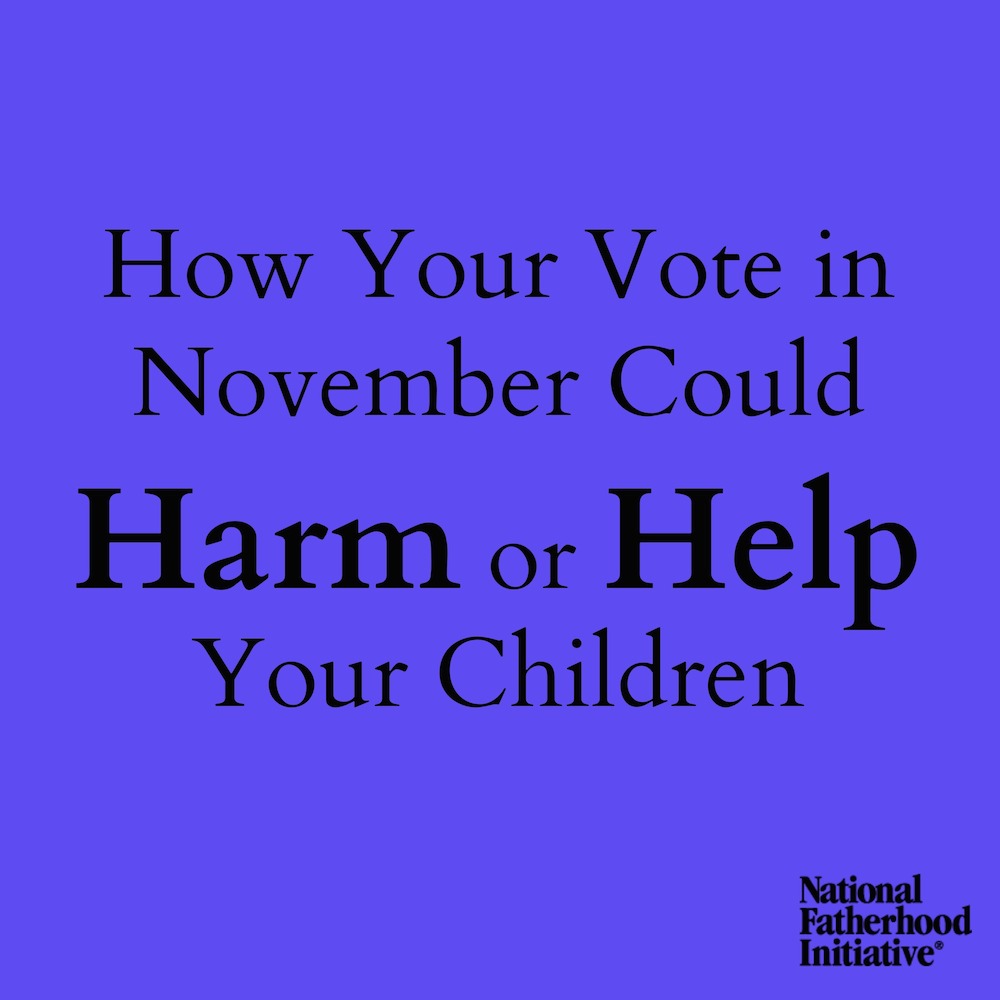 A recent analysis of census data by the Pew Research Center reveals that a record share of Americans have never married. In delving deeper into this milestone, the researchers found:

Unfortunately, the best intentions often go unrealized. Despite this lack of opposition to marriage among young adults, the "baby train" keeps rolling down the track. As I've noted elsewhere, out-of-wedlock births and age at first marriage are at all-time highs. Moreover, the average age of women when they marry has surpassed the average age at which they give birth to their first child. A primary cause of these trends is that Americans have increasingly "decoupled" marriage and child bearing so that marriage is no longer viewed as a necessary or even desirable context in which to bear and raise children.

The decoupling of marriage from raising children is, however, only one cog in the engine that has driven us to this point. A host of other changes in values, economics, and gender patterns have contributed as well. Many of those changes are good, needed. But what a cog this decoupling is because, sadly, it is children who ultimately suffer from and have no control over it. My concern is that the adults who have control over it now believe that the primary function of marriage is to benefit the adults who enter into it and not to raise the next generation of children. Far too many Americans continue to ignore (or not care about) the evidence that growing up in home with a single, never-married parent, with a once-married but now divorced parent, or with cohabiting parents places children at a higher risk of poor physical, social, and emotional outcomes, which primarily result from father absence. As the Pew Research Center report notes, fewer than half of the public believes we're better off when marriage and children are a priority.

The improvement of child well-being is why National Fatherhood Initiative exists and is why we're so adamant in our support of marriage as the ideal context in which to raise children. Whether a father is married to his children's mother is the most important predictor of his involvement in his children's lives.

It's also why we're non-partisan. Does that sound odd or surprise you? It shouldn't because this position is not just a conservative or a progressive one. It's both. Encouraging couples to marry before they have children is a cause everyone who considers themselves to be a conservative or a progressive (or anywhere in between) should rally around. A conservative should support this cause because it will help re-establish an institution that is in steep decline. Re-establishing marriage as a vital social institution will save government the money it spends on dealing with the consequences of the decline of marriage and the increase in father absence. A progressive should support this cause because it involves the social reform of an institution that is vital to advancing and improving our society. It would allow the government to shift the money spent on the consequences of the decline of marriage and high rate of father absence to improving our society in other ways, such as improvements to our nation's infrastructure and the environment.

So regardless of where you stand on the political spectrum, I encourage you to "vote yes" for marriage in the broad, societal sense. And as you consider for whom to vote this November, delve into how the candidates stand on the institution of marriage, and vote accordingly.