Posted by Christopher A. Brown November 29, 2022
How to Advance Equity for Fathers in Human Services
If you’re a regular reader of this blog, you know that there’s a lack of equity in human services. Our nation’s human... END_OF_DOCUMENT_TOKEN_TO_BE_REPLACED
Posted by Erik Vecere November 22, 2022
Learn How A Crucial Partnership Will Open The Door to Reducing Child Abuse and Neglect
Posted by National Fatherhood Initiative November 15, 2022
Equipping Fathers and Organizations to Be More Father-Inclusive with Christopher Brown

Humans and elephants both fare better with dads around 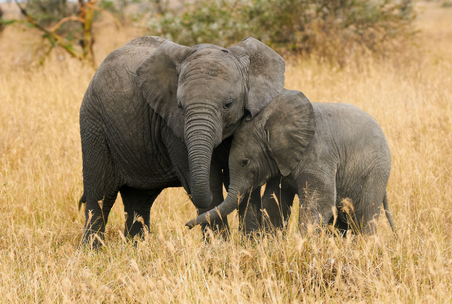 The former president of the National Fatherhood Initiative, Wade Horn, wrote an interesting article for Fatherhood magazine. Kruger National Park in South Africa had a serious elephant population problem. The once-endangered species was recovering to the point that the park could not support its herds. They worked with another wildlife refuge, Pilanesburg National Park, to relocate a good number of elephants.

A problem arose when the harnesses used for airlifting the pachyderms would only accommodate the females and the young. The super-sized bull males were simply too big for the harnesses. The herd was relocated, leaving the father elephants behind.

Something peculiar happened to the young male elephants in their new home. Without their father’s presence, they began displaying very un-elephant-like behavior, terrorizing the other animals, even goring rhinos to death.

Surprisingly, the calming influence of the female elephants had very little benefit to the young males. They needed role models to teach them how male elephants were supposed to act. Without those father figures in the herd, the hormonal young males let gang-like relationships rule the community.

In the Homo Sapiens’ world, we see a similar trend. Fatherlessness is rampant. Where fathers are absent, problems abound. Fatherhood.org lists very troubling statistics. Nearly 24 percent of children in the USA grow up in a fatherless home. Children without a father in the home are more likely to abuse drugs or alcohol, more likely to face abuse or neglect, more likely to have behavioral and mental problems, and four-times more likely to live in poverty.

The good news for us is that nearly 90 percent of Utah kids grow up with a father figure in the home. According to the raw statistical data, that bodes very well for our state and our local communities. It forecasts lower crime rates, fewer teen pregnancies, and higher rates of high school graduation. But I think there is far more importance to having a father in the home than merely tipping the tables on the stats.

What makes a father so important? Is it more than bringing bacon? What is it about that male figure that battles abuse, behavioral problems and poverty?

If you haven’t noticed, women are different from men. Personally, I don’t like making messes, playing with things that smell funny, or doing stuff that may end in an emergency room. That’s where my kids ask Daddy if he’ll help them. He’s the one who rides the four-wheeler, buys Skittles in 5-pound bags, and teaches about bows and arrows. He sits for hours on a river bank helping put worms on fish hooks. It’s not that I can’t do those things; they just don’t sound like fun to me. To my husband and kids, four-wheelers, Skittles, and arrows are wonderful ways to bond and grow.

The “24/7 Dad” Fatherhood Program indicates that fathers support growth and development of children in innumerable ways. Fathers demonstrate how to be “caring, compassionate people who treat themselves, others and the environment with respect and dignity.”

There is no replacing a father in his family role. A father is a teacher and a friend. He provides discipline with love. He is the super hero that every child looks to as they grow. We need them to lead out in the most important ways. Fathers teach their sons to be gentlemen. They model how men should treat women, which is vitally important to wives and daughters. They show what a good man acts like in his community.

I was moved at a funeral in which a good man’s son, daughters, and grandchildren expressed their love for their super dad. Phil Mitchell raised his children in a careful and caring way. His daughter claimed that as a child she had believed him to be Superman. Tall, handsome, athletic and kind, he was a hero to his kids. As a dad, he took time with each of his kids, especially his son. After being forced into early retirement due to aggressive cancer, he used his easy chair as the backdrop for spending time with his grandchildren. He played board games, shared treats, and told silly stories. He made those children feel like they were special. And they are.

One grandson tearfully recounted how Phil spoiled him on his birthday. “Grandpa knew how much I love dried marshmallows, so he got me my own dehydrator for my birthday. Now I can make them myself.”

Phil Mitchell is just one excellent example of why children need fathers. Because what mom or grandma in her right mind would get a kid a marshmallow dehydrator? Only a Super Man would know his grandson so well.

Fatherhood is more than strength and speed. It’s more than the ability to preside and provide. It is the gift of having young people follow where a good man leads.

In Pilanesburg National Park, park officials made the wise decision to get a super-sized harness and relocate the fathers with their herd. In a matter of weeks, the young were reformed. Balance was restored in the herd and the park. The fathers provided the guidance the young needed to become what they were meant to be.

In a world where problems envelop cities and countries, we can to take a page from the Pilanesburg pachyderms. Encouraging fathers to take their place as good leaders in our homes and communities will strengthen families, provide security for children, and model what a real life Superman should be.

This article was reposted with permission by HJnews.com and Kate E Anderson. She is a mother of five living in North Logan. She can be reached at katecole9@yahoo.com