Posted by Christopher A. Brown November 29, 2022
How to Advance Equity for Fathers in Human Services
If you’re a regular reader of this blog, you know that there’s a lack of equity in human services. Our nation’s human... END_OF_DOCUMENT_TOKEN_TO_BE_REPLACED
Posted by Erik Vecere November 22, 2022
Learn How A Crucial Partnership Will Open The Door to Reducing Child Abuse and Neglect
Posted by National Fatherhood Initiative November 15, 2022
Equipping Fathers and Organizations to Be More Father-Inclusive with Christopher Brown

Former NFI President and now board member, Roland Warren, recently wrote an article in The Huffingon Post titled "The Hole in Justin Bieber's Soul" where he explains what he thinks is missing in Bieber's life...and what us dads can learn from it.

Upon opening the magazine to find "a series of disturbing pictures of Bieber," he found the following paragraph:

Late on a Monday night in mid-January a slightly stoned Justin Bieber leans back on a couch in a North Miami strip club's weed-scented VIP room, casually accepting lap dance after lap dance... More than once, Bieber pauses mid-grind to lean over and fist bump his dad, a hard-eyed 38-year-old who's always up for some family fun. Jeremy Bieber split with Justin's mom when Justin was a toddler, and wasn't around afterward. But, he has, as of late, accepted the place of honor in his superstar son's entourage. The position comes with perks: Jeremy, a tatted up former carpenter and pro-am mixed martial arts fighter, sips beer while enjoying the overflow from his 19-year-old son's parade of strippers. 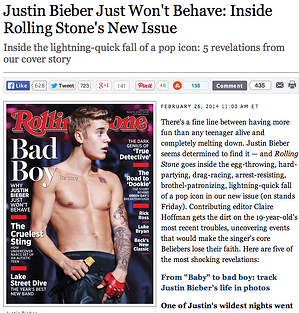 Roland points out that while he's not necessarily "in the 'Belieber' demographic," he has followed his rise from YouTube. Interestingly enough, Warren says of Beiber, "I was drawn to him and I soon found out why: Like me, he was a son who grew up without his father."

Mr. Warren doesn't mix words, writing: "I am a wounded soul and believe that Bieber is too. Why? Because a father's rejection is a deep, and often, unnoticed wound that can fester for years. I know mine did. Only someone who should love you deeply and unconditionally can hurt you deeply by rejecting you unconditionally."

Roland maps out his concerns about Bieber's growing celebrity, based on his decades of personal and professional experience of working with men affected by father absence. Two observations from Roland stand out to me. Warren says:

2) Bieber would probably let his father in—regardless how dysfunctional the relationship, and the objections of his mother.

Why did Roland make these two observations? Because as he points out, "there is a pull much stronger than the strongest mother's apron strings that beckons a son from boyhood to manhood. It's the pull of his father's 'presence,' even if his father is absent."

Roland understands from not only his own experience but from countless men he's worked with, that "A son has to make sense of his relationship with his father. He has to determine what it means to be a man...so, a boy's destiny is linked to his father's history."

Roland doesn't just leave us with cultural commentary; no, he provides answers as to what we should do as a community given that Bieber isn't alone. Sure, Bieber's a celebrity, but when it comes to boys who grow up without their dads at home, Bieber has a lot of company.

What are we to do with the "one out of three kids, two out of three in the African-American community, grow(ing) up in father-absent homes?"

Roland offers insight into what must be done to "heal the wounds of these boys:"

2) We must acknowledge the link between fatherhood and healthy marriages, because research shows marriage is the best societal glue to connect fathers to their children.

These lessons are discussed thoroughly in the book titled, Bad Dads of the Bible: 8 Mistakes Every Good Dad Can Avoid. But for our purposes here, please understand that Jeremy Bieber certainly made a mistake by abandoning his son. But, don't miss the other lessons around this unfolding story. Justin's dad (Jeremy) "has committed other mistakes as well," as Roland writes:

You see, a good father doesn't exploit the hole in his son's wounded soul to enjoy the "overflow" of his son's reckless response to his father's absence. He is careful to be a healer, not an enabler of bad behavior. Moreover, a good father provides, nurtures and guides. He doesn't prey on his child's vulnerabilities and insecurities. After all, there is a long line of folks willing to do this, especially if you're Justin Bieber. You see, Justin Bieber doesn't need his father to be his lap dance pal or pot-smoking buddy. He needs Jeremy Bieber to be a good dad now. He needs his father to grow up, step up, and "daddy up" before it's too late. So, why won't Justin Bieber behave? Unfortunately, the sad answer is just a fist bump away.

Dad, use this story as a reminder, that you and I are just a few decisions away from missing something.