Posted by Christopher A. Brown November 29, 2022
How to Advance Equity for Fathers in Human Services
If you’re a regular reader of this blog, you know that there’s a lack of equity in human services. Our nation’s human... END_OF_DOCUMENT_TOKEN_TO_BE_REPLACED
Posted by Erik Vecere November 22, 2022
Learn How A Crucial Partnership Will Open The Door to Reducing Child Abuse and Neglect
Posted by National Fatherhood Initiative November 15, 2022
Equipping Fathers and Organizations to Be More Father-Inclusive with Christopher Brown

Kelly Clarkson performed her new hit song "Piece by Piece" on the February 25th episode of the 15th and final season of American Idol. There was hardly a dry eye in the house. Keith Urban was especially moved. He couldn't hold back his tears. Even Ms. Clarkson had a trying time singing the song all the way through. She received a standing ovation at the conclusion of this moving performance.

"Piece by Piece" is the title track from Ms. Clarkson's first album of original songs in four years. What's she been doing all that time? Still performing, for sure. Her primary focus, however, has been stepping into the role of her lifetime: being a stepmother to her husband's two children and a new mom to her own child. If you saw her performance--and you have to watch it--you know her second child will soon say hello to the world. What has happened to transform her life since her last album is key to understanding why "Piece by Piece" is her most emotional song yet. 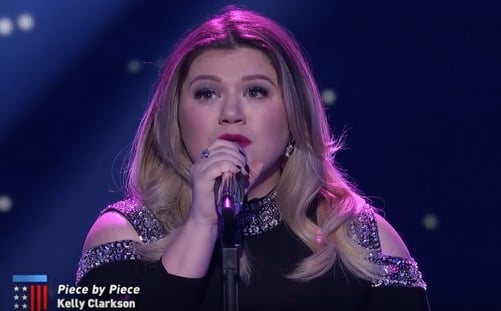 On the surface, "Piece by Piece" sends a message about the vital role fathers can and should play in children's lives. The song compares the deep involvement of her husband Brandon Blackstock in the lives of their children with the lack of involvement of her own father. Ms. Clarkson's parents divorced when she was only 6 years old. The breakup of her parents resulted in the breakup of her family. Ms. Clarkson and her siblings were sent to live with different relatives, scattered in so many pieces. While the title of the song refers to how her husband's love restored a broken woman who was in pieces, it could very well refer to the breakup of her family.

But that clear, critical message is only the lead in to an arguably deeper more powerful message: the redemption that can eventually arrive for a child who grows up with a poor or absent father. Indeed, we only need to closely listen to the lyrics to receive it:

But piece by piece you collected me

Up off the ground but you abandoned things

At six years old and no

He never walks away

He never asks for money

He takes care of me

He restored my faith

That a man can be kind

And a father could stay

Those last three lines say it all. There is hope for many of the 24 million children today who grow up without their father to be redeemed -- restored to wholeness in Clarkson's eloquent lyrics -- through a relationship they will eventually experience as an adult. The relationship might take the form, as in Clarkson's case, of a marriage in which the father of a woman's child restores her faith in men and fathers.

For a man abandoned by or who had a poor relationship with an emotionally and spiritually absent father, he can be redeemed through his own involvement in the life of his own child. For still others -- women and men -- redemption can arrive through the least expected source: an opportunity to establish an intimate relationship as an adult with the man whose absence so profoundly affected them. Such was the case with me.

I say thanks to Kelly Clarkson for showing us all that hope springs eternal. Please join me. Share this post and the video of her performance with anyone you know who needs to receive this deep, powerful message.

Watch the full video from the American Idol performance here...