Posted by Erik Vecere November 22, 2022
Learn How A Crucial Partnership Will Open The Door to Reducing Child Abuse and Neglect
Imagine my excitement when I received word that an organization called SCAN (Stop Child Abuse and Neglect) wanted to... END_OF_DOCUMENT_TOKEN_TO_BE_REPLACED
Posted by National Fatherhood Initiative November 15, 2022
Equipping Fathers and Organizations to Be More Father-Inclusive with Christopher Brown
Posted by Melissa Byers November 9, 2022
Trauma-Informed Care for Fathers and Families [Training + Free Resource]

While Wilmington, DE has a High Rate of Father Absence, it Also Has One of the Best Fathers

Wilmington, DE has one of the nation's highest rates of father absence in our nation (65.5%), followed closely by Detroit, MI (63.3%), and Birmingham, AL (61.5%). That's why when we hear a father-son story of healing, reconciliation, and connection coming out of this town, we've got to proclaim it from the rooftops! (OK, maybe not the rooftops, but indulge me for a minute.)

This story will forever change your perspective on father absence and incarceration. It demonstrates how a person - and a relationship - can come out of the ashes. That relationship is a seed that can find life with commitment and determination.

So let's go back to Wilmington, DE where the story begins with, “ I’m this 18-year-old drug dealer, and I’m stressed out of my mind worrying about myself, my future, my child, and these kids are looking up to me, because I’m the leader at this point.”

Much of the below originally appeared in a 2014 Newsweek article, MURDER TOWN USA (AKA WILMINGTON, DELAWARE).

“Fundamentally,
we’ve got to fix men and fatherhood.”

Delaware’s recidivism rate is staggeringly high—nearly 70 percent of men released from jail will return within three years. In Wilmington, when these men return home, they find themselves in communities where 6 out of 10 men are either not participating in society or simply not around (i.e., incarcerated). “I don’t think the threat of incarceration is big enough. Because [a lot of these men are] hopeless,” says Charles Madden, executive director of the HOPE Commission which opened its doors last April 2014, mentors men returning home from prison. “Fundamentally, we’ve got to fix men and fatherhood.”

Sentenced to 16 years in prison.

One of those men, Coley Harris, (appearing as himself in the new film Out Of The Ashes: Where a Seed Finds Life recently released on DVD by NFI), represents the worst [a dad] can be and the best [a dad] can become. Coley grew up in a small row-house neighborhood wedged between two housing projects. His family went to church.

By the time he was in middle school, he had turned to the streets. Coley staged his first robbery when he was 12. He started skipping school, smoking weed. He also watched older guys make serious money selling cocaine and heroin.

By the time his son was born, in 1991, Coley was doing pills, snorting cocaine and drinking. “I’m this 18-year-old drug dealer, and I’m stressed out of my mind worrying about myself, my future, my child, and these kids looking up to me, because I’m the leader at this point.”

In 1994, he shot and killed someone at a local barbecue, pleaded guilty to second-degree murder and concealing a deadly weapon and was sentenced to 16 years in prison.

His son was a stranger.

Coley was released in 2008, after serving 14 years. He was 34. Although his son visited occasionally while he was in prison, his son was a stranger.

But it wasn't until Coley got out of prison that the story really begins.

Chronicled in Out Of The Ashes: Where a Seed Finds Life, this new film details the struggle both men faced as they navigated their 14 year separation and reunion. Consequently, it symbolizes the struggle faced by incarcerated fathers and their children. To complement the film, NFI created a Facilitated Discussion guide to help incarcerated fathers, their children, and family members explore the issues, thoughts, and feelings caused by the father absence associated with incarceration. And to begin healing.

Their love is solid.

Today, Coley and his son are working to deepen their relationship. It takes diligence, perseverance, and forgiveness on both of their parts, but through encouragement and by challenging one another to excel, their love is solid.

Coley now works as the Director of Community and Special Programs for a national human services organization. In his "free time", Coley works with Cease Violence Wilmington, Make Your Mark Voter Registration Campaign for returning citizens, is a Victim Sensitivity guest speaker and guest lecture for the University of Delaware Black Americans Studies.

Coley's efforts to "pay it forward" by giving back to his community and being the best father he can be are to be commended.

“There’s a large population of disenfranchised, poor, misguided young boys in this city who are dangerous,” Coley says. “I say that with empathy, because they didn’t wake up like that. It’s a direct result of neglect that came through the crack/cocaine/war on drugs era. It’s a result of guys like me causing hurt and harm on other people.

“I’m not proud of my past, but I have to share it because there’s a lot of young guys out here who believe life is over at a young age, just as I did. Listen, I was a shooter. When I was in the game, I was all the way in. But you never know the course your life will take. People or circumstances will stop you and spin you in totally different directions.” 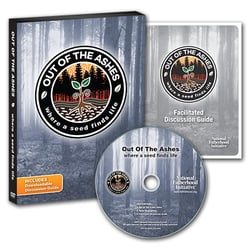 Learn more about Coley's story by watching the Out Of The Ashes: Where a Seed Finds Life trailer here on FatherSource®.