Posted by Christopher A. Brown January 31, 2023
The Value in Customizing a Fatherhood Program
There’s a lot of emphasis these days on implementing fatherhood programs with fidelity. Indeed, many funders of... END_OF_DOCUMENT_TOKEN_TO_BE_REPLACED
Posted by Ave Mulhern January 24, 2023
A Few of My Favorite Things… and they are FREE!
Posted by Christopher A. Brown January 17, 2023
How Father Involvement and Bi-Strategic Parenting Positively Affect Children’s Brain Development

A little more than two months ago, I posted an article on the horrible portrayal of fathers in TV ads by Lowe's and LG. As I noted in that article, the Lowe's ad in particular was one of the worst I've seen in my nearly 15 years of work at National Fatherhood Initiative (NFI).

As fortune would have it, not soon after the release of those ads, General Mills Canada launched a web-based campaign for Peanut Butter Cheerios anchored by a series of ads that portray fathers in a completely different, positive light. Known as the #HowToDad campaign, it might be the best father-focused campaign for a consumer brand I've seen. The fact that General Mills Canada produced a series of ads within a broader web-based campaign is very important, but more on that later. 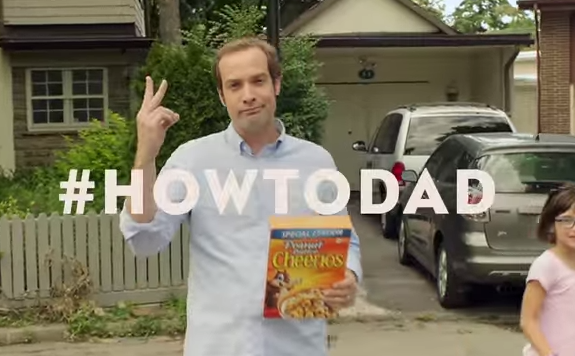 The Lowe's ad is, unfortunately, all too common in its portrayal of a dad as an irresponsible, untrustworthy, incompetent adolescent whose children must be rescued by a responsible, trustworthy, competent mom. What makes this ad and the LG ad so insidious is couching the portrayal of the dads within humor because, these companies reason, the use of humor makes it perfectly fine to reinforce this notion of dads as poor parents, all in the name of selling products to moms. (As I pointed out in the article, this approach is disrespectful of moms as well.) Indeed, when NFI contacted Lowe's to voice our disapproval of their ad, Lowe's simply said they were sorry that we took the ad the wrong way, that their portrayal of the dad was all in fun and meant no harm, and that they had no intention of pulling the ad. Interestingly, we didn't ask them to pull the ad. Perhaps they were a bit defensive given their receipt of a petition signed by NFI and other organizations throughout the U.S. and Canada that called Lowe's out on the ad. (For details on the petition, see my previous article.)

At any rate, the #HowToDad campaign turns the tables by showing that dads are competent parents. The campaign transforms Peanut Butter Cheerios into the "Official Cereal of Dadhood." In doing so, General Mills Canada recognizes that the company doesn't have to denigrate dads to sell a product. This campaign reflects the growing influence of dads as moms' partners in raising children in all aspects of domestic life. Dads have taken on a steadily increasing share of the parenting load in recent decades. Dads spend more time than ever with their children generally, grocery and retail shopping for the family, and doing housework (e.g. cooking and cleaning). Dads are also more focused than ever on the desire to balance work and family. Indeed, they're often more conflicted than moms in this regard.

In addition to the overall portrayal of fathers, what I really appreciate is how General Mills Canada uses humor to portray fathers in a positive light -- a stark rebuke to the use of humor in ads like those of Lowe's and LG. I also appreciate that the campaign uses social media to share this positive portrayal across multiple channels used by people of all ages. The #HowToDad campaign is a comprehensive web-based campaign that, in addition to the ads, includes static images, infographics, and videos (e.g. of dads doing inspirational activities with their children) that visitors can share across multiple social media platforms.

It's this kind of campaign for a consumer brand that can make a difference in reinforcing the vital role played by dads. Because consumer brands are bellwethers of popular culture, they have a huge impact on cultural norms including those around parenting. That's why, in the coming weeks, NFI will present a National Fatherhood Initiative Fatherhood Award to General Mills Canada. It's vital that we recognize positive portrayals of dads wherever we see them and call out companies that do dads, moms and children a disservice. Join me in #HowToDad.