Posted by Christopher A. Brown January 31, 2023
The Value in Customizing a Fatherhood Program
There’s a lot of emphasis these days on implementing fatherhood programs with fidelity. Indeed, many funders of... END_OF_DOCUMENT_TOKEN_TO_BE_REPLACED
Posted by Ave Mulhern January 24, 2023
A Few of My Favorite Things… and they are FREE!
Posted by Christopher A. Brown January 17, 2023
How Father Involvement and Bi-Strategic Parenting Positively Affect Children’s Brain Development

“Yeah, it’s the end of the world.” > Providing Kids with a Lesson in Resiliency 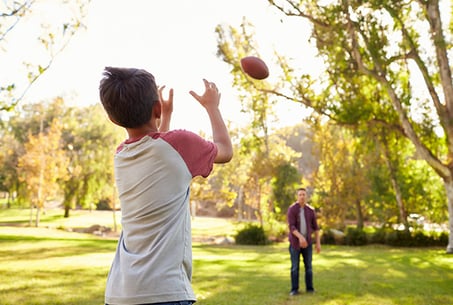 It was a chilly November Sunday at the local high school with the three Nelligan boys. We’d had contests to see which duo could get 100 consecutive throws of a lacrosse ball without a drop, played the end-zone tackling game, kicked footballs through the uprights using my left shoe as a tee, and ran sprints up and down field. Most fun of all was throwing routes to the boys, even though I have an erratic arm.

The afternoon was winding down and as a regular ritual end to the weekend, I said, “Hey, two more completions and then let’s go get those donuts. Go long, pal” I said to one son and then I unleashed a rainbow throw down field.

As the middle kid maneuvered under the long pass, my two other sons were visibly upset. “But Dad,” said the eldest in desperation, “You got fired from your job!”

“Yeah, it’s the end of the world,” I replied automatically, watching my pass sail three feet beyond the middle kid’s out-stretched arms.

Junior was correct - I had just been fired, one of the casualties of what happens when your guy finishes on the south side of an election. It was true adversity (what the kid didn’t even know was the employment scene for my particular skills was awful) and the whole family was increasingly anxious about finances, which was captured by my son’s comment.

“OK men, let’s have a seat in my office,” I told them and we sprawled out at the 50-yard line.

“Look guys, I’m not going to give you any fairy tales. Yeah, we all know I’m out of work. But I’ll find a job – you know I’m gonna rally. I have you guys to keep me company and besides, you saw me at QB today – I need to work on my throwing arm. So yeah, it’s the end of the world. Now let’s go get those donuts and when we can’t afford it, I’ll let you know.”

What a ridiculous, crazy laconic utterance, framed between a lost job and a bad pass. I couldn’t ignore the obvious but I was determined to set an example of calm, lower the temperature bigtime, even get a laugh out of it. Perspective, folks: Nothing is ever as bad as it seems. Everyone has tough times and there are only three choices: Lie to yourself, wallow in self-pity, or drive forward.

Acknowledging my situation with equanimity was the best way to prove a point to the boys and the light, sardonic utterance had an effect. “Yeah, it’s the end of the world.” It completely deflated the drama balloon. Almost instantly, the boys began repeating the phrase about small and big problems they faced.

I know for a fact that just one of the boys saying the phrase, even with casual grimness, made that kid feel stronger, more independent in confronting the challenge. No immediate running to a parent with panic; no moping about or spectacles, no days’ long despair. The old man had accepted his failure and was prepared to move forward. Through my example, however tough, my sons realized they could try to have the same resiliency.

Seven years later it was summer and we were at the same field on which I’d proved a second-rate QB but a candid Dad. The boys were bigger, faster and stronger and I was employed (thank God the post-election employment hiatus hadn’t lasted too long).

We were horsing around, doing sprints from goal line to goal line and whereas years ago, I could hold my own, now even the youngest was beating the old man. Afterwards, we were lying on the turf, all four Nelligans staring at a clear afternoon sky, exhausted and satisfied. “Almost donut time,” said the middle kid. Then the eldest suddenly said, “Remember that time when you were fired and I was worried about us having money.” “Like yesterday,” I replied. Then the youngest said, “Back then, you were faster but we’re all faster than you now.” “Yeah,” I replied, “it’s the end of the world,” prompting howls of joyful laughter.

Jeff Nelligan is the father of three sons; the two eldest are graduates of the U.S. Naval Academy and Williams; the third is at West Point. Nelligan is the author of Four Lessons From My Three Sons: How You Can Raise A Resilient Kid (Amazon Books). He writes at www.ResilientSons.com