Posted by Christopher A. Brown January 31, 2023
The Value in Customizing a Fatherhood Program
There’s a lot of emphasis these days on implementing fatherhood programs with fidelity. Indeed, many funders of... END_OF_DOCUMENT_TOKEN_TO_BE_REPLACED
Posted by Ave Mulhern January 24, 2023
A Few of My Favorite Things… and they are FREE!
Posted by Christopher A. Brown January 17, 2023
How Father Involvement and Bi-Strategic Parenting Positively Affect Children’s Brain Development

Sometimes the simplest changes can have a big impact. Such is the case with planning prompts, which involve prompting people to plan when they’ll follow through on and engage in a beneficial behavior. 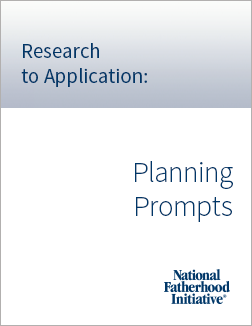 Research on the use of planning prompts to increase healthy behaviors, such as getting flu shots and colonoscopies, has shown that simply having people write down the date and time when they’ll engage in a healthy behavior dramatically increases engagement in that behavior.1 Prompts work well even when people create them in private. But there is the potential that they can be even more effective when combined with another small change that research has shown increases people’s commitment to engaging in a specific behavior: making a commitment public (i.e. making it in front of/in the presence others).2

The reason that planning prompts work whether people make them privately or publicly is the desire for humans to remain consistent with their commitments (i.e. to stick to their commitments). Think about when, during a political campaign, one politician running against another accuses his or her opponent of “flip-flopping.” The accused typically denies flip-flopping. The media jump all over this development in a political campaign and unwittingly pour gas on the fire by looking for evidence that the accused politician has changed her or his mind “as the political winds blow,” even in the face of evidence that should have led to a change in position.

Why is it that this tactic is so often applied in political campaigns? The reason is people want their politicians to be consistent with their commitments. Moreover, the public nature of politics makes changing position even more difficult for a politician. As a result, the media and public tend to ignore cases in which there is clear evidence that a politician should have changed his or her position. Simply accusing an opponent of flip-flopping is all a politician needs to do to discredit an opponent.

The good news is the need for people to be consistent with their commitments can be leveraged for good as well as ill, especially when commitments are made public. This small change has been used successfully in contexts as different as doctors’ offices and hotels. Patients asked by healthcare staff to write down the date and time of their next appointment on an appointment card, rather than the healthcare staff filling out the card, and hotel guests asked by hotel staff at check-in to commit to reusing their towels, and then given a badge indicating that commitment, have increased appointment show rates and reuse of towels, respectively.3 The public aspect of these commitments is when patients and customers make them in front of staff.

When it comes to working with fathers individually or in groups, you can use knowledge of planning prompts to more effectively work with them. Here are a few ideas:

Regardless of how you apply the knowledge of planning prompts, approach your effort as an experiment. Keep track of what works with fathers in general and with specific kinds of fathers (e.g. custodial and non-custodial) so that you can apply what works in future work with fathers one-on-one or in groups, and avoid what doesn’t work.

As you consider using the knowledge of planning prompts to improve your work with fathers, consider the following resources:

Don’t forget to look for more posts and reference guides in this series...

3) Research to Application > Framing and the "No Choice Option"

4) Research to Application > The Power of The "Deviant Dad"

About the "Research to Application" Series

The series offers a platform for generating dialogue among NFI, organizations, and practitioners on ways that research can be applied to addressing pain points in serving fathers. This post is the seventh one in the series. It provides ideas on how you might integrate research on planning prompts. Integrating this research could make you more effective in your work with fathers (e.g. facilitating a fatherhood program or working with fathers one-on-one).