Posted by National Fatherhood Initiative May 24, 2022
The State of Moms and Dads in America (2022)
This article is written by Mike P. Taylor and was originally published at the Dad Well Done. It is republished here... END_OF_DOCUMENT_TOKEN_TO_BE_REPLACED
Posted by Christopher A. Brown May 17, 2022
Here’s What We Know About the Work of Federal Fatherhood Grantees
Posted by Ave Mulhern May 10, 2022
3 Ways to Keep Fatherhood Program Group Sessions Focused and on Track

Spotlight > Teen Dads in Texas are Getting the Help They Need

I get this question often by phone and email, "Do you have any programs to help teen dads?"

My answer is "Yes!" Which is why I'm excited to see the work Martin Castaneda is doing in Midland, Texas. In this post, you will see how he is using the 24/7 Dad® program to help teen dads. 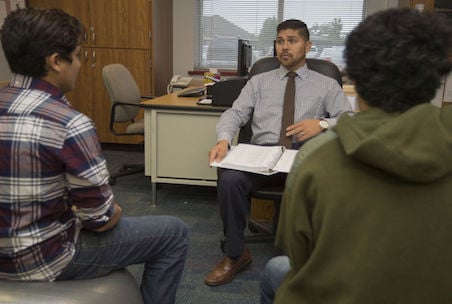 We have written on The Father Factor about more organizations seeking to help teen dads as well as about teen dads Martin has previously helped. Martin Castaneda is the fatherhood engagement coordinator for First 5 at University of Texas of the Permian Basin. The full article for this post recently appeared here.

Midland students who are fathers can now opt to join parenthood classes. The district launched the 24/7 Dad® program last Monday to provide support for teen dads until high school graduation.

Martin Castaneda said there was a need to introduce a program for teen dads in Midland schools. “We found it was one of the most underserved demographics out there,” Castaneda said. “We thought we should help those guys, seeing that fathers have an impact on a child’s life.”

“We found it (teen dads)

was one of the most underserved

Any male Midland student who is expecting or has a child can voluntarily join the program. Sessions are offered once a week at Coleman, Lee and Midland high schools during rotating class periods. Discussion topics include pregnancy, discipline and relationships with female partners.

“There’s not only a mentor they can come meet with, but peers as well,” Mills said. “They didn’t know about each other. It’s good for them to know they’re not going through it alone.”

For the sessions, First 5 uses National Fatherhood Initiative’s 24/7 Dad® program. Castaneda said his organization was the first in Texas to offer the program to fathers in high schools.

Midland had about 60 pregnancies last school year, according to a previous Reporter-Telegram article. That number was a drop from 156 pregnancies during the 2011-2012 school year, when the district introduced abstinence-based sex education programs.

“Teen parenthood is a growing thing,” Castaneda said. “The numbers have gone down nationally, but in Texas, still, rates are high for teen pregnancies. I’m hoping to get the message to those it’s too late for, and I hope they will pass it along to their friends.”

Midland already offered support for female students, but last year the district considered ways to engage teen dads. When the district looked for programs, the 24/7 Dad® curriculum stood out.

The Life Center runs Mothering as Responsible Youth (MARY), a mentoring program for teen moms in the area. Misty Stewart, MARY coordinator, said she plans to encourage group members to tell the fathers of their children about 24/7 Dads.

“Martin is working to keep dads in school, and I’m doing the same with the moms,” Stewart said. “That’s good for their kids.”

Coordinators for 24/7 Dad® began informing teen dads about the program this past week. But Castaneda said it’s difficult to find participants. He encourages people who want to join to email him at castaneda_m@utpb.edu.