Posted by Christopher A. Brown May 17, 2022
Here’s What We Know About the Work of Federal Fatherhood Grantees
Have you ever wondered what the organizations that received federal funding to implement responsible fatherhood (RF)... END_OF_DOCUMENT_TOKEN_TO_BE_REPLACED
Posted by Ave Mulhern May 10, 2022
3 Ways to Keep Fatherhood Program Group Sessions Focused and on Track
Posted by Christopher A. Brown May 3, 2022
The Secret Sauce of Successful Fatherhood Groups

What's Mom Got to Do With It?

I was at an acquaintance's house the other night, and the inevitable question, "What do you do for a living" led to an unending story of a father who was denied access to his child(ren) by the mother - for all sorts of reasons.

I heard about the endless heartache he suffered trying to be involved in the child's life, which lead to his frustration, and eventual hopelessness and realization that he would never have easy access to his child.

Now, we all know there are two sides to every story, but this scenario is all too common. 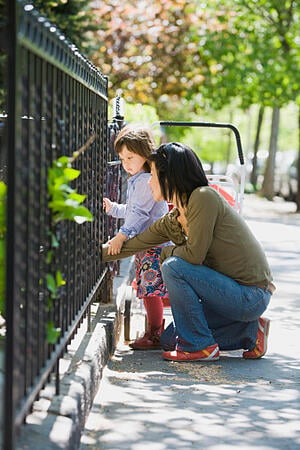 When I tell people that NFI develops and distributes curricula to help organizations across the nation work with dads to increase their involvement, I often get the follow-on question, "Well, what about the moms who don't let them be involved?"

Enter the discussion of "maternal gatekeeping", which refers to a mother’s protective beliefs about the desirability of a father’s involvement in their child’s life, and the behaviors acted upon that either facilitate or hinder collaborative childrearing (often called “shared parenting” or “co-parenting”) between the parents. Maternal gatekeeping occurs regardless of whether parents are married, divorced or unmarried, and regardless of the parents’ satisfaction with the relationship between them.

Let me clarify - this is not a discussion about the court system and its challenges. We're talking about the part of the father-child relationship over which a mother has some control - where she has the choice to be a gateway or a gatekeeper to dad's involvement. Specifically:

How Does this Happen?

In most married or cohabiting American families, mothers and fathers divide their family roles and tasks to achieve maximum efficiency as they raise children. Even when parents expect during pregnancy that they will divide employment and family roles evenly, most new parents take on gender stereotypic roles after the birth of their first child and thereafter (Cowan & Cowan, 2000). Even when both parents work outside the home, fathers more often take on the dominant role as economic provider. Regardless of how much each parent works outside the home, mothers generally assume primary responsibility for childcare and associated responsibilities inside the home. In divorced and unmarried families, mothers most often assume legal guardianship of children. Consequently, children most often reside with them, resulting again in mothers’ assumption of primary responsibility for their care on a daily basis.

Despite an increase in joint custody and the recognized importance of fathering among divorced, separated, or never-married couples, mothers continue to typically serve as the primary caretakers of children, particularly in their children’s early years. Even when mothers and fathers are equally or near-equally involved in raising children, mothers often feel a sense of ownership or that they have primary rights toward the children in comparison to fathers. This feeling can result from some combination of biology (mothers carry the children in pregnancy and give birth) and social roles selected by many parents—and reinforced by societal expectations—that currently sanction mothers over fathers as primary caretakers of children.

Why Does it Happen?

The motivations for maternal gatekeeping vary widely. They depend on individual, couple, and familial circumstances and situations. Mothers might have a difficult time relinquishing familial responsibility, might want to validate their identity as “the mother” and garner recognition for their “maternal” or “feminine” contributions to the family, or might view the father as incompetent or even dangerous to the child. This latter view might be based either on actual evidence, the father’s past behaviors, or her personal perceptions of him and his failures in the male familial role.

Furthermore, she might be protective of her child purely as a function of the child’s age. If the child is not old enough to verbalize his or her own needs and desires, she might feel qualified to make decisions and judgments for that child, thus becoming the monitor, supervisor, permission grantor, and controller of all others’ involvement with the child—including the father’s. There are likely "good" intentions here.

However, when the father is less involved in raising his child or finds his access to his child constantly hindered and blocked by the gatekeeping actions of the mother, the ability of the child to adjust to parental divorce is weakened. The gatekeeping can damage the father-child relationship and the parents’ ability to cooperate and keep their conflict levels low and out of the child’s earshot or awareness. It is well established that conflict, low levels of cooperation, and less father involvement contribute to the child’s academic, behavioral, and social difficulties in the short and long term. Maternal gatekeeping therefore poses an important and powerful threat to the vitality of the father-child relationship and the overall well-being and adjustment of the child.

So we're back to helping fathers be involved in their children's lives. We need to discuss positive gatekeeping and its result.

Studies have demonstrated that when mothers perceived their partners as motivated and competent to engage in child care responsibilities, fathers were more involved in childcare (benefitting mom!). The father-child relationship is thus based on a triangle that includes father, child, and mother. In research on divorced parents, positive gatekeeping (that which supports and facilitates shared parenting) is linked to the mother’s beliefs about the importance of the father’s involvement and her duty to help nurture and facilitate it. The fathers’ positive gatekeeping response is linked to his acknowledgment that the mother’s role in his relationship to his child is a real and valid one.

As a Fatherhood Practitioner, What can You do About It?

Begin educating mothers on the importance of father involvement. Work directly on the maternal gatekeeping topic addressed in NFI's popular FatherTopics Workshop Mom as Gateway or in a deeper way with Understanding Dad: An Awareness and Communication Program for Moms. You may even find that your staff members could benefit from a better understanding of maternal gatekeeping, and how to help moms understand the importance of dad's involvement. Your personal and organizational goals to increase father involvement in the lives of children in your community will thank you.

Download your free sample of "Mom As Gateway" here.