Posted by Christopher A. Brown November 29, 2022
How to Advance Equity for Fathers in Human Services
If you’re a regular reader of this blog, you know that there’s a lack of equity in human services. Our nation’s human... END_OF_DOCUMENT_TOKEN_TO_BE_REPLACED
Posted by Erik Vecere November 22, 2022
Learn How A Crucial Partnership Will Open The Door to Reducing Child Abuse and Neglect
Posted by National Fatherhood Initiative November 15, 2022
Equipping Fathers and Organizations to Be More Father-Inclusive with Christopher Brown

Why Horseplay is Vital for Your Kids

When my daughters were toddlers and preschoolers, I played a game with them called "Attack Baby." I'd lie on the floor and let them run at and jump on me. They'd scream at the top of their lungs as they ran toward me. Right after or right before they landed on me, I'd pick them up and throw them to either side of me. (Don't be appalled. I gently laid them on the ground so they'd roll safely across the floor.) Every once in a while, I'd include a tickle or two before I discarded them to either side of me. As I did so, the attacking screams turned to joyful laughter. 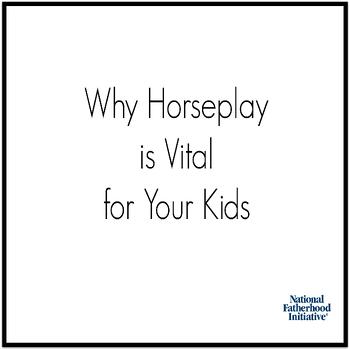 The objectives of the game for them were to have fun and do as much damage to their dad as possible. My objectives were to help them learn the joy of physical play and how to play and not hurt someone in the process (i.e. learn emotional self-regulation). They sometimes lost control, particularly when they'd gang up on me. My youngest, in particular, would sometimes launch herself feet first and try to pound on my chest or head. Whenever they got out of control and became too physical, I stopped the game and explained that they needed to regain control or that session of Attack Baby was over. As time went by, they learned how to control themselves more consistently and still have a blast. To this day, some 15 years later, they remember Attack Baby with fondness and tell new friends, when describing their relationship with me, how much they enjoyed it.

In the Art of Roughhousing, Dr. Anthony T. DeBenedet and Dr. Lawrence J. Cohen reveal the benefits of horseplay (rough-and-tumble play), such as how it develops close connections between parents and children, helps solve children's behavior problems, and boosts children's confidence.

Roughhousing is interactive, so it builds close connections between children and parents, especially as we get down on the floor and join them in their world of exuberance and imagination. Most important, roughhousing is rowdy, but not dangerous. With safety in mind, roughhousing releases the creative life force within each person, pushing us out of our inhibitions and inflexibilities... Play -- especially active physical play, like roughhousing -- makes kids smart, emotionally intelligent, lovable and likeable, ethical, physically fit, and joyful... Roughhousing activates many different parts of the body and the brain, from the amygdalae, which process emotions, and the cerebellum, which handles complex motor skills, to the prefrontal cortex, which makes high-level judgments. The result is that every roughhousing playtime is beneficial for body and brain as well as for the loftiest levels of the human spirit: honor, integrity, morality, kindness, and cooperation.

Unfortunately, this art is becoming a lost one as video games and other technology-based activities play an ever-increasing role in children's lives. Moreover, other changes in children's environments that facilitate horseplay have faded or disappeared, such as schools reducing or eliminating recess and physical education.

But another truly unfortunate factor in this development is the hyper-focus of so many parents today on their children's safety, a focus that negatively impacts their daily interactions with their children.

Sadly, among many of today's families, roughhousing barely limps along on life support. What was once a motto of Safety First has evolved into a fretful new motto of Safety Only. Many parents are more frightened by skinned knees and bruised feelings than life's real dangers: stifled creativity and listless apathy.

This hyper-focus on children's safety is an outgrowth of how parents today over-protect and over-schedule their children's lives. So it's not surprising that children's playtime has, as the authors point out, become "adult-organized, adult-refereed, and adult-structured." Parenting as protection has taken on huge significance despite the fact that the world of today is no more dangerous than in the past. In fact, it's safer for children. Data from the National Center for Health Statistics show that the death rates for children caused by unintentional injuries (e.g. vehicle-related, drowning, and fires) and murder were lower in 2010 compared to 2002. The reduction in deaths of 32 percent from unintentional injuries is staggering! Also staggering is the reduction in murders over an even longer time period. Among teens 15-19, for example, the reduction was 63 percent between 1993 and 2012 and was, in 2012, at its lowest level since before 1970.

I'm not arguing that parents shouldn't be concerned for their children's safety. Situational safety has its place. Being chronically concerned about children's safety does not. Children will get hurt. Bruises, abrasions and broken bones are a natural part of childhood. Parents shouldn't be so concerned about safety that they don't allow their children to be, well, children. Children are wired for horseplay with their parents and other children. It's one of the ways they learn about their world, how to appropriately interact with others, and to have fun. So by all means, enjoy playing a little roughly with your children on a regular basis, and get off the hyper-safety bandwagon.

When is the last time you spent time on the floor playing with your kids?